Accessibility links
U.S. May Need Chinese Money To Build Expo Pavilion In 400 days, the 2010 World Expo opens in Shanghai. So far, 185 countries have signaled they will attend, but the United States hasn't been able to raise enough money to confirm its attendance. In fact, the U.S. may be considering a loan from China to participate. 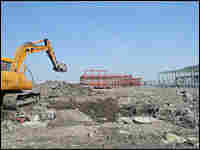 Construction has not yet begun on the proposed U.S. pavilion for the 2010 World Expo in Shanghai. The U.S. team still needs to raise $61 million to begin work on the site, which at 60,000 square feet is one of the Expo's largest. Louisa Lim/NPR hide caption 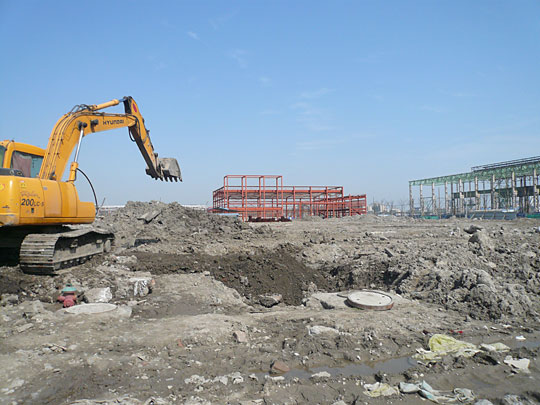 Construction has not yet begun on the proposed U.S. pavilion for the 2010 World Expo in Shanghai. The U.S. team still needs to raise $61 million to begin work on the site, which at 60,000 square feet is one of the Expo's largest. 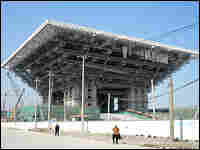 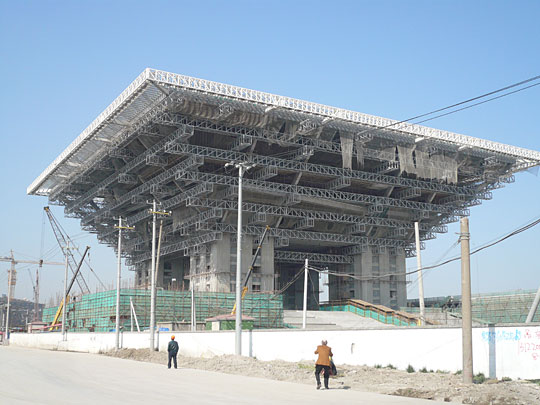 In 400 days, the 2010 World Expo opens in Shanghai. China is spending $4 billion, by some estimates twice the price tag of the Olympics, on the six-month-long international exhibition.

So far, 185 countries have signaled they will attend — but not the United States, which hasn't confirmed its presence. In fact, the U.S. may be considering a loan from China in order to attend.

Meanwhile, in the heart of Shanghai, a single small excavator digs forlornly away at a flat, empty construction site. This 60,000-square-feet spot is reserved for the site of the U.S. pavilion for the Expo. But construction hasn't yet started since the U.S. has been unable to raise enough money to confirm its attendance.

"We are quite a ways away from fulfilling that target," said Ellen Eliasoph, co-chair of the proposed U.S. pavilion at the Shanghai World Expo, speaking last month. She says the U.S. is bound by a 1993 law forbidding federal funding for such events, so her team needs to raise $61 million from corporate sponsors for their pavilion just as the world struggles with its worst recession in more than half a century.

Shanghai has set aside a two-square-mile plot of prime real estate for its World Expo. But the global financial turmoil is now causing headaches all around.

No country has pulled out of the expo yet, according to expo organizers, but press reports indicate that several are downsizing. Poland has cut 70 percent of its budget, while the head of the U.K. team, Janet Rogan, resigned earlier this year, reportedly over budgetary concerns.

Organizers also say they believe the U.S. will attend, but worries are mounting over a possible no-show. Zhu Yonglei is the deputy director general of the Expo coordination office.

International relations professor Zhu Fang from Shanghai's Fudan University says ordinary Chinese people would be likely to interpret any U.S. absence as a snub — or worse.

"I can imagine some people will say the U.S. is so broke it cannot afford to attend such an event, which means the whole world has really changed in terms of the power structure," Zhu Fang says. "It doesn't reflect well on the U.S., and it doesn't bode well for the U.S.-China relationship."

As if to symbolically prove China's place in the new power structure, the construction of the enormous Chinese pavilion, The Oriental Crown, which alone costs $200 million, is already well under way.

In its role as Expo host, Shanghai is offering a $100 million fund to help developing countries, but the U.S. isn't eligible. The U.S. has failed to attend World Expos in the past due to funding difficulties, including the 2000 Expo in Hanover, Germany, and last year in Zaragoza, Spain. At the 2005 World Expo in Aichi, Japan, the U.S. pavilion was partly funded by Toyota Motor Corp. This time, rumors are flying about possible Chinese help for the U.S. pavilion.

Eliasoph, the U.S. pavilion co-chair, says what's on the table is an interest-free loan from the Chinese organizers, which would allow construction of the U.S. pavilion to begin on schedule. The U.S. would then pay it back after securing corporate funding. It's not a bailout, she stresses, rather a sign of China's commitment to the U.S. pavilion. Others don't like the idea.

"As an American, I find that embarrassing," says Cynthia Barbera, a businesswoman living in Shanghai. "No, that's not acceptable to me."

She says she wants to support the U.S. effort in any way she can, but feels a rethink is necessary.

"I do believe Americans living here feel frustrated. They want to be included in the process at all levels," Barbera says. "I think we need to embrace a new creative approach, one that's more green and one that's more lean. I think this needs to reflect the times we live in and the spirit of the Obama administration."

Barbera was one of a group of Americans in Shanghai who earlier in the year drew up rough plans for a cheaper pavilion, at a time when the official bid seemed to have petered to a halt. She argues that, given the fact that the pavilions are designed to be torn down at the end of the Expo, it would be more sustainable to have a cheaper, more environmentally sound structure, which she describes as a "building more like a tent."

Producer Ralph Miller, who designed the Coca Cola pavilion for the Olympics, says the Expo Team could benefit from further communication with American expats and businesses in Shanghai.

"I think there are opportunities for cost-cutting. My experience in building similar-sized pavilions here for the Olympics would indicate there are potential savings if we could bring everyone together and they can look at it in a fine-tooth way," he says.

So far, just one sponsor — 3M — has signed up, but Eliasoph says final negotiations are now under way for the first $5 million sponsor. She describes the mood as more positive in recent weeks, with the Obama administration offering more support.

But the lack of cash is such that the U.S. pavilion team actually had to suspend operations for a while late last year, and the whole team is working pro bono. Eliasoph describes the stresses.

"If I were to ask myself everyday why am I continuing to pursue this, I'd get very bollixed up, so I'm just pursuing every lead, every contact to find a way to make this happen," she says.

With 400 days to go, a special ceremony was held Friday at Expo headquarters to unveil the design of the Expo ticket. Against the ticking clock, the U.S. team has pushed back the deadline to confirm its attendance to May 15.

The proposed pavilion's theme is "Together, we're rising to the challenge." Given the economic climate, those challenges are far larger than anyone imagined a year ago.