Accessibility links
Past 60, Mick Fleetwood Plays On Drummer Mick Fleetwood explores the resurgence of blues in America, thanks to an ongoing interest in British blues-rock bands like The Rolling Stones and Fleetwood Mac — which is touring again after a five-year hiatus. Fleetwood says he hopes to bring the group back to its blues roots. 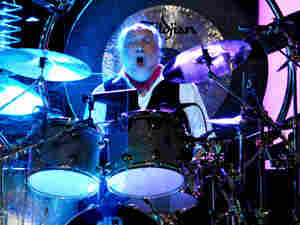 It's been more than 40 years since guitarist Peter Green founded Fleetwood Mac, and although he no longer plays with the band, it remains active. The group still includes drummer Mick Fleetwood, who, at 61, is bringing his music back to its blues roots.

After a five-year hiatus, Fleetwood is playing again with longtime bandmates Stevie Nicks, Lindsey Buckingham and John McVie on the Unleashed tour, while at the same time touring with his own outfit, Mick Fleetwood's Blues Band.

As a tribute to his blues-based roots, Fleetwood created Mick Fleetwood's Blues Band with guitarist Rick Vito. Vito, a fan of Fleetwood Mac when the group formed in 1967, had a stint as its guitarist in the late 1980s. Fleetwood's experience playing the blues with acts such as John Mayall & The Bluesbreakers placed him in the history of blues alongside the likes of Eric Clapton and Mick Taylor from The Rolling Stones.

"There was a whole blues movement in Europe," he says.

It was a movement which helped send Peter Green's Fleetwood Mac, the band's first album, to the top of the English charts. Back then, the average English listener thought he was playing a brand-new musical form.

Blue Again, Fleetwood's first album with his new band, strives to bring back the music that sparked the movement. It's a hybrid album, composed of old songs (written by Green from the first incarnation of Fleetwood Mac) and new material by Rick Vito. One of the album's "vintage" songs is Green's "Love That Burns." Fleetwood says he remembers playing that song long before it was recorded on an album.

"We played this in a pub called The Nag's Head in Brixton," Fleetwood says. "It could maybe get 60 people in it, and there used to be 250, 300 people in there. And those were the sorts of places this music came out of. That was our beginnings of Fleetwood Mac."

Fleetwood says he believes strongly that the blues might not be alive today if English rockers hadn't discovered it. Bands such as The Rolling Stones took it upon themselves to teach their American fans about their own heroes, including Muddy Waters, Walter "Shakey" Horton and Bo Diddley.

"That whole genre of music was all but dead," he says. "All of these guys used to come over to Europe and would be treated like royalty. That art form is part of a wonderful heritage of the United States of America. It's nice to know, in some way, that we were a part of that."

Fleetwood has recently taken to the world of Twitter, where he answers questions from fans. Addressing the ups and downs of his band, he admits that, although it's been somewhat dysfunctional at times, the current tour is evidence that Fleetwood Mac is here to stay.

"The lovely thing is, we're very aware that we love to make music together," Fleetwood says. "It hearkens to the Shakespearean phrase, 'If music be the food of love, play on.' And we are playing on."