Accessibility links
A Visit With The Birdmen Of Beijing Every morning the Chinese city's Coal Hill Park is atwitter with retirees and their avian companions. They're continuing a tradition that flourished among the Manchu nobles of imperial China — even though, as one man says, "the old ways are almost extinct." 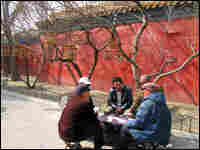 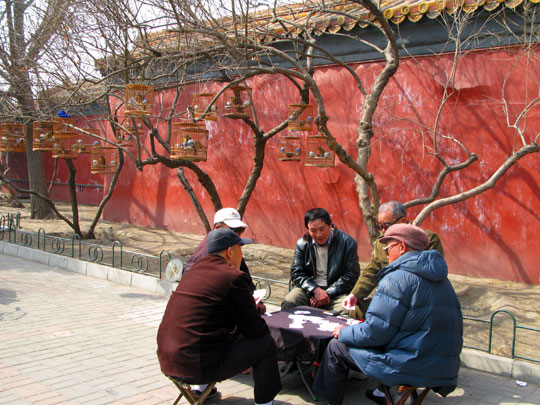 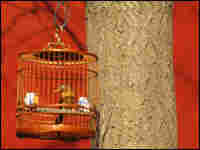 A song thrush in its cage. Wang Zemin for NPR hide caption 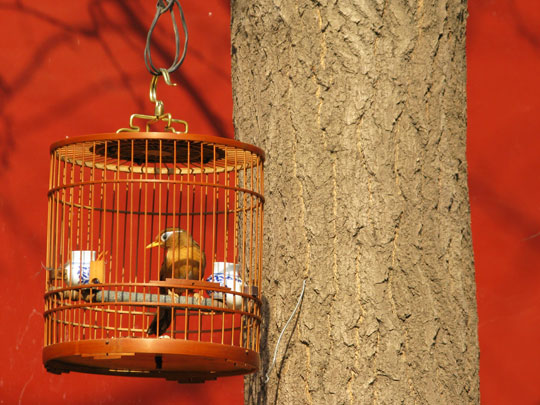 A song thrush in its cage. 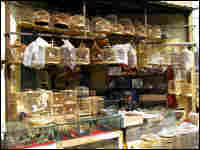 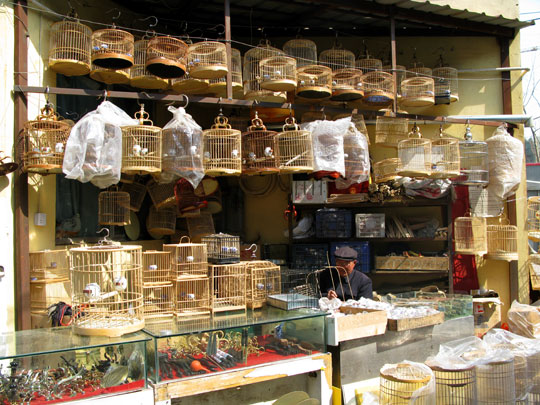 It wouldn't be a proper visit to a Beijing park without checking out the "birdmen." Every morning, the parks are atwitter with retirees and their avian companions. Up above, birds chirp in their cages, hanging from trees. Down below, their owners chatter and play cards. They sit on tiny stools and slap their cards down on the table.

Retired mechanic Wu Dazhao explains that people here tend to hang out with their own kind. And that depends on what kind of birds they raise.

"Those guys over there with the white cloths covering their cages, they're the titmouse guys," says Wu, pointing north. "We song thrush people are over here. And the guys with the larks are over there. The different groups leave each other alone. You could say that within this little group, we're all 'bird buddies.' "

Nearby, local resident Li Bingzhen's song thrush chirps in short but eloquent phrases. Li says both song thrushes and their owners tend to be more vocal and extroverted types.

"To put it simply, to take care of a bird is to take care of yourself," he says. "Walking your bird is also taking yourself for a stroll. It's like going to work, every morning at eight o'clock, rain or shine. The routine of raising a bird is just like that."

In imperial times, Manchu nobles idled away their days raising birds, crickets and goldfish and lavishing money on ornate cages and other paraphernalia.

But since the government banned trade in thrushes, skylarks and other endangered species a couple of years ago, you have to go to Beijing's suburbs, where the ban is laxly enforced, in order to buy the birds.

At the Hongyan market, for example, there are pets of every genus and phylum. Craftsmen make cages from bamboo, wood and metal. A woman pounds birdseed with a wooden mortar and pestle. Other bird snacks, in the form of little white grubs, wriggle in a bin. One birdman, who gave only his surname, Zhang, is looking to buy a skylark.

"This kind of bird must be taught to sing under a person's supervision," Zhang says, eyeing a skylark in a cage in front of him. "Each sound the bird makes must be correct, and none should be missing."

A lark's cage is immediately identifiable by the sand on its floor, mimicking the bird's habitat on the steppes of Inner Mongolia. While most cages have little porcelain bowls for food and water, the skylarks' water bowls are outside, to keep the water from muddying the sand. Most important, Zhang explains, there's a little table-like perch in the middle of the cage.

"A trained lark will get up on his pedestal and sing 13 different tunes, each in the proper order," Zhang says. "This was how old Beijing gentlemen did it. But quite frankly, the old ways are now almost extinct."

Zhang explains wistfully that the vendor here will not sell him this particular skylark until it lays some eggs. And only then, Zhang says, can he begin the two- or three-year-long process of training the lark, and gradually build a fine-feathered friendship.