Accessibility links
Electronic Medical Records A Charged Debate Many health care professionals agree the switch to electronic records will help lower health care, but there is growing skepticism among doctors, administrators and computer specialists who say the costs of implementing a comprehensive tracking system will outweigh any cost-saving benefits.

President Obama's economic stimulus plan includes $19 billion to help medical care facilities switch to electronic records. The president's rationale is that a streamlined and consolidated process of tracking patient care will lower administrative expenses, and by extension, the costs of health care overall.

Many health care professionals agree — but there is growing skepticism among doctors, administrators and computer specialists who say the costs of implementing a comprehensive tracking system will outweigh any cost-saving benefits. 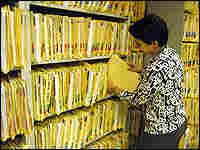 Pediatrician Cynthia Fishman is in the process of transitioning her practice's medical records from paper to digital. Joanne Silberner/NPR hide caption

A new study of hospitals published in the New England Journal of Medicine finds that only 1.5 percent are fully computerized, and only another 7.6 percent have some sort of basic electronic medical record system.

That's despite massive efforts by both the Obama and Bush administrations to bring American medicine to where many European countries are: computerized patient records that are accessible across the medical system.

You don't need to look any farther than pediatrician Cynthia Fishman's office in Rockville, Md., to find out why doctors are hesitating.

Her office looks like a lot of other pediatricians' offices in America.

There are toys scattered in the waiting room, cartoon pictures of sweet-faced lions and tigers on the walls, and floor-to-ceiling rows of paper charts in the chart room.

Fishman wants to replace those paper charts. The eight-doctor practice she's in already uses computers to schedule appointments and generate bills. But Fishman is worried.

"When I have a paper record, it's there," she says. "Paper has been around for a millennium. We know how to document. It's what we've been doing."

Despite these concerns, she and her partners have decided to take the plunge. "As of May," she says, "we will no longer have paper. If anything is on paper, it will go on computer. All the physicals, all our interactions with patients here in the office will now be documented on computer."

Fishman and her partners have bought a full electronic health records program from Children's National Medical Center, a large and sophisticated hospital in nearby Washington, D.C.

Children's sold them the software system for $6,600 per doctor, a big discount over the retail value of $20,000 per doctor. One reason they offered the discount was to ensure that Fishman's practice would keep sending patients to Children's. The shared system means that the doctors will be able to get immediate lab results and read consultants' comments on their patients.

"The route of most medical errors is miscommunication," says Dr. Brian Jacobs, the chief medical information officer at Children's. With electronic medical records, "We can do things better," he says.

For instance, a doctor's bad handwriting doesn't lead to a prescription error. The results of tests are readily available and easy to find. A child's full medical history is there when he or she gets to the emergency room.

Fishman hopes this new system will work, "even though I think it will be painful." She's worried about the computers breaking down, and the time it will take to learn the new system. But she is optimistic that the electronic system will "help make our patient care better."

As for the $19 billion Obama has put aside for heath information technology, most of it will go to doctors who have electronic records for their Medicare and Medicaid patients.

Fishman sees few if any of those patients. Insurers often follow the government's lead, but it's not clear yet if they will give bonuses as well. Still, Fishman believes it's time to go to electronic. "We've been looking at this a long time."