Accessibility links
Helen Levitt Captured Perfect Moments, Unnoticed The acclaimed street photographer died in her sleep over the weekend; she was 95. In 2001, NPR's Melissa Block interviewed Levitt — in what she describes as one of toughest she has ever conducted. 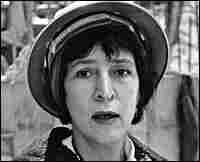 Helen Levitt, circa 1963, while producing the film An Affair of the Skin by Ben Maddow. Courtesy Estate of Helen Levitt hide caption 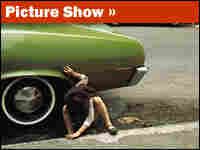 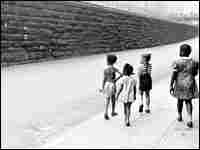 In 2001, when Melissa Block asked Helen Levitt about what she captured in one of her best-known images (above), Levitt said: "Just what you see ... If it were easy to talk about, I'd be a writer. Since I'm inarticulate, I express myself with images." Courtesy Estate of Helen Levitt hide caption

Listen to Melissa Block's interview with Helen Levitt that ran on All Things Considered on Jan. 17, 2002. 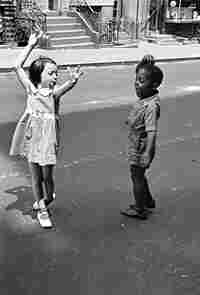 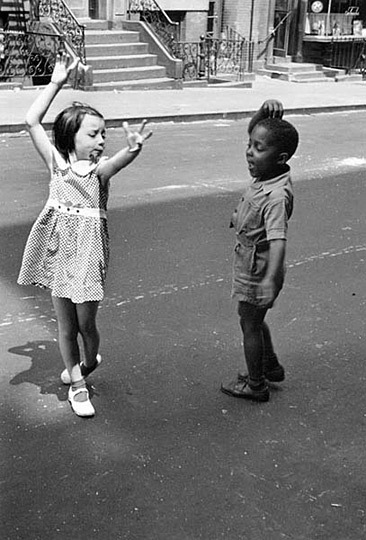 Helen Levitt found magic on the grimy streets of New York. Her photographs from the '30s and '40s capture the grit and vigor and humor of the city. And she kept on shooting for much of her life.

Helen Levitt died in her sleep over the weekend. She was 95.

Late in 2001, I visited her in her small, well-worn Greenwich Village apartment for a story about her life and career.

And it was probably one of the toughest interviews I've ever done. It quickly became clear she didn't much like talking about her work. I tried asking about one of her best-known images — a black and white picture of four young girls watching soap bubbles drift across the street. I asked her what she captured in that picture.

"Just what you see," Levitt said.

I asked her why it was hard to talk about her photography.

"If it were easy to talk about, I'd be a writer," she said. "Since I'm inarticulate, I express myself with images."

And I asked if she was happy with the picture when she looked at it, if it gave her pleasure.

Levitt was charming, though, in her own tough way, living with her yellow tabby cat, Binky, up four flights of stairs.

She told me, briefly, about meeting the photographer Henri Cartier-Bresson and learning from him that a picture didn't have to have social meaning — that it could "stand up by itself."

And she talked some about walking around the streets of New York and how she could capture those moments unnoticed.

"I had attached to my camera — I had a little device that fit on the Leica camera that they called a winkelsucher, which meant that you could look one way and take the picture the other," she said. "You could turn your camera sideways."

They were small, perfect moments that she found, though she would never tell you that.

In a photo from circa 1940, some street urchins in tattered clothes cluster on the sidewalk. They're holding the frame of a broken mirror, a boy on a bicycle framed exactly in that open space.

In one of my favorites, we see just the back and legs of a woman. She has dived up to her shoulders into her son's baby carriage, as he laughs in huge delight.

This was a time when life was lived on the streets, and that's where Levitt spent her time — especially in Spanish Harlem.

"It was a very good neighborhood for taking pictures in those days, because that was before television," she said. "There was a lot happening. And then the older people would sometimes be sitting out on the stoops because of the heat. They didn't have air conditioning in those days. It was, don't forget, in the late '30s. So those neighborhoods were very active."

When I was in her apartment, I saw boxes of prints stacked up. One was labeled simply "nothing good." Another one was marked "here and there."

"That's the beginning of another book," she said about the box.

Well, she must have decided they were worth something. That book, Here and There, came out a few years later.

About a year after my first visit, I went back to see Levitt one more time.

I was moving away from New York, and I wanted to bring a piece of the city with me. She let me look through some boxes of prints, and the one I bought from her that day hangs on my living room wall.

It shows two young children on the street, of course — not the sidewalk. They're in the middle of the street, and they're dancing. A white girl, in bright white shoes and a summer dress, her arms raised up — maybe she's about to twirl — turns toward a black boy, smaller, in shorts, with one arm curved joyfully over his head.

I'm sure they had no idea Levitt was there.