Accessibility links
The Mayhem of 'Pride, Prejudice And Zombies' Jane Austen is one of the most popular writers to rip off — or expand upon — of all time. Whether you've read the original Pride and Prejudice or not, commentator Madhulika Sikka says you've probably heard the storyline anyway.

The Mayhem of 'Pride, Prejudice And Zombies'

The Mayhem of 'Pride, Prejudice And Zombies' 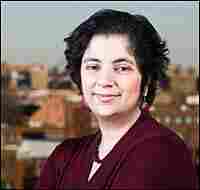 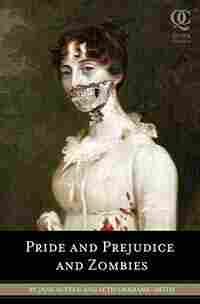 Pride and Prejudice and Zombies is just one of the many offshoots of Jane Austen's classic. Courtesy of Amazon.com hide caption

It is a truth universally acknowledged that a writer in want of a publishing contract is well advised to rip off — excuse me — expand upon anything written by Jane Austen.

The latest book to join the ranks of the Austen embellishers, published April 1, is titled Pride and Prejudice and Zombies by Jane Austen and Seth Grahame-Smith, and it's not an April Fools' joke. At least Mr. Grahame-Smith shares his byline with Ms. Austen and, indeed, claims that his book is 85 percent Jane and just 15 percent Seth.

And let's face it — who wouldn't want to read a version of Austen's most beloved book that includes "ultraviolet zombie mayhem," where we discover that the lovely Miss Elizabeth Bennet isn't only a woman of discerning taste, steadfast values and integrity, she can also take on three zombies at once.

She encounters them on her famous walk to the Netherfield estate, where her sister Jane recuperates from a chill induced by her own hearty journey to the home of her would-be suitor, Mr. Bingley. Fortunately, Jane manages to dodge the zombies, suffering merely "a few bruises and a minor stab wound". Elizabeth slayed all three of the zombies in her path, including beheading one of them! Elizabeth Bennett has been one of my literary heroines since I was a pre-teen, now I really know why!

Yes, the zombie version of Pride and Prejudice suffers from a want of seriousness. But really, why not? Before all of you Austenite purists revolt at the revolting notion of such a version, it is worth pondering the bigger question: Why does this Jane Austen industry endure?

Here we are, almost two centuries after she first put pen to paper, and people are inspired to carry on her storytelling. There are dozens of prequels, sequels and contemporaneous missives that derive from the six full-length novels she penned. There is even a mystery series that imagines Austen herself as a sleuth. Let's not forget the self-help industry. There's Jane Austen's Guide to Dating, Jane Austen's Guide to Good Manners, The Jane Austen Handbook and Dear Jane Austen: A Heroine's Guide to Life and Love.

Why do we want more? Her characters endure the test of time because she deals with universal themes of love, longing, social interactions, family drama and filial responsibility. There is something for everyone in a Jane Austen novel.

And even if we don't think there could possibly be much that readers of today would recognize in Ms. Austen's chronicles of Regency England, there is. We've all wanted to be the matchmaker for our friends, just like Emma Woodhouse. We've all known someone who has waited for years for Mr. Right, just like Persuasion's Anne Elliot, and we love her happy ending. And Elizabeth Bennet, well, there is so much to love about her: her spunk, her wit, her intelligence and her sparring with Mr. Darcy, of course. Who hasn't encountered a woman as bitchy as Caroline Bingley, or a suitor as oafish as Mr. Collins? Not to mention meddling mothers (Mrs. Bennet); dowager dragons (Lady Catherine de Bourgh); or wicked, wily cads like Mr. Wickham?

But just like Jane Austen's books themselves, there's something for everyone in the Jane Austen rip-off industry. So, if zombies are not your cup of tea, don't despair. If you want to know how Mr. and Mrs. Darcy would have solved mysteries, you can try Carrie Bebris' series — books like Suspense and Sensibility or North by Northanger, where her homage includes these puns on the author's original titles.

Ever wonder how passionate those Bennet sisters really got once marriage was finally achieved? Then you can try the Regency romps of Linda Berdoli, where the sex life of Mr. and Mrs. Darcy is not left completely to the imagination. Contemporary chick lit abounds with Pride and Prejudice-inspired works — from Bridget Jones's Diary (where her love interest really is named Darcy), to Alexandra Potter's Me and Mr. Darcy, where her fictional heroine, Emily Albright, meets the real Mr. Darcy while on a tour of Jane Austen's England.

So even if you think you'd never get into Jane, Jane is everywhere; there is no escape, and I, for one, am delighted. Every rip-off opens the door to one more person who just might be curious enough to venture back to the source.

Madhulika Sikka is the executive producer for NPR's Morning Edition.