Accessibility links
Sudanese Basketball Dynasty Scouts Fresh Talent Duany Duany and his younger brother both went from Southern Sudan to the NCAA men's basketball Final Four. And every time March Madness rolls around, Duany bets on his hometown of Juba and the potential basketball stars he finds there. 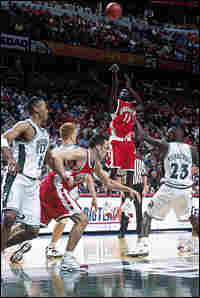 Duany Duany helped take the University of Wisconsin Badgers to the NCAA Final Four in 2000. Now, he helps bring talented kids from his hometown of Juba in Southern Sudan to the United States to play basketball. Jonathan Daniel/Getty Images hide caption 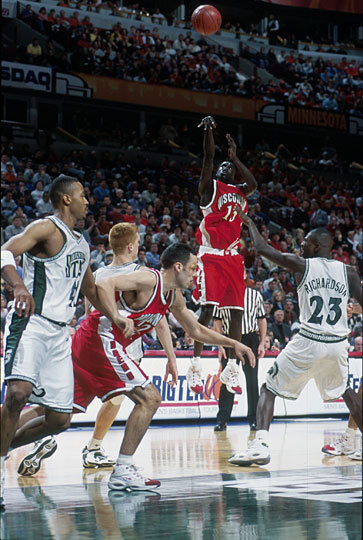 Duany Duany helped take the University of Wisconsin Badgers to the NCAA Final Four in 2000. Now, he helps bring talented kids from his hometown of Juba in Southern Sudan to the United States to play basketball.

Every March, when it comes time to predict the NCAA Championship team, it behooves a fan to place at least one loyalty bet on the hometown boys and girls. In college ball, heart can go the distance.

Duany Duany knows. He helped take the University of Wisconsin to the Final Four in 2000 before playing professionally in Europe and the Philippines. But during this and every March Madness, Duany bets on Juba — never mind that the town has only one basketball court.

"When I was playing at Wisconsin, the one thing I used to say to the coaches and my teammates is, 'Yeah, I'm lucky and I'm blessed, but there are a lot more kids in Southern Sudan who [have] way more talent, but they just never had the opportunity,' " Duany says.

Let the record show that Juba has already gone all the way. The Duanys of Juba are the only family to have had four children playing in the NCAA at the same time: four kids, four scholarships to four top schools — Wisconsin, Bradley, Syracuse and Georgetown.

Duany Duany's little brother Kueth was captain of the Syracuse team that won the championship in 2003 — their mother has the Sports Illustrated to prove it. Because of a long civil war in Sudan, the Duany kids grew up in Bloomington, Ind.

"If you grow up in the U.S., everybody knows the state of Indiana basically as the basketball state," Duany Duany says. "In every backyard, you have a basketball court. In the summertime, we'd be there from 9 a.m. until one o'clock in the morning. And we got good because we played so much."

And they kept growing. Duany's little brother — the Syracuse Orangeman — is 6 feet 6 1/2 inches. Their baby brother, a former Eastern Illinois Panther, is 6 feet 7 1/2.

But while the Duany brothers are remarkable in the U.S. for their height, they seem to be just average in Juba, where the women stand above 6 feet and a 6-foot-5-inch man can have a Napoleon complex. Just ask Duany how tall he is.

Height: You Can't Teach It

Now that the war is over, the Duany kids have come to recruit in their homeland. They are looking for young Southern Sudanese to play ball for prep school scholarships in the United States. Prep school can lead to a Division I college, which can then lead to the NBA. And who better to try than the kids from around here?

"That's something you can't teach," Duany says. "When I find them, I say, 'Hey do you play basketball?' And they don't even know what basketball is. I just tell them, all you have to do is catch the ball and dunk it. Get down there and get a rebound."

Some of their high school recruits are already playing college bastketball, including Mac Koshwal at DePaul University. Steven Yien just graduated from the University of South Carolina, where he was a Gamecock. Tang Okol will play next year at Oklahoma State, and John Riek will play for the University of Cincinnati.

Riek is 7 feet 2 inches with a wingspan of a man 7 feet 8. Maybe, if he eats his Wheaties, he can grow up to be an NBA star like his fellow countryman Manute Bol. There has never been any player taller than Bol. But Duany says that for most recruits, college ball will have to be enough.

"Enjoy your moment, right there. It's going to go by fast. And if you are lucky enough to play in the NCAA and play at a great institution and go to the tournaments and get the chance that we got and especially to get a ring. We were actually lucky and blessed to do that. "

And yet, the Duanys still can't shake the vapors of competition from their blood. Duany's younger sister, Nora, was a Georgetown Hoya. She is currently Miss Southern Sudan and plans to compete in the Miss Universe pageant. And don't get Duany talking about losing to Michigan State in 2000. It's as if it happened yesterday. But he did get that ring out of it.

The ring is platinum with diamonds. "My brother's is probably nicer, because he's got the championship ring. Mine is the Final Four," he says, laughing.

In the Duany family, every day is March Madness.