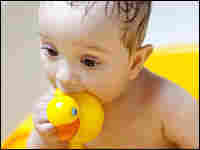 Children would have to mouth toys containing the phthalate DINP for at least 75 minutes a day to have even the slightest risk of health problems, a Consumer Product Safety Commission panel concluded after analyzing data about chewing and saliva. iStockphoto.com hide caption

A new federal ban on chemical compounds used in rubber duckies and other toys isn't necessary, say the government scientists who studied the problem.

The ban, which took effect in February, prohibits making or selling duckies and other children's products that contain chemicals called phthalates, which are used to make plastic soft. Congress passed the ban in 2008 after concluding that the chemicals posed a risk to children who chew on their toys.

The action came despite advice not to enact the ban from scientists at the Consumer Product Safety Commission, which regulates toys.

The commission opposed the ban because "there was not a risk of injury to children," says Dr. Marilyn Wind, deputy associate executive director for health sciences at CPSC.

It reached that conclusion after studying phthalates in toys for more than 25 years and acting several times to make sure children were not exposed to even a slight risk from products that contain the chemicals.

Putting The Study Where The Mouth Is

Wind says that from the beginning, CPSC scientists have focused on products that end up in a child's mouth, including rattles, squeeze toys, teethers and pacifiers. "That's the most exposure," she says, because mouthing and saliva can release phthalates from plastic products.

Back in the 1980s, soft toys made from PVC plastic contained a type of phthalate called DEHP, which has been shown to cause cancer in rodents exposed to high doses.

The commission was concerned enough about DEHP to begin action that would limit kids' exposure to it. Before that happened, though, companies offered to voluntarily remove DEHP from pacifiers, teethers and rattles.

That solved one problem but created another.

Instead of using DEHP, companies began softening toys with a phthalate called DINP, which appeared less likely to cause problems in rats and mice.

Then in the late 1990s, Wind says, scientists found evidence that DINP could cause liver problems in rodents.

"We met with industry and made them aware of what we found, and they voluntarily removed DINP from toys that could be mouthed," Wind says.

The commission also convened an expert panel to study DINP. And it began two experiments to figure out how much DINP kids could get from toys they put in their mouths.

The first experiment used volunteers from the commission's staff.

"We gave them DINP-containing piece of PVC to chew on and they then had to spit out their saliva," she says. Scientists measured how much DINP was in the saliva.

The approach was designed to extract more DINP than an infant possibly could from a toy, Wind says.

Do Kids Chew Toys Enough To Be At Risk?

The second experiment, done in 2000 and 2001, sent trained observers into homes and day-care centers. They studied 169 children to find out what they really did with their toys. The experiment did not include pacifiers or teethers, which by that time contained no DINP.

Wind says each observer carried a stopwatch and "every time a child put something in their mouth they recorded it."

Before this study was finished, the CPSC panel concluded, based on the data about chewing and saliva, that children would have to mouth toys containing DINP for at least 75 minutes a day to have even the slightest risk of health problems.

The mouthing experiment showed that even young children kept toys in their mouths less than two minutes a day.

So by 2003, the science was pretty clear, Wind says. "We could not ban DINP because there was not a risk of injury to children."

In testimony before Congress, Wind summarized the research her agency had done on phthalates in children's products and argued against the proposed ban.

An Abundance Of Caution

Scientists from the FDA explained why they, too, had concluded that the ban was not necessary to protect the public.

But lawmakers had other ideas.

Sen. Dianne Feinstein (D-CA) said the ban was needed because phthalates had been "linked to serious reproductive defects."

And during hearings, the lawmakers heard from scientists representing groups that want the government to ban all PVC plastics from children's products.

But Wind says she stands by the studies done by government researchers.

"I know that we did really good science," she says. "And sometimes people don't listen to the good science."