Accessibility links
On TV, Immigrants' Kids Mine Cultural Convergence As part of a new NPR series on the U.S.-born children of immigrant parents, Neda Ulaby talks to three actors of South Asian heritage — asking how inhabiting two worlds helps them shape the characters they play. 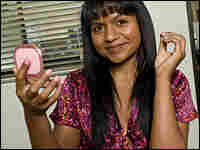 Pretty In Pink: Office star Mindy Kaling says starting from a dual cultural perspective can be an asset for a comedian. Mitchell Haaseth/NBC hide caption 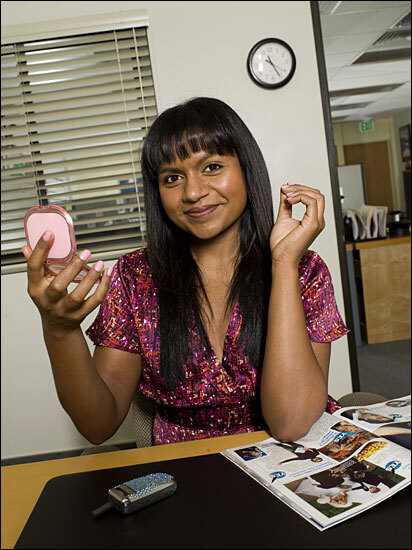 Pretty In Pink: Office star Mindy Kaling says starting from a dual cultural perspective can be an asset for a comedian. 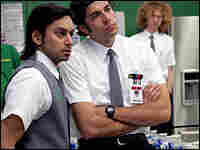 "With every role I'm doing ... I am reaching back into my history," says actor Vik Sahay (left, with Chuck star Zachary Levi), "and bringing little portions of it" to bear on his work. Adam Taylor/NBC hide caption 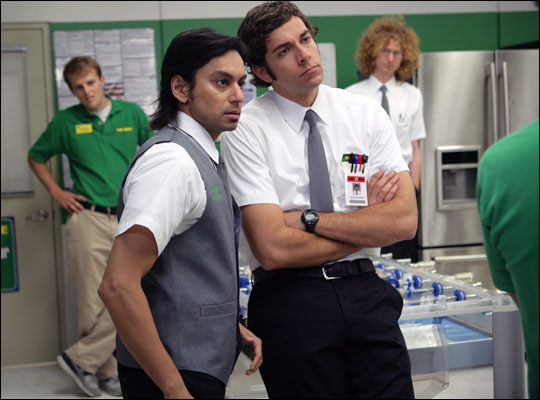 "With every role I'm doing ... I am reaching back into my history," says actor Vik Sahay (left, with Chuck star Zachary Levi), "and bringing little portions of it" to bear on his work.

But the history of South Asian actors on U.S. television stretches back to TV's Golden Age. Of course, over the years, there's been a fair amount of "brownface" — white actors playing South Asian characters. But what follows is a short list of actors of South Asian descent who've played recurring South Asian roles on U.S. network television. (Credit to the folks at the Saja Forum and TV Acres for getting us started. And please write in any we've missed!)

1950s — An Indian magician and mind reader known as Kuda Bux had his own CBS television show. He was known as the Man With The X-Ray Eyes.

1960s — Indian actor Sajid Khan played an orphan with a pet elephant in a short-lived NBC series called Maya, adapted from a marginally more successful film of the same name.

1980s — American audiences became acquainted with a number of talented British, Indian and Pakistani actors when the celebrated series The Jewel in the Crown aired on PBS. Later that decade, one of them, Art Malik, played a doctor on the ABC show Hothouse. Former tennis pro Vijay Amritraj played a Pakistani night school student in the Yakov Smirnoff vehicle What A Country! The Indian-born actor also appeared as a cop in the NBC show The Last Precinct. Half-South Asian actor Joher Coleman played a gifted Indian exchange student in ABC's Head of the Class.

1990s — Ajay Naidu played Al Franken's intern in a Broadcast News-like comedy Lateline that ran on NBC. Could that really be the only example for the whole decade?

2000s — British-born actor Ravi Kapoor did very well with shows whose title included the word "crossing." He played a forensic entomologist in Crossing Jordan, and a physician in Gideon's Crossing. Now he's in Numb3rs — one of the current shows listed on top. 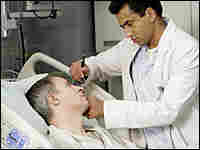 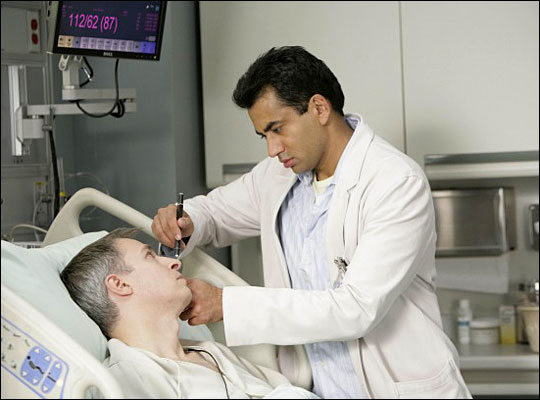 Kal Penn (right, with Jay Karnes) joined the Fox TV drama House in its fourth season, playing an ethnically Indian character who grew up as the adoptive child of Jewish parents.

More than a million people immigrate to the U.S. every year. Their children — born in the U.S., connected to two cultures — are the focus of a new series at NPR News. It's called "Immigrants' Children," and it's an occasional look at how they make their mark and the issues that confront them. We'll start by turning on the television.

Mindy Kaling is the daughter of Indian immigrants and a television triple threat: writer, producer and performer on the Emmy-award winning NBC comedy The Office. On the show's set, tucked away in a grimy Los Angeles neighborhood, she dashes out from the writer's room wearing snug blue jeans and a black V-neck sweater emblazoned with a skull.

That outfit would horrify her character, Kelly Kapoor, a ditzy customer service representative who favors pink things and sparkles. But Kaling is nothing like Kelly. Working insanely hard, she says, is part of her immigrant family's legacy. So is bringing bits of her own story to the screen.

"You know, I wrote an episode called 'Diwali,' " she observes, settling back in the green room. "Diwali is a Hindu holiday in October; it's like a festival of lights. It was kind of the perfect meeting of being the child of immigrants and writing for a comedy show."

Now the writers joke about having a Diwali episode every year — the Office version of an annual Christmas special.

"It's Diwali time again!" Kaling exclaims. "Nothing brings an office together like the season of Diwali!" She cracks herself up.

Kaling is one of a handful of children of immigrants from India who've managed to get a toehold in U.S. television. She's part of a small gang of Indian-American comedy writers who work on such shows as The Simpsons and My Name Is Earl.

Children of immigrants, she says, often feel like both insiders and outsiders in regard to American culture. In comedy writing, she says, that's an asset.

"The Office is observational comedy," she says. "Growing up and observing how your parents are not the same as other people's parents ... your perspective gets really sharpened."

When 'Everyone Is From Somewhere,' The Picture Changes

"Kalpen Modi is a cool name, but it felt too specific," he says. Brown-skinned actors get asked to play a range of nationalities, from Mexican to Arab to Pakistani; sometimes, they worry their names can box them in and cost them work.

These days, Penn plays an Indian-American doctor on the Fox TV hit House. Thanks to a 1965 change in immigration law, he points out, it would be completely unrealistic to set a show in a hospital without casting South Asians: Penn's parents were among thousands of medical professionals who emigrated after 1965, and he grew up in a New Jersey suburb where, he says, "everyone was from somewhere."

Penn says he doesn't really think of himself as a child of immigrants — even though aspects of that experience were meaningfully explored in his movies The Namesake and Harold And Kumar Go To White Castle.

Vik Sahay is an Indian-Canadian actor on the NBC show Chuck, where he plays a smug computer geek who works at a big-box store scarily like Best Buy. Sahay uses the fact that both he and his character are children of immigrants to shade and enrich his performance.

"So it feels that with every role I'm doing, whether it is East Indian descent or not, I am reaching back into my history, my own relationship with my parents, who they are," Sahay says. "My own ancestry, I guess, and bringing little portions of it."

For these children of immigrants, it turns out, acting is a little like what they've done their whole lives: balancing two identities, inhabiting two worlds and living convincingly in both.