Accessibility links
Commerce Secretary Sounds Off On Trade, Census Gary Locke, who was sworn in last week, tells NPR that the Obama administration will be consistent with Bush administration policies on the issue of unfair competition from a host of countries, including China. Locke also says he has been assured that the census director will report to him. 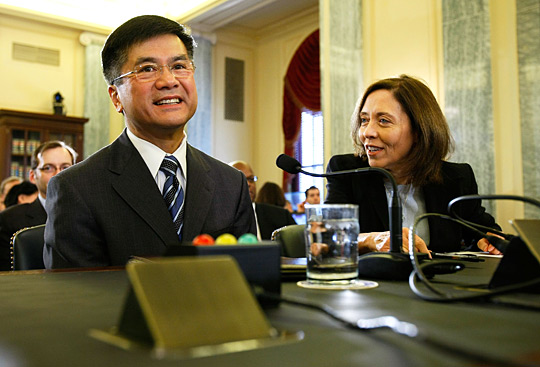 In his new role as commerce secretary, former Washington Gov. Gary Locke is charged with promoting American business and trade in the midst of a vicious, global downturn.

That means getting businesses to invest and take risks.

"Everyone knows that the auto companies have to engage in major restructuring," Locke says. "And if American taxpayers are going to be willing to help with the auto industry, they want to see real reform — not just in labor agreements, not just in contracts with suppliers — but also in the management structure of those companies that have led the auto dealers to this point in history."

Locke was the third person nominated by President Obama to lead the Commerce Department — behind New Mexico Gov. Bill Richardson and Sen. Judd Gregg, who both withdrew their nominations. Locke was sworn in last week.

During his confirmation hearings, Locke said he believes in "fair trade" more than free trade.

When asked whether the administration will take a tougher position on trade rules with China since manufacturers have complained about unfair competition, Locke says the unfair competition applies to "a whole host of countries."

He says the U.S. has been "fairly consistent over the last several years" about this point, including under President Bush. And he says that Chinese currency valuation is an issue that has been raised by former Treasury Secretary Henry Paulson and members of Congress.

Locke says he takes lessons from his days presiding as governor of a state that produces the most apples in America. "Our farmers have to abide by a whole host of environmental regulations, health and human safety standards, labor standards," he says.

"But apples coming from other countries, grown in other countries, aren't subject to the same type of rules and regulations," he adds. "That puts our Washington growers at a competitive disadvantage. The same thing with some manufactured goods made in America, where there are different subsidies by other governments — whether in Europe or elsewhere — that then put our American companies and American workers at a competitive disadvantage."

One way to leverage influence is for America to push harder on human rights progress in exchange for some of these trade links.

"I think that some of those issues are very legitimate issues to be addressed by the State Department, by Treasury and by Commerce," Locke says. "America has various ideals that we subscribe to, and we need to move other countries to begin adopting some of these."

In his new role, Locke is responsible for roughly 40,000 employees and oversees everything from the U.S. Census to National Weather Service forecasts. One of the reasons Sen. Gregg withdrew his nomination was concern over whether the Commerce Department or the White House would run the census.

The results of the census' population and poverty counts have become politicized over the years. Minority communities say they have been chronically and historically undercounted, which affects their representation in Congress and their eligibility for federal funding for all sorts of federal programs. Republicans say that changes to the current system would result in overcounting.

Locke says he has been repeatedly assured by Obama and other White House officials that the census director would report to him.

"But of course, as in past administrations both Republican and Democrat, there has always been consultation, communication between the Census Bureau and Commerce and the White House — as well as members of Congress," Locke says. "Commerce wants to know how it's coming along — as does the White House."