Accessibility links
New EPA Review Prompts Anxiety Over Mining Jobs The Environmental Protection Agency's stepped up scrutiny of coal permits has people in Appalachia worried bout the economic consequences. At issue is a mining process where the tops of mountains are blown off to reveal coal — with the resulting debris dumped in streams. 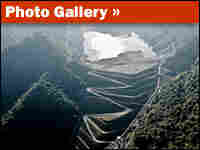 A federal judge in West Virginia issued a ruling Tuesday that dealt another blow to the controversial mining practice known as mountaintop removal.

The process involves blasting away the tops of mountains to expose coal seams underneath. The resulting tons of rock and dirt are typically dumped into valleys and streams.

U.S. District Judge Joseph R. Goodwin in Charleston blocked the U.S. Army Corps of Engineers from issuing so-called "nationwide" permits, which streamline the process of getting permission to mine. Goodwin also ruled that more detailed plans for each individual mine must be submitted before permits are approved.

The court's decision comes as the Obama administration is promising change in federal policy on mountaintop removal mining. That has coalfield residents gearing up for a fight.

Environmentalists, miners and industry officials are all trying to figure out what the administration's promised change will mean.

Last week, the Environmental Protection Agency issued letters raising "serious concerns" about two proposed permits for mountaintop removal mines in Kentucky and West Virginia. This sort of questioning was unheard of during the Bush administration, according to both supporters and opponents of the practice.

A Question Of Clean Water

Water is at the heart of a recent EPA challenge of the two proposed mining permits.

One of the proposed sites is just a few miles from Blair, W.Va. In the 1920s, the area was the site of the Battle of Blair Mountain, when thousands of armed coal workers seeking to unionize clashed with Logan County law enforcement.

Blair Mountain was recently named to the National Register of Historic Places. But that may not save it from future surface mining.

Dozens of families used to live in Blair. Now, just a few are left. The coal company has bought most of them out.

Disabled coal miner Alex Tomblin has remained. He blames the mines for poisoning his well. Recently, he drove to one of the area's few remaining natural springs to collect drinking water.

"This water is perfect water," he said. "It takes approximately three years to filter down through the soil to come out right here."

Tomblin dipped his cup into the small pool of water.

At the bottom of the clear pool, a yellow salamander scurried under a rock. A crawdad as big as a man's thumb backed away, looking a lot like a mini-lobster.

Another mountaintop removal mine is expanding into this area, and when it does, Tomblin expects the water here to go bad, too.

'No Practice As Environmentally Destructive'

Environmentalists are using the water issue to attack the entire practice of mountaintop removal mining.

Joe Lovett, director of the Appalachian Center for the Economy and the Environment, has been fighting mountaintop removal in the courts for more than a decade.

He says the practice violates the federal Clean Water Act because it unleashes a slew of pollutants, such as aluminum and selenium. Such mining has also buried hundreds of streams altogether.

"We're losing, forever, hundreds, now more that 2,000 miles of mountain streams in our region," Lovett said. "There is no practice in this country as environmentally destructive as large-scale surface mining."

With the EPA's letters questioning the proposed permits in West Virginia, Lovett sees a real shift in federal policy. "These letters are not the end of mountaintop removal mining. We're hoping they're the first step," he said.

That's probably the only thing that Lovett and Steve Walker agree on.

Walker runs Walker Machinery, which sells and services mine equipment. He employs about 800 people. Hanging on the wall of the shop is a photo of President Bush when he visited Walker's business in 2002.

Walker said coal production is already down because of the recession. Now the industry is under intensified scrutiny from the Obama administration.

He said the Army Corps of Engineers and the U.S. Fourth Circuit Court of Appeals have allowed mountaintop removal for years.

"The EPA, they've only been there for, gee, six weeks? And all of a sudden, they've already become smarter than everybody else," Walker said.

"So you've got to suspect that somebody up there is wanting to do away with coal," he said.

The EPA denies that charge, and even said it anticipates the bulk of the permits will be approved. But in an interview with the Louisville Courier-Journal last week, President Obama himself called the environmental consequences of mine runoff "horrendous."

'Scared To Death' About Coal's Future

It's that kind of talk that worries surface miners like Roger Horton. He earns $74,000 a year — a small fortune for Logan County — and he's started a group called Citizens for Coal.

"Everyone is scared absolutely to death," he said. "It's been nothing but absolute turmoil. I still don't know, understand what they're doing."

From the front porch of his new, three-story house, he can see the interstate highway. It was built with the same methods as a mountaintop removal mine, he said.

Opponents of mountaintop removal say curbing the practice would actually create more jobs for underground miners. It's a theory that may get tested in the near future.