Accessibility links
The Music Of Death, Alive Again Music critic Milo Miles reviews ... For the Whole World to See, an album of previously unreleased material from the proto-punk band Death.

Music critic Milo Miles reviews ... For the Whole World to See, an album of previously unreleased material from the proto-punk band Death.

By now, music fans are used to the regular discovery of vintage unreleased recordings. Nearly all of the good material is by already celebrated performers. But once in a great while, unknown players from the past make an impact on the present. Critic Milo Miles talks about once such release from the proto-punk trio Death.

(Soundbite of song, "Keep on Knocking")

Mr. MILO MILES (Music Critic): In a pop market where you've got to pick up every niche, there's a relentless parade of long lost masterpieces and forgotten gems. It can be psychedelic, rockabilly, soul, punk or whatever. More and more these are sad disappointments, or at best, trifles for zealous fans of a style who feast on crumbs. Quite a jolt then that the Detroit trio Death has come up with a brief album, "For The Whole World To See," that's the most surprising and satisfying proto-punk discovery since the Monks' "Black Monk Time," back in 1994. After all, the Monks have been a persistent rumor since the 1960's, with pictures of their tonsured heads turning up on occasion. Death are no more than a 1976 single, heard by almost no one. Back then, neither the market nor the audience were ready for the three black Hackney brothers: guitarist David, bassist and singer Bobby and drummer Dennis who are wrapped up in rock and roll.

MILES: Why is Death such an anomaly? "For The Whole World To See" consists of a single, plus five recently discovered 1974 demos. And most of the tracks evoke the hard charging racket of the Stooges and the MC5, who are as much a part of the Detroit scene as Motown. Besides, 20 years before Death, in the era of Chuck Berry, Elvis Presley and Little Richard, rock and roll was too black, no matter who was performing it. After the British invasion however, the image of a rock band changed to unconventional white guys with charming accents. By the end of the '60s, Jimi Hendrix was the only major black performer in rock. And even he caught criticism for not embracing racial revolution.

(Soundbite of song, "You're a Prisoner")

MILES: Black rock and roll never really went away. There were heavy doses of it in the band Funkadelic and there was the occasional offbeat group like Mother's Finest from Atlanta. It's clear that songwriters Bobby and David Hackney loved the very nature of high energy rock. It was punchy, plain, said what it thought - punky in other words. And though punk now has a connotation of downbeat fury, that was not always so. Like the Ramones, Death were more jokey than angry. Death's big experimental number, "Let The World Turn," even promotes cosmic patience and offers a reminder that early on, party punks could also speak arty punks. (Soundbite of song, "Let The World Turn")

MILES: Even in Detroit, Death never got much radio exposure and the Hackney's never connected with the right music industry people. The brothers went on to play gospel and eventually reggae. David Hackney died in 2000, more convinced than anyone else that Death would get its due. "For The Whole World To See" proves he was right. As rich and provocative as the '70s punk explosion was, it would have been more so, if Death had taken part.

GROSS: Milo Miles lives in Boston. He reviewed Death's album "For The Whole World To See," on the Drag City Label. You can download podcasts of our show on our Web site freshair.npr.org. I'm Terry Gross. 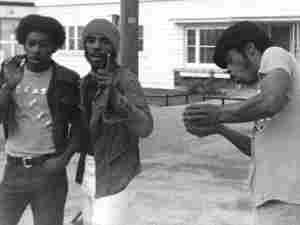 A mid-'70s power-trio from Detroit, Death sounds like a lost cousin of Thin Lizzy and the MC5 in "Keep on Knocking." Tammy Hackney hide caption

With its muddy-boots sound and evocations of both the MC5 and Thin Lizzy, Death's "Keep on Knocking" sounds like it was cut 34 years ago. In fact, it was. Just when it seems as if every long-forgotten band from rock's past has been resurrected by blogs and online traders, here's among the most obscure: a black power-trio from Detroit who recorded portions of an album in 1975, only to see it shelved over its label's reservations with the group's admittedly nihilistic name.

But there's nothing too grim about "Keep on Knocking," one of the standouts from For the Whole World to See, the Death album that's finally receiving an official, extremely belated release. From the opening power chords to bassist-singer Bobby Hackney's rushed, garbled vocal, the song has the harried, live-for-the-moment desperation that's always made for great punk (and great rock 'n' roll overall). We'll never know how the band would sound today — --itarist and leader David Hackney died nine years ago — --t for a moment, at least, Death lives.