Accessibility links
White Wine Stains Teeth, Too If you choose white wine over red in an effort to keep your smile bright, think again, says a new study. Even though white wine is largely colorless, the acid in all wines — and some other beverages — corrodes your tooth enamel and leaves the surface vulnerable to picking up stains. 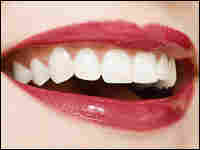 All wines — including whites — contain acids that etch your teeth, leaving them vulnerable to picking up stains. iStockphoto.com hide caption

Acidic beverages can cause tooth erosion, so scientists at the University of Iowa College of Dentistry decided to test five popular U.S. drinks. Using healthy, human permanent teeth (extracted) in the lab, they submerged each tooth in each beverage for 25 hours.

Here's what they found, from highest erosion to lowest:

The study doesn't account for the swishing of saliva, which can clear some acids. But the longer your teeth are in contact with the beverage, the greater the opportunity for erosion. The study was conducted by Leslie A. Ehlen et al. The results were published in Nutrition Research in 2008.

The culprit, which a lot of beverages share, is acid.

"The tart taste that we get out of the wine — that's actually an acidity," says Mark Wolff, a dentist at the New York University College of Dentistry.

Acid erodes the enamel on teeth, Wolff says, causing rough spots and grooves that leave them vulnerable to stains from colored food and drink. Red wine is worse than white because it has a lot of an intensely colored pigment called a chromogen.

"It's a very color-intense molecule," Wolff says. "It stays right on that tooth structure, turning the tooth bluish brown — like a blueberry would."

Many foods and beverages — like cherries, cola, coffee or tea — contain these pigments, but the stain doesn't always stick. Wolff and his team wondered why. So they experimented with a couple of handfuls of cow teeth, which are similar to human teeth, only a lot bigger and easier to work with — about 2 inches long by 1 inch wide.

The researchers took clean cow teeth and submerged them in three beverages: black tea, red wine and then white wine followed by black tea. They let them soak in each for an hour, which researchers say is similar to the effect of sipping wine or tea with dinner.

Red wine — no surprise — left a deep, dark stain on the teeth. Black tea did not. But the teeth dunked in white wine and then tea turned a "nice shade of brownish red," says Wolff.

Even though white wine alone doesn't have much color, the acids it contains were enough to rough up the tooth enamel and leave it exposed to the coloring from the black tea.

Red wine produced stains that were even darker, Wolff says, because it contains more pigment and more acid, which etch the tooth enamel and help the color to stick. Wolff and his team presented their research Wednesday at the International Association for Dental Research in Miami.

The acidic erosion isn't just a problem with wines, says Wolff. An abundance of citrus drinks like orange and grapefruit juice, lemonade, most sports and energy drinks and sodas also contains acids. And that's part of the problem.

People find these acidic drinks "refreshing," and it's probably not a coincidence, says Marcia Pelchat, a scientist at the Monell Chemical Senses Center in Philadelphia.

"Usually what people mean is they alleviate thirst or remove some unpleasant coating from the mouth," Pelchat says. "And beverages that are refreshing tend to be cold, acidic and carbonated."

To help head off stains, Wolff suggests using a toothpaste with a mild whitening agent. But don't brush too hard, and don't brush immediately after that wine or juice (when tooth enamel has been weakened), he says, or you could just make the problem worse.