Accessibility links
Chasing Drama, From Istanbul To Ephesus From Turkish baths to palatial museums, movie critic Bob Mondello scoured Istanbul and beyond in search of drama. He discovered that while lots of locales may look exotic in the movies, they're not always what they seem onscreen. 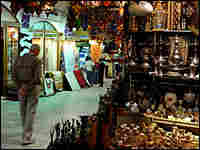 Istanbul's Grand Bazaar doesn't seem as exciting without a nude Jackie Chan punching his way through the stalls, as he does in The Accidental Spy. Jasper Juinen/Getty Images hide caption 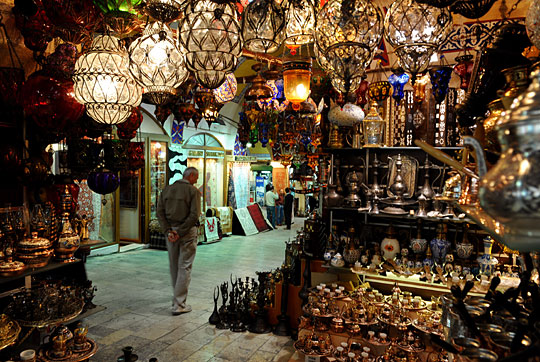 Istanbul's Grand Bazaar doesn't seem as exciting without a nude Jackie Chan punching his way through the stalls, as he does in The Accidental Spy.

From 'Midnight Express': Could I Have a Blanket?

From 'Topkapi': The Priceless Dagger 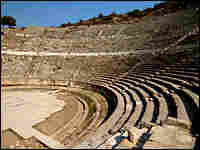 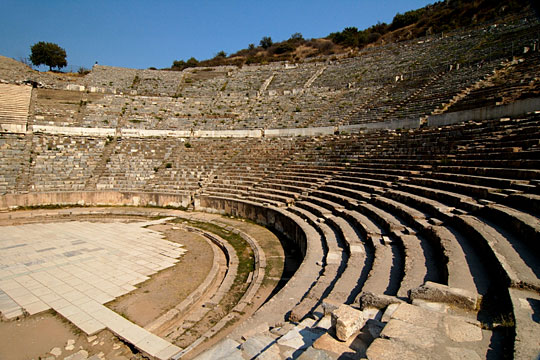 The Grand Theater of Ephesus seated audiences of 24,000.

Video: See It In Panorama

What I know of Istanbul, I learned at the cineplex. It's a city filled with intrigue, right? From James Bond's ferry ride up the Bosporus in From Russia With Love, to that terrifying Turkish prison in Midnight Express, to the Sultan's treasure room in Topkapi. If I'm going to Turkey, I figure that's the stuff I should see.

So I go hunting for it. Why, just a month ago, I was watching The International, with Clive Owens slinking through this waaaaay-spooky, super-secret underground reservoir. A mysterious, super-secret reservoir ... that it turns out I have to stand in line for now that I'm actually here.

And what do I find? Piped-in classical music. A gazillion tourists. No Clive Owens. But we knew that, right? The most surprising thing about the Basilica Cistern, as this tourist site is known outside suspense movies, is that the spooky movie-style lighting you see in The International was already there; Hollywood just had to turn on the cameras.

But that can't be true, surely, of that grim, disgusting prison from Midnight Express. According to three guidebooks and several local merchants, it was just two blocks from the cistern.

So I go searching and — hallelujah! — in what was once the prison yard, I find evidence: big rusting iron locks, suitable for shackling Brad Davis as he shouts that he's cold and needs a blanket.

Of course if he were cold and needed a blanket today, he could just ring for room service. Those big iron locks I found? Wall decorations in what is now the bar of a Four Seasons hotel.

The desk clerk says this former prison isn't even the right former prison, and that I wouldn't recognize it if it were. Turns out Oliver Stone shot Midnight Express in the island nation of Malta.

And so it goes with the movie-site sightseeing. The Topkapi Palace Museum's precious dagger, which Melina Mercouri describes in Topkapi as being "encrusted with diamonds and the four greatest emeralds the world has ever known?"

It would seem like a bigger deal if it weren't displayed among jewel-encrusted teapots.

The jewel, spice and-rug-crammed Grand Bazaar? Every bit as colorful as it was in The Accidental Spy, though not quite as active, without a naked Jackie Chan kicking up clouds of curry powder and swinging from the rafters in a Turkish bath.

So I pay it a visit to discover whether there's any drama in what people who don't swing from chandeliers do there.

An attendant lays it out for me: "For 10, 15 minutes, you sweat like the picture over there, the first one. They do the peeling, scrub the dead skin off you. Then you bathe. That whole procedure takes about a half-hour, but after that if you want to stay longer inside, enjoy the steam room, it's up to you."

Half an hour of steam — and the sweaty ministrations of an elderly gentleman who wants to bend me in directions I don't normally bend — is actually more than enough. And it helps me realize that I'm not finding much drama in all this screen-scene tourism. Probably won't find it at the Istanbul train station's Orient Express Restaurant, either.

Time to change my approach and put on my theater-critic hat. So I board a plane and fly over the battlefields bloodied by Mel Gibson in Gallipoli, and by Brad Pitt in Troy, to visit an older, noncinematic site of drama: the crumbling ruins of Ephesus, where Antony and Cleopatra — the real ones — saw the smash-hit comedies and tragedies of a couple of millennia ago, in the largest amphitheater in the ancient world.

Tour guide Ilker Eti takes us onto the stage and to demonstrate acoustics, claps his hands. Though we're out in the open air, the clapping echoes sharply, remarkably as if we're in an enclosed space. Sounds here have bounce and presence — theatricality, you might say. Clearly, the space would be good for the drama I've been chasing.

And for music, too, though amplified music, when played here in 1992, was responsible for an entryway's collapse. Today, the amphitheater still brings musicians in for concerts, but only classical music, without speakers.

The surrounding city of Ephesus, once a port but now several miles inland because its river silted up, was the second largest city in the Roman Empire, our guide says.

And how do archeologists, looking at bleached marble ruins, know that? Turns out the box-office gods told them. Only the nobility — the top 10 percent of Roman society — were allowed to attend the grand theater.

So size, in this case, actually matters. Ilker cites what he calls the Golden 10 rule: Take the seating capacity of a Roman city's theater, multiply it by 10, and you have the city's population. Ephesus' grand theater seated 24,000 — which means the city's population, in its first century AD heyday, was just under a quarter of a million people.

Accommodating so many Roman citizens required carving a huge, semicircular bowl into a hillside. The Romans expanded on an earlier Greek theater's foundations, building up from the broad stage — more than 60 curved rows of solid marble seating.

Steeply spaced rows, let's note, and to check out how those ancient acoustics hold up in the cheap seats, I head to the very top. It's quite a climb; I'm pretty out of breath before I'm even halfway. When I reach the top, the nearest person — some kids playing on the theater's stage — will be nearly a football field away, below me.

In theory, I'll be able to hear them anyway — over the noise of my heavy breathing? — because this vast open space, though stripped of most of its marble through the centuries, will do the work of projecting their voices for them.

And indeed I can: They're far more audible than you'd expect at so great a distance, even though they're speaking more or less normally. An actor declaiming lines would be clearly audible way up here.

They'd need to be, incidentally, to pull your attention away from the view, which is pretty breathtaking. Back in the day, that would have been a view of the far-off Aegean — which was a lot closer before the river delta silted up — with the huge ancient city of Ephesus spread out before it.

Today, above the ruins of that city's market, and the remains of a grand processional road, storm clouds scud across a grassy plain, providing a theater that's hosted audiences for more than two millennia with a simple, sensual brand of spectacle — an organic drama, ageless and elemental.