Accessibility links
Hidden Ingredient In New, Greener Battery: A Virus In the quest for a more environmentally friendly battery, MIT scientists have turned to biology. They've incorporated a genetically engineered virus into the structure of a lithium battery, allowing for a less toxic manufacturing process. 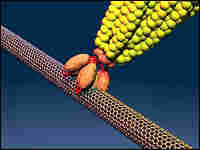 This model — which is well over a million times magnified — shows the virus (in red and yellow) binding with the carbon nanotube, creating a highly conductive network the charge flows through. Georg Fantner/MIT hide caption 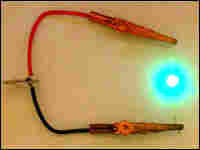 These new batteries have the same energy capacity as other lithium batteries of the same size and show potential to develop even more powerful batteries.

A few years ago, Belcher began working on batteries. She wanted to find a material for electrodes — the positive and negatives ends of the battery — that would have the right electrical properties and could be assembled by a biological system.

"We chose iron phosphate because lithium iron phosphate was already shown to be a good battery material," says Belcher. "And also because biology has done a fantastic job with those elements."

Iron and phosphate are already used by lots of biological systems. Red blood cells contain iron, and phosphate is an important ingredient in DNA.

Engineering Nature On A Nanoscale

To make an electrode, Belcher and her team needed to assemble the iron and phosphate molecules into a scaffold. The biological system Belcher chose to do this was a virus.

The viruses she used are long and skinny by nature. They attract iron and phosphate molecules along their length, which creates a stiff scaffolding. Belcher's viruses can also hold tight to carbon nanotubes, whose length is thousands of times smaller than a pencil dot. Attaching a carbon nanotube to one end of the electrode allows electricity to flow in and out of the battery. Belcher and her team published their work in the journal Science.

One advantage of using viruses is that if Belcher didn't like any properties of the electrode, she just tweaked the DNA of the virus that was making it. In a sense, she was evolving her virus, which was evolving her electrode, so she could select the one that worked best.

Once you put enough of these virus-electrodes together, you can create a kind of biobattery that can power an LED light.

"It's fun, and it's kind of cute, to power a green LED, but what about my laptop? What about my iPhone? What about my car?" says Belcher. "The power performance is there for us. Now it's a matter of scale."

Achieving that scale should be doable, researchers say.

Searching For A Leaner, Greener Power

"It would be a different manufacturing process, but I think that there's a very reasonable chance that the whole procedure would scale industrially," says David Wright, a chemist at Vanderbilt University in Nashville.

The new battery already has properties that put it on a par with batteries being manufactured commercially today, Wright says. The researchers are hopeful that later versions of the battery could be used to power hybrid cars.

And manufacturing this biobattery should take less energy and produce fewer pollutants, he adds. "This battery is made in water. It has no organic solvents in it, and the material is made in room temperature."

"We all know how important renewable energy is in developing more efficient alternative energy systems," he says. "And this is certainly one way that has a lot of promise."