Accessibility links
Ford Executive: Automaker Doesn't Need Bailout William Clay Ford Jr., executive chairman of Ford Motor Co., says the company, which has taken steps to restructure its debt, is well-positioned for the future. Ford, he says, has a new labor agreement, a new health care agreement and has made investments in green technology. 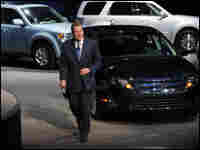 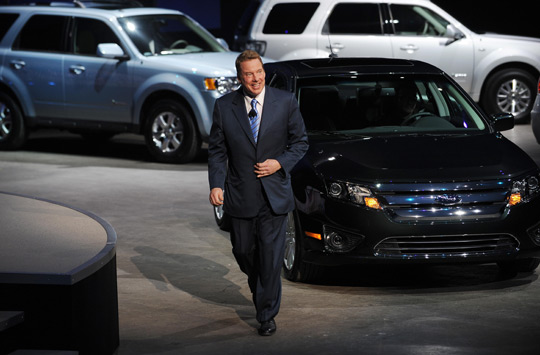 While General Motors and Chrysler may face structured bankruptcy, Ford has yet to ask for any government bailout funds.

William Clay Ford Jr., executive chairman of Ford Motor Co., says that car sales still are not where they need to be. Car sales for the Detroit Three — Chrysler, GM and Ford — are down more than 40 percent.

"The good news for Ford is that our market share has been going up and up each month," Ford tells host Melissa Block. He says what's really needed is "a program to stimulate sales for the entire industry."

Rep. Betty Sutton (D-OH) introduced the CARS Act in March as a way to modernize the U.S. auto fleet. The bill would provide consumers with a $3,000 to $5,000 incentive to trade in older cars to buy more fuel-efficient cars.

Ford says he is enthusiastic about the idea. "It clearly stimulates the economy, and it gets the consumer into the showroom and gets them buying again. But importantly — and this is what I particularly like about it — it really helps the environment quite a bit in two respects."

He says it takes an older, less fuel-efficient vehicle off the road and replaces it with a vehicle that is likely to have twice the fuel economy. And, he says, "the older cars tend to be much more polluting. And if you get them off the road and get a newer car with the newest technology, you're helping [reduce] C02 emissions, too."

Ford says similar programs are already working in Germany and France, and many other countries are interested in the idea.

If GM or Chrysler goes bankrupt, what impact will this have on Ford?

"It's the great unknown in terms of what the impact is on us because there are so many ways it could happen," Ford says.

"It could get very messy. Therefore, no matter what happens to any of our competitors, the fact that we have a new UAW [United Auto Workers] agreement, we have a new health care agreement, we've taken steps to restructure our debt, and we've invested very heavily in green technology — I think all of those things are exactly the kind of things that the country would like to see us do."

He says that if auto suppliers collapse, that could threaten not just Ford, GM and Chrysler but any car companies — including Toyota and Honda — that produce vehicles in the United States. And that's something the Obama administration is well aware of, he says.

If demand for vehicles doesn't improve, does that mean Ford may need to ask the government for a credit line?

"We think we have sufficient liquidity," Ford said. "We don't see any need to think about going for additional liquidity. Obviously at some point, if global auto sales don't pick up — not just for Ford but for frankly every other automaker out there — it's not going to be a good thing."

He says the outlook for 2009 isn't great, but the company remains well-positioned if there is a modest pickup in sales in 2010. Still, he says, "we're not projecting a huge boost in auto sales."

It's possible that when all the dust settles, there will no longer be three car companies in Detroit.

"I have no way of knowing how many car companies — American or foreign — there are going to be," Ford says." But what I do know is that Ford is going to be one of the key players."