Accessibility links
Calvin Borel's Body Reflects Wounds of Jockeying Calvin Borel has ridden thousands of Thoroughbred horses in competition. He is a small man whose hands are strong from years of work as a jockey, and knobby as if broken bones have knit back together reluctantly. 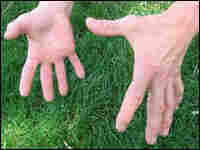 Calvin Borel has ridden thousands of Thoroughbred horses in competition. The small man's hands are strong from years of work as a jockey, and knobby as if broken bones had knit back together reluctantly.

When asked about the dangers of riding, Borel reaches down and raps a table.

Borel counts six broken ribs — some of which are now partly plastic. He has a plate and eight pins in one of his arms. He has shattered a kneecap, ruptured his spleen, torn a rotator cuff, and broken both collarbones, both shoulders, both legs, a wrist and almost all of his toes. ("You bang them on the starting gate," he explains.)

When asked about all this, he says simply, "I've had a few spills."

Borel's teeth are gone. They were broken in falls, slammed by horses and weakened by stomach acid from years of "heaving" or "flipping" to keep his weight down.

Borel said he's doing much better with his weight since his fiancée Lisa Funk, who he met at the track, has been encouraging lighter, more nutritional meals. Still, Borel deals with the repercussions. He recently broke a new $3,000 set of teeth in a fall.

Working a six-day week, Borel usually starts before sunrise and gets home after 8 p.m., with a break around lunchtime. The work, the riding, keeps him strong, he says.

"You've got to stay fit," Borel said. "You weigh 110 pounds and you've got to be helping the horse."