Accessibility links
RUN DMC Crashes Rock's Hall Of Fame, Again When it's inducted on Saturday, RUN DMC will not be the first rap group to make it into the Rock and Roll Hall of Fame — that was Grandmaster Flash and the Furious Five. But RUN DMC did achieve a number of historic firsts during its heyday in the 1980s.

On similarities between rock and rap fashion

On creating the first rap single with rock guitar, and its surprise popularity

On the role of the DJ, and what Jam Master Jay meant to RUN DMC 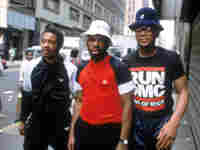 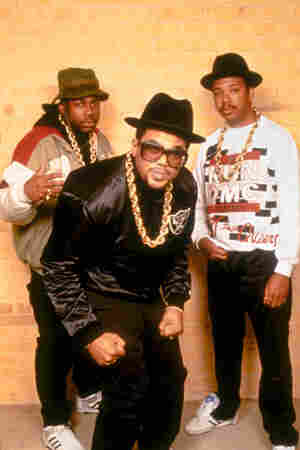 RUN DMC will be inducted into the Rock and Roll Hall of Fame on Saturday. Fotex Shooting Star/Sony Legacy hide caption

In 1984, MTV began playing a video that poked fun at the idea of rock's lead status in the music world. It showed RUN DMC — two rappers and a DJ trespassing at an imaginary rock 'n' roll museum and causing a holy ruckus. The irony is that, 25 years later, RUN DMC is being welcomed onto that hallowed ground. On Saturday, the group will be inducted into the real Rock and Roll Hall of Fame.

"In that 'King of Rock' video, we were snatching the wigs off the Beatles' heads, stepping on Michael Jackson's glove and pulling the plug on the Jerry Lee Lewis video," says Darryl McDaniels — the DMC in RUN DMC. "I remember people were saying that was kind of prophetic: 'You guys are bound for the Rock and Roll Hall of Fame because of that.' "

RUN DMC will not be the first rap group to make it into the Rock and Roll Hall of Fame — that was Grandmaster Flash and the Furious Five. But RUN DMC did achieve a number of historic firsts during its heyday in the 1980s.

The music of RUN DMC was raw and hard-hitting at a time when even heavy metal was sounding kind of tame. It challenged notions of what black music should be, and it had a familiar edge for rock fans.

"When we came onto the music scene," McDaniels says, "a lot of the other rappers were using, what? Funk. R&B. We said, 'If we use the rock guitar edge, it's a little harder than disco. If we could put that hard sound with this rough attitude, we're bound to get some attention.' So the rock 'n' roll edge, having a rock guitar, was kind of the icebreaker to say we're familiar. We have something in common."

"Hollis, Queens," McDaniels says. "It was a lower-middle-class suburban neighborhood. It was the late '70s when hip-hop came into the neighborhoods of Queens. It wasn't Brooklyn, it wasn't the Bronx, it wasn't Harlem. It was tree-lined streets, fences around the houses. We had grass."

Simmons and McDaniels developed a distinctive style that was sparse and heavily rhythmic, and that often had a sly sense of humor. With jugglers' precision, they tossed words back and forth, never losing the beat.

RUN DMC's debut single — "Sucker MCs" backed with "It's Like That" — appeared in 1983 and was an underground sensation. A couple of years later, the group hooked up with a '70s hard-rock band that was then half-forgotten: Aerosmith. The collaboration bridged the worlds of rock and rap, and put the careers of both groups into overdrive.

"Eighty percent of the listeners was like, 'Oh my God, this "Walk This Way" record is incredible.' But you had your 20 percent of loyal rock 'n' roll fans: 'This is a blasphemy. Who does RUN DMC think they are?' "

What many consider RUN DMC's definitive track came out in 1986.

"Our signature tune? It would probably be 'It's Tricky,' " McDaniels says. "Because it's the whole blend of rock 'n' roll, storytelling, excitement, creativity and a sense of truth, without degrading women and without glorifying violence."

Saturday, when RUN DMC accepts its induction into the Rock and Roll Hall of Fame, the group's DJ will not be there. Jam Master Jay was shot to death in 2002. The case is still unsolved.

"For Jay, this would be a crowning achievement of what a culture and an art form was able to accomplish," McDaniels says.

RUN DMC called it quits after Jam Master Jay was killed. Joseph Simmons now goes by the handle Reverend Run and appears on a reality show on MTV. McDaniels travels, speaking on the history of hip-hop and telling the story of how the street culture of a few New York neighborhoods struggled for — and won — respect.

"We went to the backstage door for a sound check," McDaniels says. "Boom, boom, boom, boom. Security would come. They would look at us and shut the door. Boom, boom, boom, boom. 'Yo, we're RUN DMC.' And Jay would be standing there with the turntables and the records around his neck. 'You mean to tell me I'm paying you all my money just to play records?' Jay would say 'yup' and put his hat backwards, and gallop past the guy."

Ashley Kahn is the author of Kind of Blue: The Making of the Miles Davis Masterpiece.

RUN DMC On The Birth Of Rap 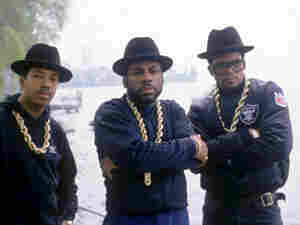 Many have told the story of rap's birth — how, in summer evenings in the late '70s, enterprising DJs would lug turntables and album-filled crates to outdoor locations in the Bronx and Brooklyn, and plug into the bottom of a light pole to make a moveable disco. How the DJs would keep the party going, spinning funk, disco and even rock; the wider and more surprising the variety, the better.

Now and then, a voice would be heard, rhyming rhythmically over an instrumental break in the music, talking up the DJ's spinning expertise and urging the party on with lines like "Throw your hands up in the air / Shake 'em like you just don't care."

"It wasn't even hip-hop or rapping yet; it was DJing," RUN DMC's Darryl McDaniels says of the impromptu dance parties of his teenage years in Queens, N.Y. "The DJs would play until the police would come and go, 'What are you kids doing? You can't have a concert in the park!'

"This whole hip-hop thing was a normal part of our youthful upbringing," McDaniels adds. "It was as common as playing basketball. I wanted to be a DJ, but I realized that the DJs had these guys called MCs that would get on the microphone and excite the crowd — tell the people this is the place to be, and, 'This is the party, say ho!' "

McDaniels started to write raps, and soon partnered with neighborhood pal Joseph Simmons. Simmons' brother Russell had begun to promote rap nights in various community centers, and to manage rap acts. The family connection proved helpful. After resisting the pair's entreaties to book and manage them, Russell Simmons relented, choosing the name that the world would come to know.

"We wanted to be the Devastating Two, or the Dynamic Two MCs, something like that, because there was the Furious Five, the Funky Four, the Treacherous Three. But Russell was like, 'No.' He said, 'You're gonna be RUN DMC now.' When we heard it the first time, we were 17 and 18 years old. We were crying, 'Russell, that's the fakest name ever! Oh, the Bronx and Manhattan is gonna hate us.' It didn't take too long for people to say, 'Yo, RUN DMC is a dope name.' "

Twenty-five years after RUN DMC's first single was released, McDaniels sees the group's success as coming from a deliberate decision to create music that was sparse, hard-hitting and extremely rhythmic — just the way it sounded in those city parks.

"See, when the [rap] pioneers like Kurtis Blow and Grandmaster Flash started making records," McDaniels says, "it was like, OK, we got to make a radio-friendly record. So let's rap over a song that's a hit right now, like [Chic's] "Good Times." ' It became more show-bizzy. But when me, Run and Jay started, we just did what we had been doing in the basements and on the streets.

"Another thing was, we didn't change our appearance," McDaniels says. "The first rappers dressed like the disco and funk stars. We just dressed like we always did — Adidas sneakers, Lee jeans, Kangols, the gold chains. We were the reflection of our audience. It wasn't about show-biz for us."

Having witnessed the birth of rap — and having played a major role in establishing its widespread popularity — McDaniels says he's proud of how far hip-hop culture has come. But he adds that an essential, universal message of the music seems to have been lost.