Accessibility links
Documentary Recounts the Last Days of Left Eye In 2002, TLC rapper Lisa "Left Eye" Lopes died in a car accident while on vacation in Honduras. Much of her trip to the Central America nation — including her fatal crash — was filmed, and this footage has been turned into a VH-1 documentary, Last Days of Left Eye. The film's director, Lauren Lazin, talks to Farai Chideya about this new look at Left Eye's life and death.

In 2002, TLC rapper Lisa "Left Eye" Lopes died in a car accident while on vacation in Honduras. Much of her trip to the Central America nation — including her fatal crash — was filmed, and this footage has been turned into a VH-1 documentary, Last Days of Left Eye. The film's director, Lauren Lazin, talks to Farai Chideya about this new look at Left Eye's life and death. 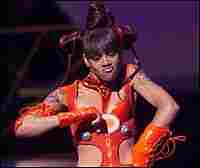 In 1992, three young women from Atlanta exploded onto to the music scene.

CHIDEYA: T-Boz, Left Eye and Chilli made up the pop phenomenon known as TLC. Their bright, baggy clothes and playful jams brought out the girl in us, and their sexually progressive lyrics spoke to the women in us. The trio instantly shot to the top of the charts and stayed there. It was their biggest hit, "Waterfalls," that made TLC a household name.

TLC: (Singing) Don't go chasing waterfalls. Please stick to the rivers and the lakes that you're used to.

CHIDEYA: They are still one of the best-selling female R&B groups of all time. But success didn't come without controversy.

Lisa "Left Eye" Lopes was the heart of TLC and she was constantly in trouble. Her run-ins with the law and substance abuse rocked TLC. In 2002, at the age of 30, Left Eye died in a car crash during a spiritual retreat in Honduras. She filmed the trip. Now that footage has been turned into a VH1 documentary called "Last Days of Left Eye."

Lauren Lazin directed the film. I asked her if Left Eye had made peace with her inner demons before she died.

Ms. LAUREN LAZIN (Director, "Last Days of Left Eye"): No. I think she is very much a work in progress, and I think that's part of what makes the film so relatable and so haunting. You know, so many people who have seen this film have told me that it's stuck with them for days afterwards, and I think that is because she is willing to be so raw and so open and naked and personal.

CHIDEYA: Well, let's take a listen to Lisa "Left Eye" Lopes talking about what happened after she burned down her boyfriend's home.

Ms. LISA LOPES (Singer): And when I got outside, I looked at that house and the feeling came over me like, wow, the house of evil is burnt to the ground, it's burning.

CHIDEYA: So Lauren, back me into this story. Tell me - because you have some really amazing footage of her and Andre, her boyfriend and ultimately the man whose house she burned down. Back me into that story. Tell me how they met and kind of what their relationship was like.

Ms. LAZIN: I think Andre Rison was the love of Lisa's life. She talks about him with a lot of passion. They certainly had a tumultuous relationship. And I would say that it culminated in her burning her boyfriend's house down. But, you know, they stayed together for years afterwards. And many years afterwards, he even bought her another house, which she did not burn down.

CHIDEYA: What struck me among many things was that Left Eye was the life of the party. She was always the one, you know, Chilli was the cute one, T-Boz was the kind of girl around the way, and Left Eye was the cut-up. But her life, her childhood and what she dealt with on a day to day was very far from being like the comedy hour, wasn't it?

Ms. LAZIN: A lot of that vivacity had very deep and troubled roots. She had a tough childhood. Her family was very close, but there was a lot of trouble in her relationship with her father and with her grandfather. And I think those scars remained with her throughout her whole life.

CHIDEYA: Sometimes physically. I was struck by how she literally carved into her own flesh the words love and hate, and at one point she has this poignant reminiscence.

Ms. LOPES: It said love first and then a little hate. And as you can see, hate doesn't see love anymore. I carved love in my arm with the Lady Bic razor, one of those pink Bics.

CHIDEYA: You can tell that this is a woman who is in an intense pain.

Ms. LAZIN: She is, and she acts on it and she talks about it. And I think that's one of the reasons why she's so compelling to watch is because she will go there. She will go to that place that a lot of us may think about. She will actually go there and report from it.

CHIDEYA: I was struck by something she said towards the end of the film where a car that she's riding in strikes a boy and he dies. She pays for all of the family's medical and funeral expenses. And she's holding his shoes, and she says, I don't think I'll ever get over it.

And it struck me that those words were not just for that child. It was for herself, for the abuse that she'd suffered, for the road that she'd walked. And the whole construct of her time in Honduras was I'm healing, I'm going to this natural healing center. But it's like she's moving towards something but she can't find it. What was it like to watch her struggle?

Ms. LAZIN: That's a very profound insight on your part. I actually hadn't thought about that scene in that way. I think you're right. I think you are right. She is lamenting the death of a child inside of her.

I think she had a very particular thought about death and what death was. I spoke to her one time in my life and she was saying how much she and Tupac had in common, how similar they were. And she said to me, I wouldn't be surprised if I died young as well. And she said, but, you know, I don't really see death as a bad thing, I see it as a transformation of energy, I see it in a different way than a lot of people see it.

CHIDEYA: What do you think happened?

Ms. LAZIN: I think she had a car accident. I think there's a lot of car accidents on those roads in Honduras. Unfortunately, it's not that uncommon. I've not seen any kind of evidence of foul play. There is some question as to the car itself, whether it was, you know, faulty brakes, there was something wrong with the car itself.

CHIDEYA: So you don't think that she had any hand in the car…

CHIDEYA: There's one point at which she turns to the camera and it's one of those things that really could be interpreted - that look, that final look, as I'm about to do something really crazy, which is not something that she was unknown for. Is that something that you think is a possibility, or that just people will interpret as a possibility?

Ms. LAZIN: I don't think it's a possibility. It certainly was not my intent in focusing on that moment at all. I don't think she took her own life. I think that's just an incorrect interpretation. But, you know, when you make a piece of art or a piece of film or a piece of work and you put it out in the world, it is for people to take away what they want. I think it was an accident, and a very sad one.

CHIDEYA: Well, Lauren, thanks for sharing this intimate side of Lisa "Left Eye" Lopes and your documentary.

Ms. LAZIN: All right. Thank you for your interest, Farai.

CHIDEYA: Lauren Lazin is director of the documentary "Last Days of Left Eye." She was at our NPR New York studios. And the film premieres on VH1 Saturday, May 19th.

TLC: (Singing) I which I could tie you up in my shoes, make you feel unpretty, too. I was told I was beautiful, but what does that mean to you?

CHIDEYA: Next on NEWS & NOTES, a former Washington Post reporter heads South for a little quiet and gets a whole lot more, and I sit down with Rose Stone and Larry Graham of Sly & the Family Stone.