Listen
Sly and The Family Stone's 40 Years of Music 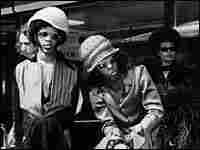 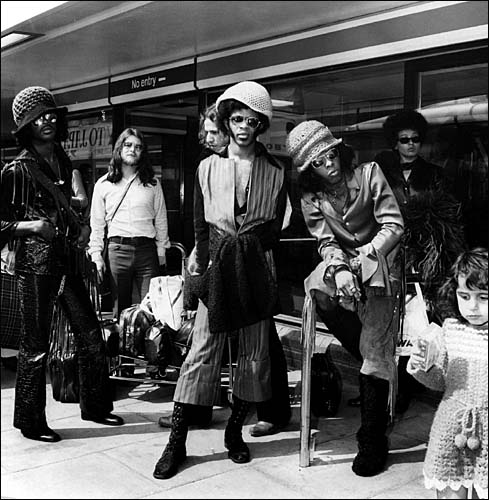 CHIDEYA: Few were ever funkier. Sly & the Family Stone lit up the '60s and '70s with an unprecedented blend of R&B, soul and psychedelic rock. A new 40th anniversary box set of their earliest albums features the band's hardest hits.

CHIDEYA: Sylvester "Sly" Stewart was an eccentric rock and soul deejay when he created Sly & the Family Stone in San Francisco. It was a racially mixed group of men and women, including Sly's sister and brother, Rose and Freddie. Together, they wrote some unforgettable anthems that were hit to their soul-power generation.

Rose says, when Sly asked her to join his new band, she hesitated.

Ms. ROSE STONE (Singer, Sly & the Family Stone): I was the last one to get in the group. I had been basically in the family band all my life. We started when we were five and six years old. So when I got in the group it was like, you know, it was like pulling teeth, in a way of speaking, because I was just so happy with being out of the musical group.

CHIDEYA: So tell me this, you grew up in this musical family, all this talent, what did you grow up listening to, the radio? What did you listen to growing up?

Ms. STONE: We didn't listen to the radio a lot. The most we listened was on Sunday mornings. And my dad would always have the radio and listening to quartets. And we made a lot of music with pots and pans and piano and whatever we could tap on. I think that's why our music ended up sounded the way it did because we fed off of each other.

Unidentified Man: (Singing) I know (unintelligible). I got a teacher for you.

CHIDEYA: Say that you're trying to convince me to come to show that you had back in '68. We're doing this show that's…

CHIDEYA: Larry, do you remember the first time or one of the first times that you went our on the road, and how was that different for you?

Mr. LARRY GRAHAM (Bass Player, Sly & the Family Stone): By that time, you know, Sly & the Family Stone, all of us were like a family so there's comfort in that. But, you know, you don't have grandma, you know. We called her Mama-M(ph). We're didn't have Mama-M's cooking, you know. But on the positive it's so exciting because you've experiencing things that you have never experienced or have never seen before.

(Soundbite of song "Dance to the Music")

CHIDEYA: Tell me about, like, an early show that you might have done and the crowd especially. Because although I was but a wee tot in the late '60s…

CHIDEYA: It strikes me that people were crossing boundaries, whether they were racial, cultural, geographic; what do you remember about the audiences that you've played to?

Ms. STONE: I think they were taken, they were surprised because we were different. We were so different. So the audiences, many times they'd try to run up on the stage with us because they just got hysterically excited, which was good. It wasn't out of order.

CHIDEYA: Was there a moment when maybe you started playing bigger venues and you realized, wow, this is something that other people have latched onto, not just a few people at a small club but a large group of people and a generation, in a way.

Ms. STONE: When we really, really got a hold of that in our heads, when it really took hold was when we had played and sold-out Madison Square Garden several times. And then we realized - I think we were backstage when we were talking - I think we're famous.

Ms. STONE: You know, we just - because we never looked - that wasn't our goal, to be famous. We were just a bunch of kids having fun with the music.

CHIDEYA: Speaking of the music - and I want to get deeper into this - we have a blog called News & Views and you can access it through our Web site. And we had people write in before you came in, and ask - and tell us, rather, what is your favorite Sly and the Family Stone song.

So a woman named Nikki King(ph) wrote, "Everyday People" is my all-time favorite Sly and the Family Stone song. The song captures the sentiments of inclusiveness, acceptance and equality that ought to be the goals of a fair and just society. Sly's lyrics and beat capture the energy and hopefulness of an era.

Ms. STONE: That is beautiful. That is my - that's exactly how I feel, my sentiments exactly. I love that song.

Ms. STONE (Vocalist, Sly and the Family Stone): (Singing) We've got to live together.

Ms. STONE: I have other reasons that I like other songs, but that one in itself says the most and speaks to who we are and who everybody else is.

CHIDEYA: What's your favorite just on a personal level?

Ms. STONE: On personal level, and they were my favorites for different reasons. I think "Hot Fun in the Summertime."

(Soundbite of song "Hot Fun in the Summertime")

CHIDEYA: Larry, I'm going to give you a shot at responding to this one. One of our colleagues on a show DAY TO DAY felt like writing in, Karen Grigsby Bates. She is amazing. And she wrote that her favorite song was "Thank You For Letting Me Be Myself."

(Soundbite of song, "Thank You For Letting Me Be Myself")

CHIDEYA: She said it was the song that got everybody out on the floor. It was always party time when that was played.

CHIDEYA: What do you say, Larry?

Mr. GRAHAM: I mean that's wonderful, and a lot of people felt like that and still do. It's a great song. I think it stood up to until today.

(Soundbite of song, "Thank You For Letting Me Be Myself")

CHIDEYA: Let me ask you about Sly. He has not seemed to have weathered the years as well as you have. What do you attribute that to?

Ms. STONE: Well, you know, he was in a position to take the brunt of whatever came at all of us. So I'm sure his response to a lot of life, the way this life takes you, ups and downs, I'm sure he's, you know, it's taken a toll on him more so than maybe it did on me. But he's out now. He's performing now. He didn't…

CHIDEYA: Are you guys tight?

Mr. SLY STONE (Vocalist, The Sly and the Family Stone): What I would like to do is sing a song together.

CHIDEYA: Did you feel like at the moment that you played Woodstock that it was more than a moment, that it was, you know, the kind of unity where you had everybody, you know, you and Carlos Santana and all these bands of different stripes and colors performing on that stage? Did you feel like something magical was happening, Rose?

Ms. STONE: Well, we knew something magical was happening. I think after we realized that it was a sea of people in front of us. It was about 5:00 AM when we went on and it was dark, and we were playing, we were playing our best.

Ms. STONE: And the sun started to come up and all of a sudden all we could see was just a sea of people. I think it was like an apex of our group. I don't know that it solved anything racially or - I don't know about that.

Unidentified Man #3:(Unintelligible) If you throw the peace sign up and say hi, get everybody to do it…

CHIDEYA: As your group moved into the '70s, you seemed to become more inward focused, more pensive in your sound.

Ms. STONE: (Singing) You got that right…

CHIDEYA: Do you remember making a conscious shift, or was this something that just happened as you looked at the world around you but you also dealt with your own issues. Rose?

CHIDEYA: Well, there's no way around it. You guys have created some amazing songs, and I look forward to blasting them as I'm driving around this summer. I just hope that…

Mr. GRAHAM: I've been doing that. I've been wearing my little box set out.

CHIDEYA: Yeah. Well, this was something that just even talking about you guys coming on the show got so much excitement going. And Rose Stone, Larry Graham, thank you so much.

Mr. GRAHAM: Thank you for letting us be ourselves again.

Ms. STONE: Thank you for letting us be ourselves again.

Ms. STONE: (Singing) If I could do it all over again…