Accessibility links
In a Changing Arctic, Artists Seek to Inspire Change The Cape Farewell project brings creative artists to the Arctic, where they mingle with scientists, explore the harsh but beautiful environment, seek ways to help deepen our understanding of climate change.

Listen
In a Changing Arctic, Artists Seek to Inspire Change 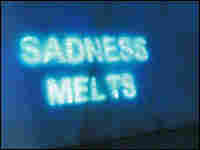 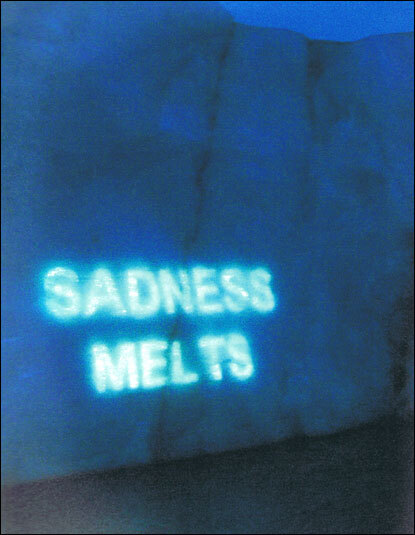 Ice Texts, 2004–2005: Cape Farewell director David Buckland projects texts on the wall of a glacier as the schooner's captain maneuvers mere meters from the ice.

The BBC documentary Art From a Changing Arctic chronicles the Cape Farewell project.

When artist and photographer David Buckland first began pitching his proposal to take a voyage to the Arctic with a bunch of artists, the response was underwhelming.

"Everybody looked at me like I was mad," he says. "So it was difficult."

But Buckland had been talking with scientists about global warming — and he was convinced they needed help to communicate what they knew about the way the world's climate was changing. Now, after three voyages to the Arctic for his Cape Farewell project, Buckland believes the artists have lived up to his expectations.

"The problem with scientists is that they make these [statements] — you know, the Greenland icecap is going to melt, or the sea level is going to rise," Buckland says. "Or the temperature is. They are very abstract concepts."

"But I think what the artists did is to find a way of making the stories personal. So if you see a glacier crumbling in front of you, then that is your story — your personal story — that you bring back."

A BBC documentary about Cape Farewell details the artists' voyages — aboard a 100-year-old Dutch schooner, the Noorderlicht — to the waters off Spitsbergen Island, north of Norway, following them as they confront a landscape at once overwhelming and exhilarating. And for each artist, the experience is indeed personal.

Sound artist Max Eastley spent his time listening to the noises of waves, wind, birds and ice. For sculptor Antony Gormley and architect Peter Clegg, the experience was more hands-on; they used the ice and snow to sculpt and build. Writer Ian McEwan spent much of his time observing. It led him, he says, to a fuller understanding of what could be lost in the future: caribou seen across a great distance, snow a thirsty traveler can drink without worrying about its purity.

Sculptor and photographer Alex Hartley, an outdoorsman and adventurer, came up with a playful notion to illustrate the way human beings historically relate to newly discovered land — in this case land that had been covered by ice for centuries.

"I wanted to find the most pathetic bit of land I could stand on and try and push through a claim for an island," he says. "So I started looking everywhere on the maps, comparing the glacial retreat with what we were seeing." The BBC documentary recorded the moment Hartley "discovered" his island; now that he's back home, he's pursuing his ownership claim. He's even accepted architectural bids for a structure to be built on his rocky spit of land.

"They vary from beachfront properties to hermit's hideaways," Hartley says. "I like the idea that I could cast out and open up the project to whoever wanted to put stuff into it."

Hartley says there was tension at times between those who felt compelled to create works of art during their stay in the Arctic and those who wanted to take in the environment more slowly, planting seeds for work that would come later. (He's planning a book about the experience.) There was also some soul-searching about whether the project itself was just one more example of the way people use up the environment.

Ultimately, though, there was a real sense that artists can bring something to the discussion about climate change that no one else can.

"The scientists quite rightly have to bring the facts," says choreographer Siobhan Davies, whose challenges included finding ways to move in an icy landscape, wearing heavy winter gear. "But [artists] are allowed ... to play with the human spirit, the human mind and human emotion. So maybe we are in a position whereby we can open the door to understanding, appreciating and using our inventiveness about what can be done to deal with this problem rather than what can't be done."

Cape Farewell is a continuing project. The next voyage is scheduled for September; it will include both young people and American artists.