Accessibility links
Job Crunch Sends Younger Adults Back Home The U.S. economy has lost millions of jobs in this downturn, leaving unemployed people scrambling for ways to cope. For some Americans in their 20s, the answer has been to move back home. One upside is that it has brought some families closer. 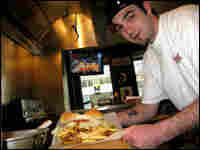 Anthony Arnold, 23, an employee at Primanti Brothers sandwich shop in downtown Pittsburgh, returned to his hometown after losing his job in Virginia. David Greene/NPR hide caption 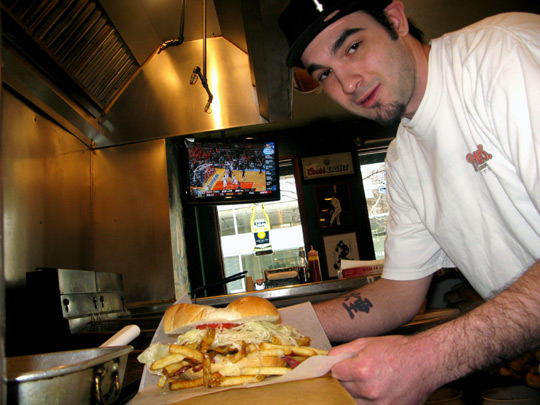 Anthony Arnold, 23, an employee at Primanti Brothers sandwich shop in downtown Pittsburgh, returned to his hometown after losing his job in Virginia.

Follow David Greene as he travels the country, and help him find interesting stories along the way. 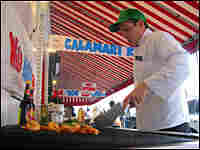 Luke Wholey, 25, returned to Pittsburgh from Montana to sell salmon and shrimp on the sidewalk, outside his family's legendary seafood market. David Greene/NPR hide caption 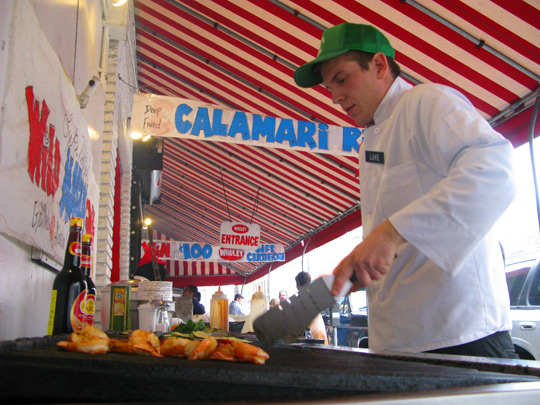 Luke Wholey, 25, returned to Pittsburgh from Montana to sell salmon and shrimp on the sidewalk, outside his family's legendary seafood market.

The U.S. economy has lost millions of jobs in this downturn, leaving unemployed people scrambling for ways to cope.

For some Americans in their 20s, the answer has been to move back home.

I heard about this on a recent walk around Pittsburgh, where I grew up.

I hadn't planned interviews for a particular story. I was just meeting people, and chatting. But randomly, I kept running into 20-somethings who had returned to their roots after losing work.

Returning To The Grill

One of my first stops was Primanti Brothers, a legendary Pittsburgh sandwich shop, where I got to talking with the man at the grill, 23-year-old Anthony Arnold.

Turns out he was a victim of the recession.

"I was living in Virginia for two years. I just came back," Arnold said. "I was working for Circuit City, running the audio shop, the installation department. And they're out of business. So, I had to come back here where my heart is, Pittsburgh. Born and raised. There's no other place, man."

Arnold was back with family, and back in his old job with Primanti Brothers.

Maybe he hadn't planned on working back in a restaurant now. But when his old friends at Primanti's said he'd be welcome back, given the current job market, it didn't take him long to say yes.

From Carpenter To Fishmonger

As I spent some time walking around my old city, I realized Arnold wasn't alone. In Pittsburgh's Strip District — a popular neighborhood of warehouses, ethnic shops and eateries — I found Luke Wholey selling fish on the sidewalk.

"Moving back to Pittsburgh has been the best thing that's happened to me," he said.

For the last six years, Wholey had been working as a carpenter in the wilds of Montana.

"I'd work four 10-hour shifts, and then three days off — I'd either go hunting or fishing," he said. "I was living the dream for a while, until it all came to an end."

The dream ended when the contractor he was working for folded.

"I tried to stretch it out as long as I could, but when I finally, completely ran out of money, I had to come home," Wholey said.

In Pittsburgh, it certainly doesn't hurt to have Luke's last name, Wholey. The family runs the landmark Wholey's fish market in the Strip District. They've been in business almost 100 years.

The recession has brought Luke back to the family trade. He's opened his own seafood grill, and he's been making money selling plates of fish or shrimp outside the family market.

"Got this Wild Alaskan Grill started," he said. "This is my ninth day of business and we've been through 240 pounds of grilled salmon."

Just blocks away, I met a guy named Dusty Rowe, and we started chatting.

"I lost my job in Ohio, and had to move back here," he said.

Rowe was working for an excavation company in Ohio. It laid off 58 people last year.

Anthony Arnold and Luke Wholey had connections. And they picked up jobs quickly when they got home. Rowe's not so lucky. He's been struggling.

"Construction's not booming," he said. "You gotta know someone to get in. It's horrible."

But like those other guys, he's OK being home.

Well, it works, except for that part about being back with his parents.

"That's what I wanted to be — a 26-year-old basement dweller living with my mom and dad," he said, with a heap of sarcasm.

His mom, Ronda Allen, was spending the day with him. She's been liking the situation.

And it's not just her son. She has two brothers in their 30s who were struggling and moved back in with her, too.

"It's like a family house," she said. "People go away, but because of the changing times, they don't succeed. And they come back."

She was smiling as she said this. This recession, which has brought nothing but misery for millions of Americans, has brought her family back together.