Accessibility links
The Record Of Singing: Opera Across The Ages NPR's Tom Huizenga takes Scott Simon on a guided tour of a fascinating new set of opera CDs, documenting singers and their recordings from 1898 to 2007. Along the way, hear opera great Enrico Caruso in his first recording session and the penatrating sound of dramatic soprano Eva Turner. 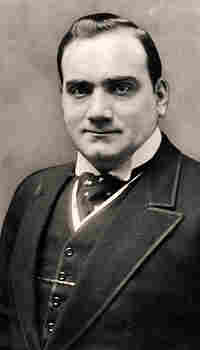 The famous Italian tenor Enrico Caruso's career blossomed alongside the success of the gramophone. Caruso made 250 records before his death in 1921. EMI Archive Trust hide caption 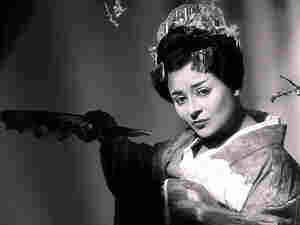 Spanish soprano Victoria de Los Angeles, as Madama Butterfly, is one of many great artists included in The Record of Singing. EMI Classics hide caption 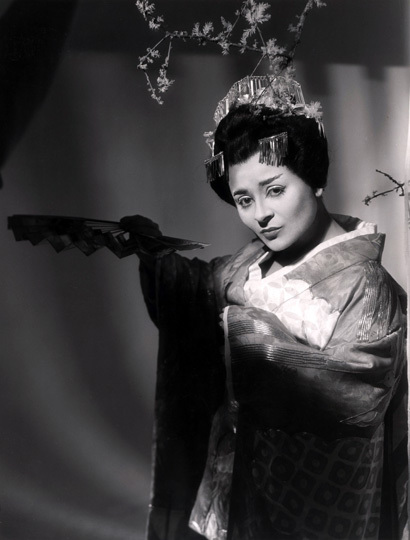 Spanish soprano Victoria de Los Angeles, as Madama Butterfly, is one of many great artists included in The Record of Singing.

Opera can touch the heart, stir the soul and soothe the savage breast — yes, that is the correct quote. To do all of those things and more, there's a new collection of opera called The Record of Singing: a pair of box sets, 10 CDs each, covering the history of recorded opera from 1899 to the present.

As NPR's classical music producer — and an opera fanatic — I took Weekend Edition Saturday host Scott Simon on a brief, chronological guided tour. (You can hear the singers we discussed on the left-hand side of this page.) We began with the earliest recording in the set, a scratchy-sounding rendition of the aria "C'est l'histoire amoureuse," by American soprano Ellen Beach Yaw in 1899.

She's an American soprano, little more than a footnote in opera books today, who was known for her freakish high notes. It was almost a gimmick. These are not nice notes, let's put it that way; they sound more like little chirps. But she knew where the money was. Yaw sang Lucia di Lammermoor at the Met in 1908, and the audience gave her 29 curtain calls. Afterward, she was offered a contract, but she turned it down to follow the bigger money to be found in concert tours.

Even for people who don't know anything about opera, most have at least heard the name Enrico Caruso.

His name is synonymous with opera. Caruso is the original "Ridi, Pagliaccio" guy — the one in the clown suit singing his guts out. His career blossomed at the very same time that the recording industry blossomed, and they fed off of each other, making a lot of money in the process. In The Record of Singing Caruso is represented with Donizetti 's aria "Una furtiva lagrima," made at his very first recording session, in 1902 in Milan. (Why the producers of the set chose this over the even more stunning 1904 version is a mystery to me.)

Caruso was one of those singers who had it all. He was like a great film star who could play comic roles, play the heavy and play serious roles. Not only is Caruso a fantastic singer, but he also made 250 recordings, a wonderful document of operatic singing early in the history of the recording industry.

In the early years, singers recorded their voices by singing into giant conical-shaped horns. In 1925, electrical recording techniques were introduced, and microphones replaced the old horns. All the better to catch the huge, canyon-wide volume of a singer like Eva Turner, singing "In questa regia" from Puccini's Turandot.

Whenever I hear Eva Turner, I imagine just what it might have been like to experience such a voice in the opera house. The security of her high notes and how effortlessly she reaches them is absolutely thrilling to me.

One piece of advice: Don't listen to French soprano Mado Robin's records if you have a dog in the house, or any loose dental work. Her high notes are the highest ever emitted on record. In this particular song, "Chanson Provencal," she sings a B-flat above high C, and she could go even higher than that. In 1954, she came to San Francisco to sing in Verdi's Rigoletto, and she kept tacking a very high note onto the end of the big aria. The conductor got so frustrated that he refused to lead any more performances. Robin actually did have a nice singing technique, and she died of cancer at the height of her career at age 41.

Spanish lyric soprano Victoria de Los Angeles was a tireless champion of her country's majestic musical heritage. But she didn't want to be typecast only as a singer of Spanish music. Perhaps that's why she amassed such an enormous repertoire, from Monteverdi to Stravinsky. Her beautiful, pure, agile tone, her charm and her natural sense of drama made her one of the very best as Madama Butterfly and Mimi in La Boheme. As an encore to a recital, she often picked up her guitar and accompanied herself on "Adios Granada," with incredible control — equal parts fire and lace.

Canadian dramatic tenor Jon Vickers was an intense singer and an intense person. He was stubborn in his opinions and morals, willing to argue with colleagues and walk out of productions that he didn't believe in. But, oh, what a voice. Opera writer John Steane says that Vickers, like Caruso, was so great that it's almost as if he dropped in from another planet.

"What makes him something that cannot be suggested by the term 'a tenor,' " Steane says, "is that he sings with such full soul that one senses an exultation which might very well be called religious."

In this set, Vickers is represented by the "Flower Song" from Bizet 's Carmen. Note how this burly, big-voiced heldentenor (one of the finest Tristans of his generation) takes the high B-flat at the end. He sings it in an absolutely gorgeous mezza-voce (half voice) that will make the hardest heart melt.

One of the most exciting, exuberant singers today is the Mexican tenor Rolando Villazon.

Villazon's career quickly shot to the stars only a few years ago, with critics falling over themselves and calling him the next Domingo — and raving about the "thrusting brightness on the top notes" and his "dramatic power and raw intensity." It's all there, and more, in the aria "No puede ser" from the Spanish zarzuela La Tabernera del Puerto.

And then, a singer's worst nightmare came true for Villazon. His golden voice began to fail. It was a classic case of burnout, so Villazon took five months off to help heal his voice and slow his hectic lifestyle. He only returned to singing a few months ago, but he has already canceled some performances. I hope it's a temporary setback, and that a voice this thrilling will be with us for a long time.

These seven singers represent a fascinating history of operatic singing over the last 100 years, and The Record of Singing is a fascinating 20 CDs. I could use at least 20 more.