Accessibility links
Dan Deacon Interview On 'Bromst': Manic Dance Music, With Lasting Effects Electro-acoustic wizard Dan Deacon made his name as a frenetic one-man band who embedded his act on the dance floor. But on his new album, Bromst, he's aiming for a meaningful sort of pop — and employing a 15-person touring ensemble. 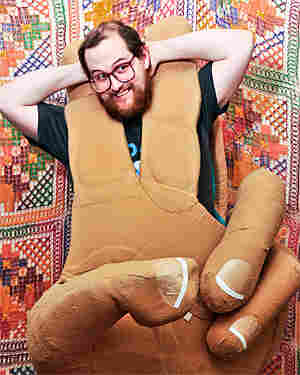 Dan Deacon has a degree in electro-acoustic and computer music, which he has applied to making frenetic yet thoughtful dance music. Josh Sisk hide caption

Dance music has always presented a fundamental problem for its composers: Listeners often turn off their brains to enjoy it. Dan Deacon is challenging that notion.

Over the years, the Baltimore-based electronic musician became known for his high-energy live shows. His equipment allows him to perform as a self-contained unit — no additional musicians necessary. And rather than take a perch high above the audience, he sets up in the middle of the dance floor, getting shoulder-to-shoulder with his fans.

But now, Deacon is adding acoustic instruments to the mix: He's playing with a band of 15 musicians on his current tour. And his new music is constantly shifting — sometimes dark and foreboding, sometimes jubilant and delirious. That energy still comes through on his new album, Bromst, which means nothing in particular.

"I just wanted it to be a low, percussive-sounding word," Deacon says. "I'm also failing in my promise to myself that I would make up a different lie every time I was asked that question."

In an interview with host Robert Smith, Deacon says he didn't intend to remain a one-man band. He says he was constrained by economic resources when he first started performing, but now he has the ability to employ live musicians, too.

"It was never the goal to be a solo performer," he says. "It was just something that made the most sense at the time."

Compared to Deacon's first full-length release, Spiderman of the Rings, Bromst features a much more thorough blend of acoustic and electric instruments. Deacon says it wasn't a reaction to critics who called his first album "cartoonish" — processed, high-pitched chanting is still a trademark of the new album — but that it was all part of an effort to make more substantial music.

"I just wanted to make a record that wasn't escapism," he says. "Like, I didn't want to write another record that was devoid of meaningful content. I feel like there's a lot of that going around, especially within dance music — a lot of it is just, you know, music that's written exclusively for abandoning reality in an altered state of mind. And I think an altered state of mind is very important, but in a responsible sense.

"After years of touring, I began to think, 'What am I doing other than the immediate sort of, like, candy reaction?' The way candy is like, 'Oh, this tastes really good, I enjoy eating it,' but when it's done, it doesn't really have any lasting effect. I wanted to start working on something that had a lasting effect."

Of course, the transition from solo artist to, in essence, large ensemble composer was not wholly natural.

"Rehearsing was quite a challenge," Deacon says. "Getting 15 people to have large blocks of their schedule free. Finding a space where we can practice for large periods of time with three drummers and large p.a. speakers, and not drive people insane, proved to be almost impossible."

From The Crowd To The Stage

To help circumvent the challenges of touring with such a large group, Deacon is inviting people in all the cities he visits to join him on stage. He says he plans to distribute the sheet music of Bromst to all interested performers.

"I guess we'd send out the parts and be like, 'If you're interested in this, review the part, see if it's within your abilities, and e-mail us at least a few days or a week before,' " he says. "And we'll arrange to sort of have a weird, creepy, awkward audition. And if it works out, they'll join us; and if it doesn't, we'll do it next time."

Deacon has grand ambitions: He says he'd love to collaborate with a symphony orchestra. But he's keeping his dreams in check for now.

"By the end of this tour, I might be saying, 'Well, now I remember why I was a solo act,' " Deacon says. "Because it might not work. The first couple of weeks might be awkward in trying to figure out how these new shoes fit without disenfranchising my current fan base and the fan base that's coming in."

In other words, there's little room for him to fail, but many opportunities for him to do so.

"But that's the exciting part," Deacon says. "For the last three years, I've been working on Bromst, and that's all that encompassed my brain. And now that it's out, it will change the way that I think musically. Which is something that I'm very excited about."