Accessibility links
Postal Deficit Grounds Wilderness Mail The U.S. Postal Service, facing a $6 billion deficit, has decided to end the last remaining backcountry airmail service in the lower 48 states. The service that some see as a crucial lifeline in Idaho's backcountry is scheduled to stop June 30. 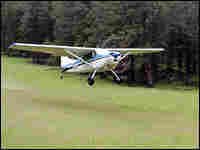 An Arnold Aviation mail plane lifts off from the airstrip at the remote Campbell's Ferry Ranch in Idaho after a weekly drop. The route is the last backcountry airmail service the U.S. Postal Service provides in the lower 48 states, and it's scheduled to end June 30. Doug Tims hide caption 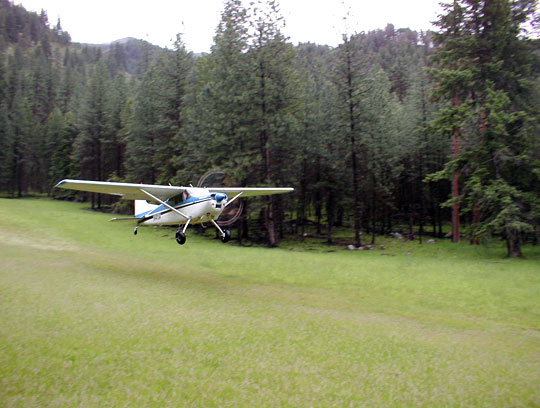 An Arnold Aviation mail plane lifts off from the airstrip at the remote Campbell's Ferry Ranch in Idaho after a weekly drop. The route is the last backcountry airmail service the U.S. Postal Service provides in the lower 48 states, and it's scheduled to end June 30.

Backcountry Mail By The Numbers

Approximate distance, by hiking trail and roads, from the free post office box offered by the postal service in Cascade, Idaho, to the Campbell's Ferry Ranch: 287 miles

Approximate distance, by air, from Arnold Aviation in Cascade, Idaho, to the Campbell's Ferry Ranch: 60 miles 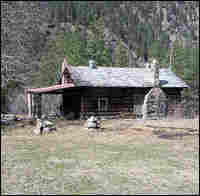 The restored Zaunmiller Cabin at the Campbell's Ferry Ranch was built in 1906 along a wilderness trail used by miners prospecting for gold. Doug Tims hide caption 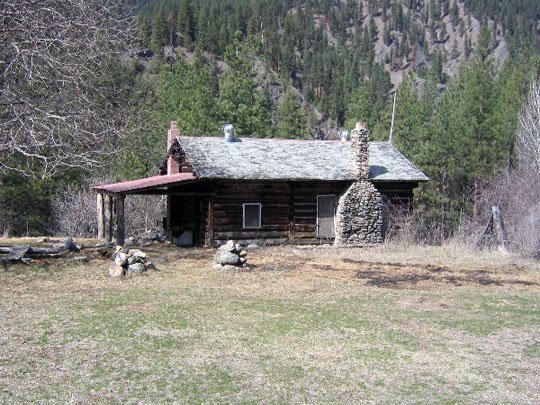 The restored Zaunmiller Cabin at the Campbell's Ferry Ranch was built in 1906 along a wilderness trail used by miners prospecting for gold.

Doug Tims has always believed in the postal service creed.

"(It's) always been rain, snow, sleet and dark of night," Tims says. "Mail (still) goes through."

But there's nothing in the slogan about continuing high-cost deliveries in the face of a $6 billion deficit. So, the U.S. Postal Service is ending airstrip service to about 20 addresses scattered across hundreds of square miles of Idaho backcountry inside the Frank Church-River of No Return Wilderness.

It's a route served by bush plane, and it's the last backcountry airmail service in the lower 48 states, according to the USPS. The final mail plane flight is scheduled for June 30.

"I hate to see it end," says Tims, who owns Northwest River Company and the remote and historic Campbell's Ferry Ranch on the Salmon River. "It's our contact with the outside world."

There are just three ways to get letters, bills, bank statements, catalog orders and other mail to the ranch:

• A bone-jarring 26-mile drive, including six miles of switchbacks down a steep canyon wall, followed by a four-mile hike;

• A two-day float down the Salmon River;

• Or, a 35-minute mail plane flight over mountains, canyons and forests.

The flights from Cascade, Idaho, have served ranches, outfitters, lodges and a University of Idaho research station for 50 years. But the $46,000 annual cost is too much for a postal service $6 billion in the red.

"Times change," notes Al DeSarro, spokesman for the western region of the USPS. "The postal service has to look at that ... just as many businesses today are having to adjust to the changing economic realities of what it costs to do business."

So, instead of once-a-week flights into the wilderness, the USPS is offering free post office boxes at the post office in Cascade. That makes no sense to Carol Arnold of Arnold Aviation, which has had the mail plane contract for 34 years.

"Many of these places are inaccessible totally, except by air," Arnold says. "So that would mean that they would have to fly out to pick up their mail."

The wilderness mail drops cost about $44 a week per customer. That's close to 10 times the average cost of weekly delivery ($4.52) to each of the nation's 129 million addresses, according to figures provided by the USPS and the House Subcommittee on Federal Workforce, Postal Service and the District of Columbia.

The mail plane also delivers groceries, parts, medical supplies and other necessities — at additional cost paid by the recipients. It's also an emergency lifeline for backcountry residents and the hikers, hunters, fishermen, river runners and researchers who visit.

Arnold Aviation depends on the mail contract to help support its flights. Tims argues that grounding the mail plane "... would increase the remoteness and the risk factor ... not only for the people who are living there but for the members of the public who pass through regularly."

"It's something we didn't want to do," says DeSarro, the USPS spokesman. But given the budget deficit, he adds, "this was the prudent way to go."

Tims worries about the implications for other higher cost service across the country.

"If you take that point of view to the entire mail system, there's a huge swath of rural America that wouldn't be served by regular mail service," he contends. "They've (had) the commitment over the years to the American public to deliver the mail. And I think this is part of that commitment."