Accessibility links
A Mean Golf Swing, And An Uncle Named Tiger When the world thinks of golf, Tiger Woods usually comes to mind — but another Woods waits in the wings. Tiger's niece, Cheyenne, a freshman on the highly ranked Wake Forest University women's golf team, is likely to draw some attention of her own. 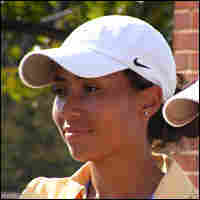 When the world thinks of golf, Tiger Woods usually comes to mind — but there's another Woods waiting in the wings. Tiger's niece, Cheyenne, a freshman on the highly ranked Wake Forest University women's golf team, is poised to raise her profile.

When Cheyenne Woods swings a golf club, it becomes apparent that she has been playing for much of her life. She drew crowds while playing at Xavier College Preparatory High School in Phoenix, where she was a state champion.

Woods, an 18-year-old who bears a strong physical resemblance to her legendary uncle, could have stayed on the West Coast to play for a powerhouse program. But instead, she chose Wake Forest, a small liberal arts school in Winston-Salem, N.C.

So far, she is thriving. Golfweek now ranks her at No. 100: an impressive achievement, considering there are close to 2,000 female college golfers.

Woods is aware of the pressure that comes with her name.

"I try to set myself aside from the Tiger Woods name and just make a name for myself," she says. "So I guess that's my goal now."

Still, being a Woods has afforded her some advantages. Her grandfather Earl Woods Sr. started teaching Cheyenne to play golf before she was in kindergarten. She played in her first tournament by age 8. She also acknowledges her uncle's influence.

"I think I first started and continued to play golf because right around the time I started, Tiger had just turned pro and won the Masters and all of that," she says. "Seeing him on TV really made me ... want to keep going out and playing ... and trying to be like him."

Dianne Dailey, the women's golf coach at Wake Forest, has tried to keep Woods focused, protecting her from an excess of media attention and from those who may be overly fascinated with her lineage.

Dailey says of Woods, "She's one of the most coachable kids I've ever had, and she picks things up very quickly. So if you're teaching her something, you only have to tell her once or twice ... and she goes with it."

Once Woods graduates from Wake Forest, she wants to play professionally. Her famous uncle has left her a big swing to live up to.