Accessibility links
TARP Inspector Gears Up To Oversee Bailout The $700 billion TARP program comes with its own internal police force tasked with ensuring that taxpayer money to bail out Wall Street is spent properly. Neil Barofsky, a former federal prosecutor, heads the new office, which is up and running, but undergoing some growing pains. 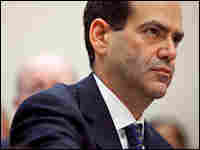 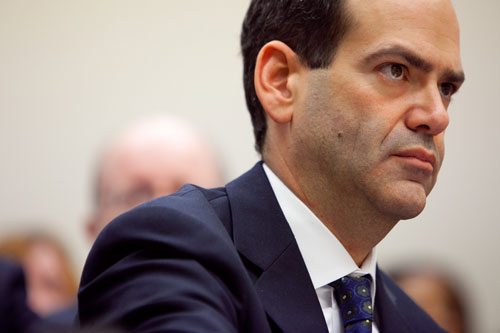 When Congress agreed to the $700 billion TARP program to bail out financial institutions, it also created a kind of internal police force to make sure all that taxpayer money was spent properly.

The Office of the Special Inspector General for the Troubled Asset Relief Program or, as it's now known, SIGTARP, is up and running, but undergoing some growing pains.

The staff has been given temporary office space in the basement of the Treasury Department building, next to the White House. Actually, on a recent visit, they'd been kicked out of the basement.

"Our basement office, which is down the hall, is being fixed," explains Neil Barofsky, who heads SIGTARP. "There is some sort of musty smell in it. They called in the HAZMAT team, and they're currently cleaning it up for us to move back in."

You might think, overseeing all that money, the 38-year-old former federal prosecutor would have a giant staff. But so far his office has hired just 36 people.

"We've got a lot of work to do," Barofsky says. "We've had some significant challenges hiring. It's so highly technical and so specified, the type of people we want. And we're trying to do with a relatively modest staff of 100 to 125.

"We have to get people who can cover a lot of ground — who are really, really top-notch, high-quality individuals. And frankly, we don't have the ability to pay what the market would pay those individuals. So we also have to find the people who want to serve their country, who want to work for a greater good, which is to protect all these taxpayer dollars," he says.

Congress is aware of the staffing problem. And it's passed legislation that would give SIGTARP the ability to cut through some red tape and to hire back retired government employees, without forcing them to give up their pensions. President Obama is expected to sign the legislation into law this week.

So far, Barofsky's modest staff has six audits under way, looking at, among other things, how banks are using the TARP money and how they are complying with executive compensation restrictions. But they're also simply trying to document the behind-closed-doors negotiations that took place. And, of course, they are looking for fraud.

"We maintain a hot line on our Web site — www.sigtarp.gov — and on our telephone hot line, 1-877-SIG-2009," he says. He relays those contacts to anyone who will listen.

"I work them into every conversation," Barofsky says. "Every time I testify in front of Congress, I always find at least one opportunity. And there's a reason: because we get insiders.

"We've already opened up one criminal investigation based on an insider at a bank who identified that the bank was — this is just an allegation — was cooking their books, that they were playing with their ratios to get TARP money. And, that is just a classic example of why we exist. If that did happen, and it is a crime, we're going to investigate it."

Angry Callers On The Hot Line

Barofsky says initially, when SIGTARP had even fewer staff members, his office line was the hot line.

He says he received some "very interesting calls. ... Maybe not any great tips, but some great insights from regular people who were just angry."

Barofsky has gotten good reviews on Capitol Hill so far. Republican Sen. Chuck Grassley of Iowa co-sponsored the legislation that will make it easier for SIGTARP to hire people. Grassley points out that the Special Inspector General for Iraq Reconstruction wasn't even created until a year after that money started getting spent. So he wants SIGTARP up and running as fast as possible.

'The Shotgun Behind The Door'

Grassley wouldn't say whether he thought a staff of 125 was enough to oversee all that TARP money. But SIGTARP is working with other federal agencies, including the FBI and the Securities and Exchange Commission.

"You know what? I hope they don't find anything wrong — that all the money that's going out the door is being spent according to law, the laws are being faithfully executed," Grassley says. "But you know, I'm not naive enough to think that's going to happen.

The Office of the Special Inspector General for TARP will be getting a new door. It's planning to move out of the Treasury Department basement and into bigger office space.