Accessibility links
Ethnic Outlets Survive In Sinking Media Market As many major nationwide news organizations are sinking in the tough economy, the "ethnic media," news organizations that tailor content toward the sons and daughters of immigrants, are thriving with growing audiences. Multiplatform interactions — television, radio and the Internet — are popular. 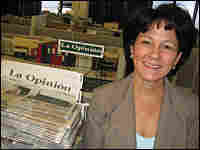 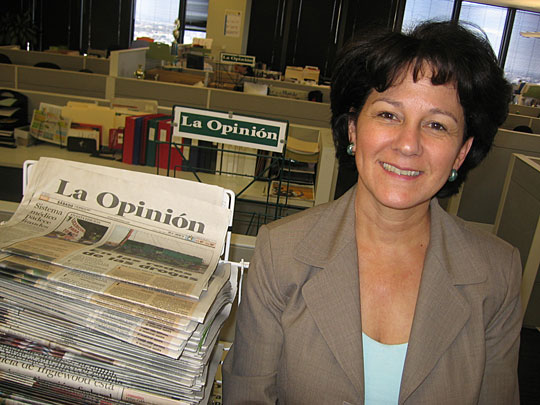 Though these are grim times for major news organizations across the country, a few organizations — often labeled "ethnic media" — are thriving.

Many of these newspapers and broadcast stations are doing well because they've tapped into an expanding audience — the sons and daughters of immigrants.

In Los Angeles, the No. 1 TV station isn't NBC, CBS, ABC or Fox — it's Spanish-language KMEX, the flagship of Univision. And it isn't just Los Angeles' top station — Nielsen says it's No. 1 in the U.S. with viewers aged 18-49. KMEX built big numbers with immigrant audiences, but is now drawing their sons and daughters — and even their grandchildren.

"I was watching last night, and they were talking about the border wars — drug smuggling and all that. But they were covering it from the Mexican side. They had the same kind of footage, but it was a different perspective, a different angle that I don't see on CBS, NBC, CNN and the other networks," Gutierrez says.

Olander says that while other media companies are laying people off or closing down, his station is actually expanding. KSCI recently launched a new local evening news show in Korean, and a local morning show in Chinese.

The two-hour, live Power Breakfast spotlights local traffic and weather reports, news and quirky features from Los Angeles and Asia. The perky show is anchored by Yiyi Lu and Andy Chang, who both grew up in Los Angeles watching Chinese TV with their parents, and American shows like Friends and The Simpsons.

"The key thing for the show is energy," Olander says. "That's why we call it Power Breakfast. It's a culture shock in terms of news — we are trying to jump out of the ordinary Chinese TV news."

Olander says stations like his used to rely on ethnic audiences that had few other options because they weren't comfortable in English. But that's not necessarily true of immigrants' children.

"We know that the first generation watches us," he says. "The second generation's much more difficult to capture, in part because they have language skills, which allow them to watch MTV, to go listen to NPR. They have a much wider array of choices. Not to mention, the second generation, which are younger, is watching less TV — they're on the Web, they're not reading the newspapers in the numbers they were. Their media patterns are changing."

That's why in addition to its broadcasts, KSCI now offers podcasts, blogs and video online in various Asian languages and in English.

The biggest Spanish language daily newspaper in the country, La Opinion, is also reaching out online. The Los Angeles paper's circulation has dipped, but it still has half a million readers.

Publisher Monica Lozano says the newspaper, which was started in 1926 by her grandfather, survived the Great Depression, battles over immigration and world wars, and it's now adapting to the recession and new media appetites. Lozano says Latino households tend to be multigenerational, multilingual and multimedia.

"So the beautiful thing is that the parents reading the newspaper, they're talking to kids who are online; the kids are talking to their parents about something they've just learned; grandparents are saying, 'But I just [saw] this on television'," Lozano says. "So the media consumption is actually very dynamic, very multigenerational. It goes across language."

Increasingly, that language is Spanglish.

Latino 96.3 FM is operated by the Spanish Broadcasting System, which owns radio stations across the country. DJs at the popular station spin a musical mix, from rancheras to reggaeton to hip-hop. On the air each morning, Chuey Martinez easily switches between Spanish and English.

"I would like to think I'm talking the way everybody else is talking. Porque hablamos ingles aqui en Los Angeles y espanol tambien. We speak both, especially if you grew up here in L.A., you grew up speaking both," Martinez says.

Martinez's father emigrated from the Dominican Republic, and his mother is Mexican-American. Like other 27-year-olds, he grew up watching telenovelas with his family and now interfaces bilingually.

"Young Latinos are very tech savvy," he says. "We like iPhones, we like the iPods, the MySpaces, Facebooks. I Twitter like you have no idea right now. I blog. I vlog [video blog] a lot. Wow, I consume it all, man." And Martinez says the media increasingly reflects that new multicultural reality. He says his million and a half weekly listeners can't be wrong.