Accessibility links
Government Cracks Down On Foreclosure Scams The surge in foreclosures has been accompanied by another distressing trend: scam artists who take advantage of struggling borrowers by promising to save their homes. State and federal officials Monday announced a coordinated crackdown on phony foreclosure rescue schemes. 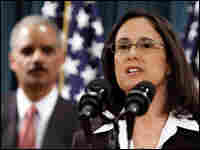 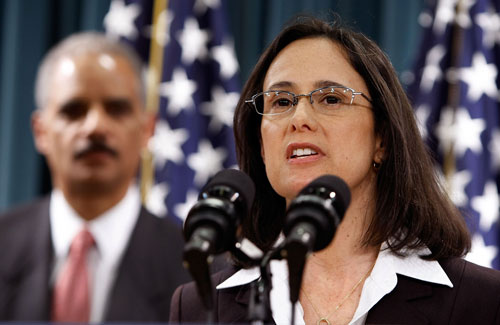 The surge in foreclosures around the country has been accompanied by another distressing trend: scam artists who take advantage of struggling borrowers by promising to save their homes.

Authorities say these false promises can leave homeowners worse off than ever. State and federal officials on Monday announced a coordinated crackdown on phony foreclosure rescue schemes.

Treasury Secretary Timothy Geithner said American homeowners have been through enough in recent years, with home prices plunging and foreclosure rates soaring — the last thing they need is to be ripped off by someone pretending he's there to help.

The Treasury Department's enforcement arm is on the lookout for fraudulent home rescue schemes. And Attorney General Eric Holder said the Justice Department has already won criminal convictions against such scam artists in New York and Kansas.

"The message is very simple: If you prey on vulnerable homeowners with fraudulent mortgage schemes, we'll find you and we will punish you," Holder said.

The federal government has created an unintended opening for scam artists with its own effort to assist struggling homeowners.

Jon Leibowitz, chairman of the Federal Trade Commission, said some phony rescue operations deceptively promote themselves as nonprofits or even arms of the federal government, using copycat logos and Web addresses such as hud-gov.us. Leibowitz says the FTC has won court orders to stop a handful of companies. And last week the agency sent warning letters to more than 70 others around the country.

"These companies are kicking people when they're down, charging enormous upfront fees, and sabotaging efforts by homeowners who could be getting help for free," Leibowitz said.

In addition to taking alleged scam artists to court, the FTC is trying to educate consumers to protect themselves — in counseling sessions and with flyers included in some monthly mortgage statements. Leibowitz said the flyers warn homeowners to steer clear of any self-proclaimed rescuer who makes exaggerated claims of assistance and insists on an upfront fee.

"These companies claim, 'We'll stop your foreclosure,' or 'We will save your home,' or 'We have a 97 percent success rate,' or 'We guarantee to reduce your payments.' But if you pay them instead of your mortgage company, you will find yourself on the fast track from distress to disaster," Leibowitz said.

Illinois Attorney General Lisa Madigan said charging an upfront fee for foreclosure help is not only a red flag, but actually illegal in nearly half the states. Madigan filed complaints Monday against two allegedly fraudulent mortgage rescue operations in the Chicago area. Altogether, Madigan has gone after two dozen companies that she says promise to help struggling homeowners, but don't deliver.

"They don't stop the foreclosure. They don't save your home. They don't reach out to your lender. They don't get you a modification. And they don't show up in court. All that they do is take your money. And you lose not just your money, but you lose valuable time that you could have been using to reach out for free, legitimate help," Madigan said.

Instead of turning to one of these rescue outfits, authorities say, homeowners who are having trouble with their mortgage should first contact their lender directly. If that doesn't work, consult one of more than 2,000 nonprofit counseling services recommended by the Department of Housing and Urban Development.

HUD Secretary Shaun Donovan says there are legitimate ways for struggling homeowners to get help. He stressed the government's own relief programs don't come with any charge.