Accessibility links
Smithsonian, Congress Share a Turbulent History Smithsonian officials are seeking the Institution's 12th secretary in more than 150 years. It's a big job, overseeing 19 museums and nine research centers. But the most difficult task is dealing with Congress. 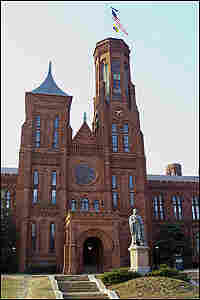 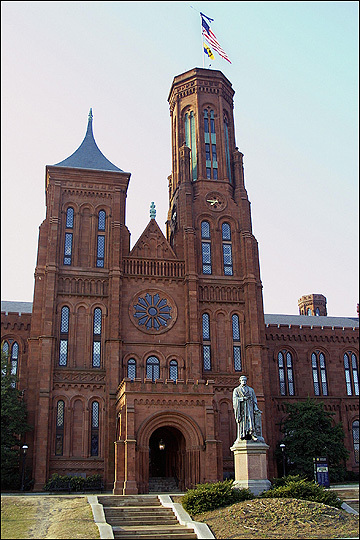 The Smithsonian's first building, popularly known as the Castle, houses the Institution's administrative offices and the Smithsonian Information Center. 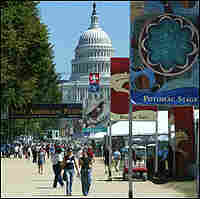 The U.S. Capitol building looms over Smithsonian exhibits on the National Mall during a 2004 celebration of the opening of the Smithsonian National Museum of the American Indian. Alex Wong/Getty Images hide caption 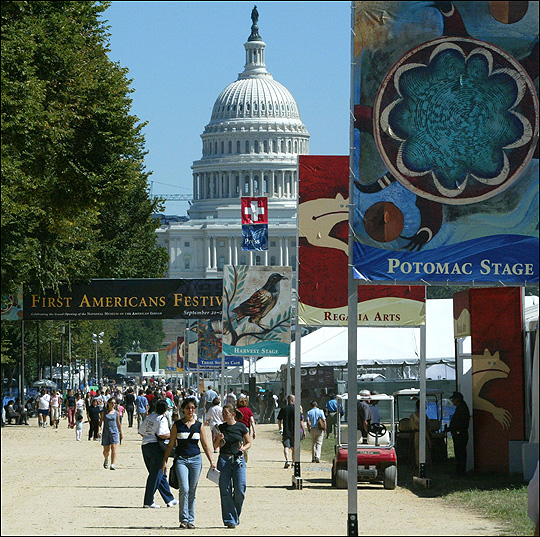 The U.S. Capitol building looms over Smithsonian exhibits on the National Mall during a 2004 celebration of the opening of the Smithsonian National Museum of the American Indian.

The Smithsonian Institution is looking for a new secretary in the wake of the messy departure of Lawrence Small. He resigned two months ago, after it was found he misused Smithsonian finances.

The role of secretary is a big job, overseeing 19 museums and nine research centers. But probably the most difficult part of the job is dealing with Congress, which provides 70 percent of the Smithsonian's budget.

In 1829, English scientist James Smithson left a gift of about a half a million dollars to the United States for "the increase and diffusion of knowledge." Seventeen years later, Congress settled on how to spend the money.

They passed legislation founding the Smithsonian Institution, which would include a library, scientific laboratories, and a museum. And from the beginning there was conflict.

Robert Sullivan, a former associate director at the Natural History Museum, sits on a bench near a statue of Joseph Henry, the Smithsonian's first secretary. He says Henry, a physicist, never believed Congress would give them enough money to be all of those things.

"He was a pure researcher," Sullivan says. "He was very concerned about American science and keeping up with the Europeans. So he saw the Smithsonian as a great research institute, not a major public museum."

Under Joseph Henry, Smithsonian-funded science became a major force in American life. During the Civil War, Union soldiers relied on Smithsonian balloons for aerial reconnaissance. Smithsonian studies of weather around the country ultimately lead to the U.S. Weather Service.

"Henry was fascinated by what caused storms," says Pamela Henson, the Smithsonian's institutional historian. "And he developed something called the meteorological project, which began to track weather across the United States."

Among other things, Henry's research established that storms travel west to east with the jet stream.

More than a century later, scientists at the Smithsonian are still breaking new ground.

On a recent morning at the Smithsonian's National Zoo, the giant panda Mei-Xiang got one of her weekly ultrasounds.

She's not pregnant now, but last year she gave birth to a cub through artificial insemination. The Zoo is hoping for another one. Head veterinarian Suzan Murray says that's the reason for the weekly ultrasound.

The National Zoo's breeding and conservation program is one of the Smithsonian's biggest success stories.

It's also expensive and depends heavily on corporate donor Fujifilm, which has already contributed almost $8 million to the project.

The pandas are a special case. Most of the Smithsonian's projects don't benefit from such a generous corporate sponsor.

Securing funding has always been a kind of dance between Congress and the Smithsonian, particularly when the work might be considered controversial.

In the late 1880s, a Smithsonian ethnologist compared Native American religious beliefs to Christianity. The secretary at the time, Samuel Pierpoint Langley, feared this radical idea would jeopardize their federal funding. Langley pressured one of his directors to officially discredit this part of the ethnologist's research.

But the decision backfired, according to Henson. The effort to taint the research became a controversy in itself.

Political considerations and public sensibilities are often a minefield for the Smithsonian.

"We are what I call a temple of national identity," says Henson. "What we put on center stage ... says a lot about what the U.S. is — our culture, history, what we believe in terms of science. What we say is very important to everyone in this country."

More recently, the Smithsonian came under fire for making changes to an exhibit of photographs of the Arctic National Wildlife Refuge.

In 2003, Sen. Barbara Boxer happened to hold up one of the photos from the exhibit during a heated debate over oil drilling in the Arctic.

Shortly thereafter, the staff at the Museum of Natural History moved the exhibit to a remote, downstairs gallery. At a Senate hearing, Secretary Lawrence Small tried to explain why.

"They did it because they felt that the exhibit would look better, and it would also avoid the issue of the Smithsonian engaging in a debate which is obviously political," Small said. "It was never the Smithsonian's intention to have this exhibit be an analysis of the oil-drilling issue in Alaska."

In this case, the Smithsonian's action may have paid off. Sen. Ted Stevens of Alaska, who at the time chaired the committee that funds the Smithsonian, praised the decision to move the show. He said the Smithsonian wouldn't get money if it engaged in political advocacy.

His extravagant lifestyle, his half-a-million-dollar salary and unauthorized spending became the real threats to Smithsonian funding.

Congress froze a portion of its appropriations until the Smithsonian's house was put in order.

The search is on for Small's successor. Like every other secretary, he or she will have to charm, lobby and justify decisions to Congress.

That was a challenge for even one of the most respected and charismatic of the Smithsonian heads.

S. Dillon Ripley, who was secretary from 1964 to 1984, once described looking out the window from his office on the Mall towards the halls of Congress.

"These great buildings were like a pride of surfeited lions, lying there in their own surfeit, fed to the teeth with money, none of which was coming to the Smithsonian," Ripley said.

The search for the Smithsonian's next secretary is expected to take about a year.