Accessibility links
Marcus Roberts: Playing Jazz History Under Modern Guises The pianist is a jazz instructor now, but he remains a lifelong student of the music. He visits NPR's performance studio to demonstrate his own approach to the classic tunes of jazz greats, as heard on his new album, New Orleans Meets Harlem, Vol. 1.

Recorded in NPR's Studio 4A:

Information on purchasing this album is available at Marcus Roberts' Web site. 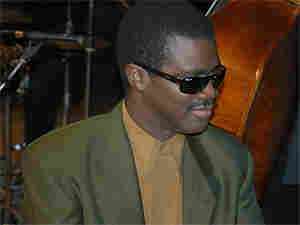 Jazz pianist Marcus Roberts has experienced plenty of success in his career. He was invited to tour with Wynton Marsalis at age 21. In 1989, he began releasing solo albums, and his first three went straight to the top of the jazz charts.

For the past five years, he's added teaching at Florida State University to his busy schedule. But Roberts is also a student of jazz history. He's known for taking famous jazz compositions and updating them with his own style.

"It's important, I believe, to be able to explain clearly to people what you do, why you love doing it and why they should care about it," he says.

His latest album is New Orleans Meets Harlem, Vol. 1, and it traces the history of jazz from the Crescent City to New York. Roberts dropped by NPR's Studio 4A to demonstrate on the piano as he spoke with Michele Norris. He began by exhibiting the early Jelly Roll Morton tune "New Orleans Blues" as the composer might have played it — and then as Roberts adorns it himself.

"Yeah, that's the beauty of jazz music, is that we're able to manipulate and change the original version of something," Roberts says. "But our goal is always to keep intact the underpinning of it. We don't want to change the general intent."

On The 'Reconciliation Of Differences'

For Roberts, jazz merges differing styles and the communities that fostered them. He agrees with Norris' suggestion that jazz and blues are meetings of both city and country.

"It is a music that is not concerned with just the aristocratic values, or the 'lower-end attitudes,' " he says. "It's really about the coming together of seemingly opposing things. So that tension that syncopation in rhythm, and melody and blues timbre creates is really the essence of our whole culture struggle. It's the reconciliation of differences."

"Well, when we play, we're always interested in playing the history of jazz all the time," Roberts says. "Whatever we need to express the song or the mood we're creating. So we need the history of our culture for inspiration when we improvise."

The Maestro And The Modern

"He could take you from the depths, or to the heights, in less than one measure," he says. "You could tell that he wanted his music to capture the full range of emotion and passion, dignity, sophistication, raunchiness, everything. He wanted all of that to be reflected in his music."

Chronologically, the most modern composer featured on the new album is Thelonious Monk. Roberts demonstrated some particularly Monkish rhythms and harmonies on the Studio 4A piano.

"I think [Monk's] big contribution was just the modern thinking and the intellect behind his approach," Roberts says. "But yet it has such an earthiness at the root of it."

And in closing, Roberts plays a stride-piano take on Monk's "In Walked Bud."