Medical personnel who monitored the CIA's interrogation of detainees at black sites around the world violated medical ethics, says a report from the International Committee of the Red Cross.

Mark Danner, a journalism professor who published the report in the New York Review of Books, says the ICRC report details incidents of sleep deprivation, extensive beating, immersion in cold water and suffocation by water.

"The principle finding is that the Red Cross, which is the guardian of the Geneva Convention, finds and declares bluntly that the interrogation procedures used constitute torture and constitute cruel and inhuman and degrading treatment," Danner tells NPR's Michele Norris.

The report was based on interviews conducted by Red Cross officials with 14 detainees. 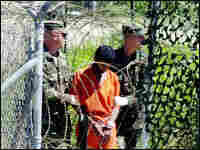 This 2002 photo shows a detainee being guided by two guards at the U.S. military prison in Guantanamo Bay, Cuba. A newly released Red Cross report on torture is based on statements from 14 prisoners who were held in CIA prisons overseas before being sent to Guantanamo. Peter Muhly/AFP/ Getty Images hide caption 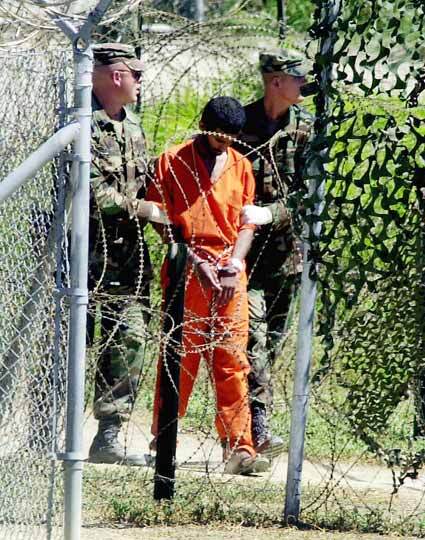 This 2002 photo shows a detainee being guided by two guards at the U.S. military prison in Guantanamo Bay, Cuba. A newly released Red Cross report on torture is based on statements from 14 prisoners who were held in CIA prisons overseas before being sent to Guantanamo.

The International Committee of the Red Cross found that medical professionals helped interrogate terrorism suspects who were tortured in overseas CIA prisons, calling it a "gross breach of medical ethics."

A newly revealed report from the ICRC found that medical personnel monitored prisoners and advised interrogators on how much abuse the prisoners could take.

Experts say the medical ethics issues raised by the CIA torture allegations are about power and conflicting loyalties, as well as violations of the physician's oath to "do no harm."

The ICRC report was based on statements from 14 prisoners who were held in CIA prisons overseas before being sent to the U.S. Naval Base at Guantanamo Bay, Cuba, in 2006. The prisoners said that medical personnel were on hand when they were stripped naked, beaten, shackled for days in "stress positions" and subjected to the practice of controlled drowning, commonly known as waterboarding.

Red Cross investigators wrote that one job of the health workers was apparently to monitor prisoners' vital signs during torture. In one case of controlled drowning, "it was alleged that health personnel actively monitored a detainee's oxygen saturation using what, from the description of the detainee of a device placed over the finger, appeared to be a pulse oxymeter," the report said.

In some cases, the Red Cross said, health personnel advised interrogators to stop procedures that threatened to do permanent damage to the detainees, but only to keep them from being so impaired that the interrogations would have to end.

One prisoner alleged that after a period of "prolonged stress standing, a health person intervened to prevent further use of the method, but told him that 'I look after your body only because we need you for information,' " according to the report.

From Docs To Medics, The Same Rules Apply

Bioethicist Nancy Berlinger points out that the report doesn't specify whether the health workers were doctors or less highly trained personnel, such as military paramedics or emergency medical technicians.

"The ethics are the same for all health professionals," says Berlinger, a scholar at the Hastings Center, a bioethics research institute in Garrison, N.Y. "They're all guided by the principle of 'do no harm.' Physicians have more guidance in this area, but it includes EMTs and paraprofessionals as well."

Berlinger says that health workers who are also military personnel could be faced with the problem of dual loyalties — as soldiers and as healers.

"You're in the military," she says. "You don't have a lot of power in the military chain of command. But if you've been trained as a medic, your skills are not to be used to harm people."

The report also says that health personnel took care of prisoners, sometimes treating injuries resulting from torture or simply dealing with common ailments. Prisoners reported that such care was appropriate and satisfactory, but Berlinger notes that it raises another kind of ethical problem.

She likens it to a civilian situation in which a doctor may be treating a patient for a cold, but sees signs of domestic abuse.

"If you are a conscientious professional and you see that a person is being mistreated in some way, shouldn't you report it?" she asks. In the case of military medical personnel, Berlinger asks, "can you use your chain of command, either military or medical, to stop the abuse?"

Red Cross investigators wrote the report in 2007, but its full contents were kept secret until this week, when it was posted on the Web site of the New York Review of Books by journalist Mark Danner. Danner wrote about the report last month, and New Yorker writer Jane Mayer revealed much of its content in a 2008 book, The Dark Side, but this is the first time the involvement of medical personnel has been made public.

The Red Cross reports on detention policies worldwide, but keeps its reports to governments secret in order to gain access to prisoners.