Accessibility links
DIY Or Die Trying Frugal is the new cool — now. But when commentator Holly Robinson was growing up, frugal wasn't just fashionable: it was a way of life. 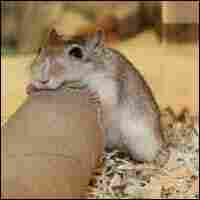 Most people look at a gerbil and see a cute rodent. For Holly Robinson, she sees her father's chief moneymaker. Courtesy of the American Gerbil Society hide caption

My father was a Navy officer who dreamed of becoming the world's most famous gerbil farmer. After a popular magazine hailed gerbils as "America's Newest Pets," Dad was hooked and spent his shore duties secretly raising them in our garage. He was still in uniform when he bought a remote, rundown farm and built a gerbil dynasty.

As Dad's first employees, my brothers and I posed with gerbils for photographs he could use for pet books. We cleaned cages and doled out green food pellets. We stuffed envelopes with newsletters about Tumblebrook Farm, Home of the Gerbil. Meanwhile, Dad constantly reminded us that "frugal" was our new middle name.

Whether my father had wanted to make it big by selling gladiolas or garage doors instead of gerbils, the bottom line of any start-up company is microscopic. Small business owners don't expect bailouts if they fail. Dad reminded us that sweaters were cheaper than heat. His office floor was a flotilla of coffee cans crammed with recycled screws and rusty nails. If something needed doing, we were to do it ourselves, or die trying.

We put our backs into making that old farmhouse a home. We built a stable for our horses out of an abandoned barn that we tore down and hauled across the street on a wheezing, Dr. Seuss tractor. Meanwhile, Dad's gerbils went about the happy business of breeding. When they'd multiplied enough to need a home of their own, we built that, too, turning sheet metal siding and bags of bolts into the nation's first gerbilry.

"Mom, do you mind Dad doing this gerbil thing?" I asked after one sweaty day of hauling metal.

She just shrugged. "Most men have golf. Mine has gerbils. It's bizarre, but that's your father."

With me, Dad was a total stop-spending vigilante. I had already cost him more money than his other children combined; at age 12, my horse bucked me off and I landed mouth-first, losing seven front teeth. The year that Dad built his gerbilry, a dentist crafted a pricey, permanent set of teeth for me. I was thrilled. No more dental humiliations, like the time I laughed at a cute boy's joke and sent my false teeth flying onto his shoe. The down side was that Dad now materialized at my elbow if I did anything more extreme than sleep. "Watch out for your teeth, Holly!" he'd cry, trotting after me. "Teeth don't grow on trees, you know!" 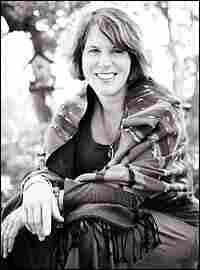 Dad monitored my hot showers to the minute. I turned the toilet paper roll as stealthily as possible, because if Dad heard me using it, he'd come pounding up the stairs to knock on the bathroom door. "No more than three squares!" he'd call. "More than three squares is wasted!"

This penny-pinching paid off. By my third year of college, Dad had nearly 9,000 gerbils housed in three buildings. He proudly announced that we could afford a family vacation. "It's a celebration," he said. "This year, I made as much money as the governor of Massachusetts."

"Of course, the governor enjoys a few more perks than I do," Dad added generously. "A mansion. A staff. A secretary. A car at his disposal, and so forth."

"You have a secretary," Mom reminded him. "Grandmother's right upstairs."

Our vacation home was only a rented camper that carried us to Maine and back. Still, the beaches were cornbread gold and we finally looked like a normal family, with our parents parked in webbed lounge chairs while my brothers and I dashed into the icy waves.

These days, frugal is the new cool. Boxed wine is in. Fashion magazines trumpet that it's chic to shop at Target. Waste not, want not, is the new reality only it feels like old times to me, the daughter of a gerbil czar who wanted to do it all himself.