Accessibility links
Politician Embraces His American And Mexican Roots Abel Maldonado is a Republican state senator who cast the pivotal vote in California's prolonged budget debate. Maldonado is a successful businessman and rising political star, but he won't forget his immigrant parents' humble beginnings in the U.S. 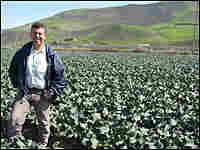 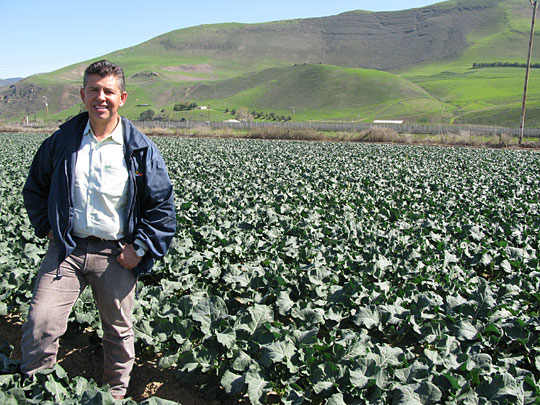 California state Sen. Abel Maldonado stands amid his broccoli and lettuce fields in Santa Maria. Maldonado's father came to California from Mexico and worked as a farmhand.

In California, it can be tough to be a Republican. Tougher still if you're one who voted for the huge tax hike your party opposed. That's how state Sen. Abel Maldonado went from rising star to marked man in the GOP.

Maldonado was born in Santa Maria, but has stayed close to his Mexican roots. His family has a saying: "We came from beans, we can go back to beans," he says. His father never lets him forget the family's humble Mexican roots. Abel Sr. was a poor farmhand who came to central California on a World War II-era temporary worker program. The family spent years struggling.

Maldonado reminisces, as he watches over a crew working some of the several hundred acres the family farms in this sun-drenched valley about 75 miles north of Santa Barbara. "The strawberry fields were my baby-sitting grounds," he says. As a kid, Maldonado helped his dad pick strawberries in the early morning. "And if I didn't have time to shower, I would go to school with strawberry stains on my hands and pants," he says.

Maldonado said the kids would tease him, and at the end of the day when the school bus dropped him at home, the teasing would start up again. "We used to have chickens and some hogs, and they used to get loose and would come and greet me at the bus stop, and that was embarrassing," he says.

Maldonado chuckles that some of those same classmates have come asking for jobs — last year, sales at Maldonado's company, Agro-Jal, approached $10 million.

Maldonado's biography is a classic rags-to-riches story that launched his political career and made him the darling of the state Republican Party and a rising star in national circles.

Until earlier this year, California lawmakers were in a hopeless months-long budget impasse. The state was about to run out of money, and thousands of jobs and programs were on the line. Republicans said no to tax hikes and Democrats needed just one more vote.

Maldonado signaled he was willing to deal.

On the state Senate floor he finally provided the swing vote that passed the budget and raised taxes more than $12 billion.

"This might be the end for me, but this vote ensures that this is not the end for the state of California," he told his colleagues. And holding a photo of his political hero, Ronald Reagan, Maldonado said he couldn't let hard-line partisans bankrupt the state.

It's too soon to say whether Maldonado's vote will bring him fame or infamy. He does have hopes for higher office, and the deal he cut for his budget vote — getting lawmakers to back an open primary ballot measure — may help him get elected without having to win Republican support.

Reflecting on his political future in his Sacramento office, Maldonado says that it's lonely being one of a handful of Latino Republicans.

"The United States of America is changing, and more importantly, California has changed and will continue to change and if they don't get that we will continue to be a minority party," he says.

He says that if politics doesn't work out, he always has a place to go and a quick way to get there: He flies his own single-engine plane in a one-hour flight from Sacramento to the farm office in Santa Maria.

The Maldonado business is very much all in the family: his mom is the receptionist, his sister runs the sales department, his brother runs the day-to-day operations, and Abel Sr. oversees it all.

And on most workdays, the family lunches together in the corporate kitchen in a raucous meal, with Abel Sr., at the head of the table. His sombrero stays on, and a bottle of Tequila and a can of Coke are at the ready. After 40 years living in the U.S., he just recently became a citizen. He says he did it to give his son another vote.

The kids don't miss a beat. They tease their parents for being so old-fashioned. His mom won't use the big stainless steel range, instead favoring cooking the traditional carne asada on a small hotplate. And his dad won't drive the new BMW the kids just bought him for his 60th birthday, except on special occasions.

Maldonado may joke about his parents' frugality, but he also admires it, he says. There are generations, he explains: The first generation are the makers, the second generation spends and the third generation loses it. He's determined not to lose anything, but he does add that there's no shame in being poor. After all, as the family saying goes, "We started on beans we can go back to beans."