Accessibility links
Italy Surveys Quake Damage To Historic Structures The deadly earthquake that rattled central Italy on Monday also took a toll on the region's architectural treasures. Churches and other historic buildings have been destroyed or badly damaged, and the repair costs will put further strain on Italy's overstretched budget. 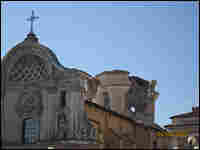 The collapsed cupola at the Church of the Anime Sante is shown Wednesday. Sylvia Poggioli/NPR hide caption 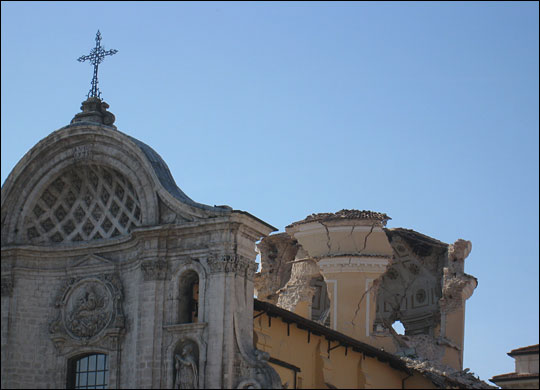 The collapsed cupola at the Church of the Anime Sante is shown Wednesday. 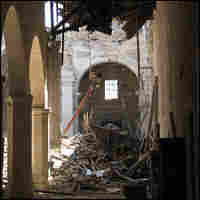 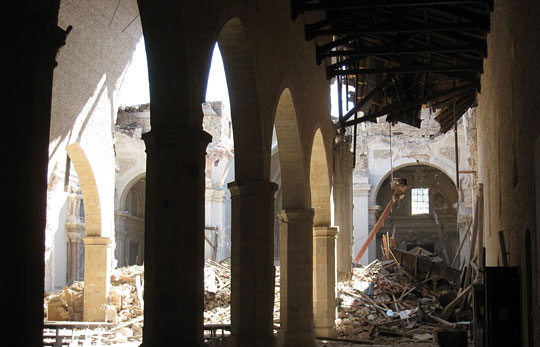 The collapsed apse of the basilica of Santa Maria di Collemaggio is seen Wednesday.

Monday's earthquake in the central Italian region of Abruzzi killed more than 270 people, injured hundreds more and left thousands homeless. The earthquake also has left a swath of severe damage across a major part of the region's architectural heritage.

Churches and other historic buildings have been destroyed or badly damaged, and the repair costs will put further strain on Italy's overstretched budget.

Culture ministry officials are now compiling a list of damaged landmarks in the town of L'Aquila and surrounding areas. Among the entries: the duomo, where the transept has collapsed; the baroque Church of the Anime Sante, where the cupola has all but disappeared; and the Renaissance-era San Bernardino, which has a collapsed bell tower. The building housing the region's historical archives also has been severely damaged.

Maurizio Galletti, the man in charge of the Abruzzi region's artistic and landscape heritage, says these losses are just a sampling of the overall toll.

"The entire territory has suffered unbelievable artistic destruction," he says.

Perhaps the most severe damage occurred to the 13th-century red-and-white stone basilica of Santa Maria di Collemaggio, the jewel of the city and widely considred the artistic masterpiece of the Abruzzi region. The three majestic naves have been laid bare to the elements, the apse has collapsed and a mountain of rubble covers the main altars.

Father Nunzio Spinelli, rector of the basilica, says it was founded in 1298 by Pope Celestine V. Elected pope in his old age, Celestine soon abdicated — the only pope in history to do so. That decision earned him the scorn of the poet Dante, who, in The Divine Comedy, places Celestine at the entrance of hell for his cowardly "great refusal." Now, Celestine's tomb also is buried under rubble.

The continuing aftershocks have inflicted more and more damage on the entire historic center of the city, where the streets are lined with 16th-, 17th- and 18th-century buildings — many of which are teetering.

The entire area has been declared off-limits, and residents are banned from returning to their homes. Soldiers and police patrol the streets to prevent looting.

Culture ministry authorities say a full damage assessment and estimated costs of repair will take time. But they say it is clear that the $45 million in emergency funds earmarked by the government will not be enough, and that Italy will need substantial foreign assistance.

Arts experts already are shaking their heads at the poor state of conservation in Italy — a country with one of the world's richest cultural heritages.

"What is of fundamental importance in this field is constant maintenance," says Emanuela Grifoni, who is studying to become a professional diagnostician of damaged art. "It's unthinkable that we intervene once in a while and then abandon these artistic monuments to themselves. Art conservation is a national responsibility."

But in Italy, Grifoni adds, there's little awareness of the need to safeguard and conserve the country's immense artistic wealth.