Accessibility links
India's Farming 'Revolution' Heading For Collapse Decades after Indian farmers were pressured to abandon their traditional methods for chemicals and high-yield crops, the country's farming system is headed for disaster. One official says if it isn't drastically revamped, the heartland of India's agriculture could be barren in 10 to 15 years.

The first of a two-part series 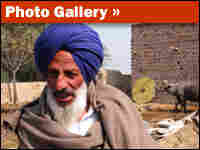 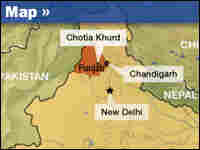 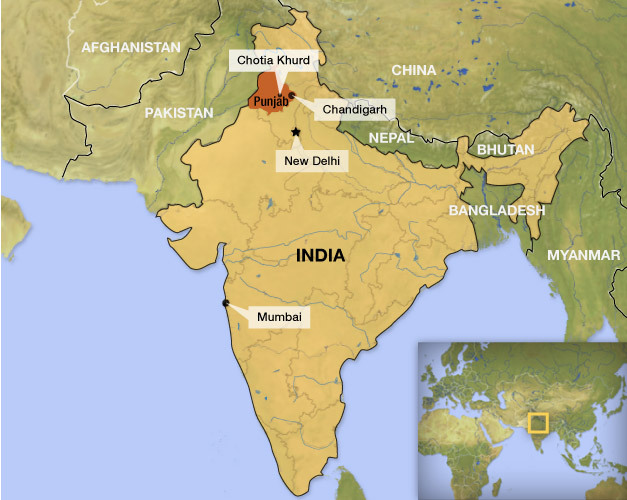 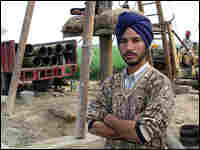 Sandeep Singh says he has been forced to deepen his well, because the groundwater under his fields has been sinking as much as 3 feet every year. Daniel Zwerdling/NPR hide caption 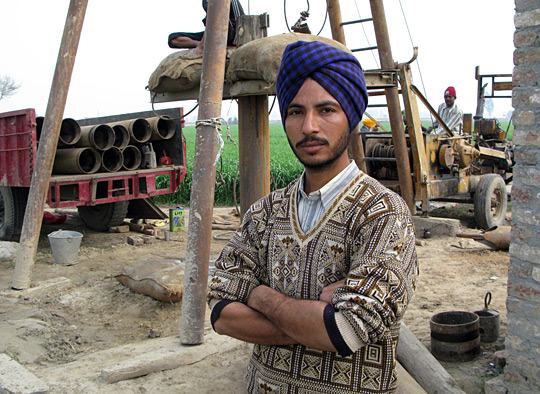 Sandeep Singh says he has been forced to deepen his well, because the groundwater under his fields has been sinking as much as 3 feet every year.

Farmers in the village of Chotia Khurd in northern India don't realize it, but they symbolize a growing problem that could become a global crisis.

They gathered on a recent morning in a stone-paved courtyard — a circle of Sikhs with brightly colored turbans and big, bushy beards — to explain why the famed "bread basket" of India is heading toward collapse.

Their comparatively small region, Punjab, grows far more wheat and rice for India than any other region. But now these farmers are running out of groundwater.

They have to buy three times as much fertilizer as they did 30 years ago to grow the same amount of crops. They blitz their crops with pesticides, but insects have become so resistant that they still often destroy large portions of crops.

The state's agriculture "has become unsustainable and nonprofitable," according to a recent report by the Punjab State Council for Science and Technology. Some experts say the decline could happen rapidly, over the next decade or so.

One of the best-known names in India's farming industry puts it in even starker terms. If farmers in Punjab don't dramatically change the way they grow India's food, says G.S. Kalkat, chairman of the Punjab State Farmers Commission, they could trigger a modern Dust Bowl. That American disaster in the 1930s laid waste to millions of acres of farmland and forced hundreds of thousands of people out of their homes.

The story of Chotia Khurd is a cautionary tale: Political leaders and scientists can't necessarily transplant a technology from one country and culture to a vastly different one and expect it to flourish without serious side effects.

The story begins in the 1960s, when parents in America's well-fed suburbs would admonish ungrateful children to "think about the starving people in India." Occasional news reports told wrenching stories about Indians subsisting on grass and leaves. The country survived on imports, like a beggar.

The public concern prompted a loose coalition of scientists, government officials and philanthropists — spurred and funded, in part, by the Rockefeller Foundation --to launch a "Green Revolution."

In the context of the times, "green" did not refer to what it means today — organic, pesticide-free farming methods. To the contrary, India's farmers were persuaded to abandon their traditional methods and grow crops the modern, American way.

For example, the advisers told farmers to stop growing old-fashioned grains, beans and vegetables and switch to new, high-yield varieties of wheat, rice and cotton. Farmers began using chemical fertilizers instead of cow dung. They plowed with tractors instead of bulls.

The "Green Revolution" of the 1960s and 1970s meant that if farmers embraced chemicals and high-yield seeds, their fields would turn lush green with crops. (An official at the U.S. State Department, William Gaud, apparently coined the term in 1968.)

During the Cold War, the term also implied that if countries like India could stamp out hunger, the population would be less likely to foment a violent revolution and go communist.

In India, ground zero for the Green Revolution was the state of Punjab, which borders Pakistan and the foothills of the Himalayas. And the system seemed to work miracles — for a while.

The United States sent money and technical support, including advisers from one of America's most prestigious agriculture universities. India's government showered Punjab with low-cost chemicals and seeds — and they paid the farmers, in effect, to use them by guaranteeing minimum prices for Green Revolution crops.

It helped India transform itself from a nation that depends on imports and food aid to a budding superpower that often exports grains.

Villages like Chotia Khurd were harvesting three to four times as much grain per acre as they did before.

Many of the farmers and the local government were flush with money. They paved their dirt roads. The farmers replaced their mud houses with bricks and cement. They bought American tractors for a small fortune.

Just about everybody in Chotia Khurd bought cell phones, with a wide variety of ring tones — so it's hard to chat with a farmer without getting interrupted by electronic versions of Sikh chants or theme songs from Bollywood hits.

But government reports and farmers themselves say that era is over — and today, the Green Revolution system of farming is heading toward collapse.

'Farmers Are Committing A Kind Of Suicide'

To show why, the district director of the Punjab Agriculture Department, Palwinder Singh, leads the way up a narrow dirt road into wheat fields that encircle the village.

On the surface, they look robust. The countryside is electric green in every direction.

But Singh points to a large contraption rising above the crop, like a steel praying mantis. The machine is blanketing the countryside with a percussive, deafening roar.

"That's part of our most serious problem," he says. It's a drilling rig. A young farmer in a purple turban, Sandeep Singh, is standing next to the rig, looking unhappy. (The two men are not related — according to tradition, all Sikh men share the last name "Singh," which means "lion.")

When farmers switched from growing a variety of traditional crops to high-yield wheat and rice, they also had to make other changes. There wasn't enough rainwater to grow thirsty "miracle" seeds, so farmers had to start irrigating with groundwater. They hired drilling companies to dig wells, and they started pumping groundwater onto the fields.

But Sandeep says he has been forced to hire the drilling company again, because the groundwater under his fields has been sinking as much as 3 feet every year.

Government surveys confirm it. In fact, his family and other farmers have had to deepen their wells every few years — from 10 feet to 20 feet to 40 feet, and now to more than 200 feet — because the precious water table keeps dropping below their reach.

Nobody was surprised when environmental activists started warning years ago that the Green Revolution was heading toward disaster. But they were astonished as government officials started to agree.

"Farmers are committing a kind of suicide," warns Kalkat, the director of the Punjab State Farmers Commission. "It's like a suicide, en masse."

Kalkat offers an unsettling prediction in a nation whose population is growing faster than any other on Earth: If farmers don't drastically revamp the system of farming, the heartland of India's agriculture could be barren in 10 to 15 years.