Accessibility links
'Let In' The Swedish Vampires In Let the Right One In, Eli and Oskar are both lonely 12-year-olds — but one of them happens to be a vampire. Critic-at-large John Powers calls the Swedish film "the best vampire movie in the last 75 years." 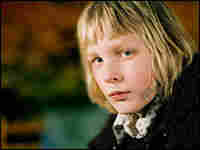 Kare Hedebrant plays Oskar, a bullied 12-year-old who befriends a vampire's daughter in the Swedish vampire film, Let the Right One In. Magnet Releasing hide caption 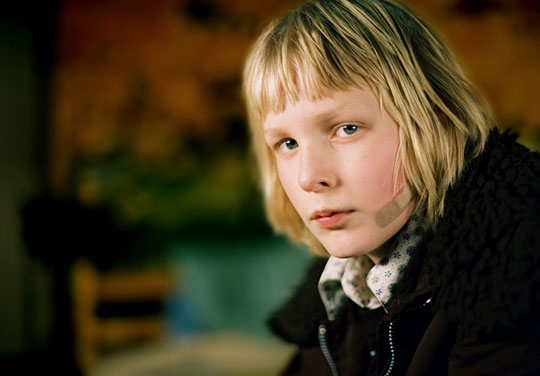 Kare Hedebrant plays Oskar, a bullied 12-year-old who befriends a vampire's daughter in the Swedish vampire film, Let the Right One In.

It's an essential feature of vampires that they're able to live forever. The same is true, it seems, of vampire stories.

Almost two centuries after John Polidori wrote the first vampire tale in English, these blood-drinking fiends are bigger business than ever. Last fall, as our financial firms sank, the blue chip cultural stock of vampirism was soaring, with the blockbuster film of Stephanie Meyer's bestseller Twilight, the launch of the hit HBO series Tru Blood and — last but not least — the art-house cult-favorite that's invariably described as "the Swedish vampire movie."

Its name is Let the Right One In — the title comes from a song by Morrissey — and I'm not exaggerating when I say that it's probably the best vampire movie in the last 75 years. Because it originally appeared in limited release, most of you wouldn't have had a chance to see it. But now it's out on DVD and anyone can marvel at how Tomas Alfredson's brilliant film manages to inject new blood into what seems like an anemic old story.

The scene is a wintry Stockholm suburb in the early 1980s, and the hero is Oskar, a frail, ghostly-pale 12-year-old boy played by Kare Hedebrant. Oskar is an outsider who's alienated from his distant, divorced parents and from the schoolmates who cruelly torment him. He seems hopelessly alone until a potential savior moves in next door. She's a vaguely androgynous, exotically foreign-looking girl named Eli (played by the haunting Lina Leandersson) and her own solitude dwarfs Oskar's. Eli, you see, has been 12 for the last 200 years. By night, she must feed on her neighbors, an odd assortment of boozing oafs and cat ladies.

Drawn together by mutual loneliness, Oskar and Eli become friends. She offers him companionship, love and the possibility of revenge — that school bully better watch out. Oskar, in turn, offers her acceptance — he's charmingly unfazed by the fact she's a vampire — but we've all seen horror movies, so we keep wondering if, and when, his feeling for her might exact a higher price.

Now, with its under-age heroes and flipped gender-roles — usually the male has taste for blood — Let the Right One In is already something special. But the most memorable vampire movies, be it Murnau's Nosferatu or Dreyer's Vampyr, are also triumphs of style. Here, Tomas Alfredson gives us a vampire picture that looks like no other: He has a surgical eye for chilly Scandinavian exteriors and a genuine mastery of shifting tones. He tells Oskar and Eli's story with a gripping sleekness that's by turns spooky, romantic, shockingly hilarious and filled with deep compassion for the pain of adolescent isolation.

It would be going too far to say that Let the Right One In, for all its originality, is doing something unprecedented. We are living, after all, through the great era of woman-centered Dracula revisionism launched by Buffy the Vampire Slayer, the most unexpectedly subversive show ever on American TV. Charged with teen sexual anxiety, today's ruling versions of the vampire story offer something new and sentimental. They feature vampires who, yearning to be human, fight their demonic nature, most famously in Twilight where swoony Edward Cullen refuses to bite, or make love with, the hot-to-trot heroine Bella.

Perhaps I'm just being a middle-aged man, but I find this trend disappointing. I don't want my vampires to be domesticated or self-sacrificing or — dare I say it? — de-fanged. Which is part of what's great about Let the Right One In — its ferocity. Despite looking like a small, harmless child, Eli is never less than a killer whose need for blood remains unabated. She is, in human terms, a monster who cannot escape her eternal fate.

And in this, the movie is a classic vampire story. Although it officially has a happy ending, Oskar and Eli's story carries within it a built-in sense of doom, even tragedy, and not only because when he's 62 she'll still be 12. No, the story is all about the giddiness and solitude of finding a soulmate only to have it be a creature who's inalterably different. Let the Right One In takes its sting from the fact that the one you let in your door may, in the long run, not be so right after all.