Accessibility links
Banks Balk At Dramatic Rise In FDIC Fees Complaining that they're being asked to pay for the sins of others, U.S. banks sound the alarm over an increase in FDIC insurance premiums. In the end, says one bank executive, they'll have no choice but to pass the increase on to ordinary customers. 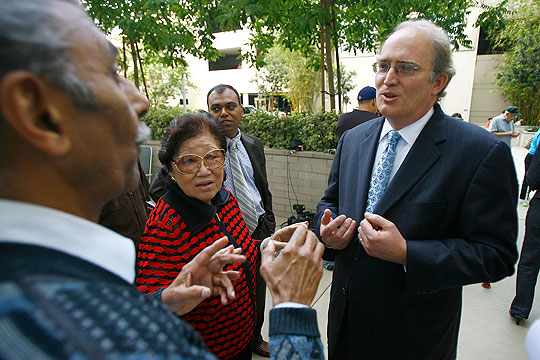 John Bovenzi, chief operating officer of the FDIC, tries to reassure a customer outside an IndyMac Bank in Pasadena, Calif., July 2008.

Discover the economic sins of others ...

Starting in September, American banks began failing — huge ones like Washington Mutual, small ones like the Corn Belt Bank of Pittsfield, Ill. The failures just kept coming, one after another. In the span from Sept. 1, 2008, to April 1, 2009, 36 U.S. banks collapsed.

Each time that happens, the Federal Deposit Insurance Corp. steps in to pay for everyone's insured deposits, an amount up to $250,000 for account holders. Banks pay premiums to the FDIC for that coverage, but the fees weren't keeping up with demand for help.

In response, the FDIC raised its fees — a lot. Last year, says John Bovenzi, chief operating officer of the FDIC, the banks paid $3 billion into the insurance fund. This year, they'll pay closer to $13 billion, and maybe more.

"We're talking about a potential special assessment that could bring the total up to $20 billion for the year," Bovenzi says. "So it is a dramatic increase."

Banks, not surprisingly, sounded the alarm. Salvatore Marranca, CEO of Cattaraugus County Bank in upstate New York, says he got an e-mail alert telling him that everyone's FDIC premiums were going up. It didn't seem to matter whether the bank had been a careful operator or a reckless one.

Marranca calls the increase shocking. He expects fees at Cattaraugus to jump from $30,000 last year to $350,000 this year. That's about a third of the bank's yearly earnings, he says.

"We were very angry that we were paying for the sins of others," Marranca says. "Obviously, the cost of this was because other people were doing silly, imprudent, criminal things. We never got involved in subprime loans. We would never do a loan with no documentation. We didn't cause this problem. Imagine if you had to pay for your neighbor, or your competitor screwed up somehow, and you had to pay for it."

Yes, taxpayers, close your eyes and try to picture a scenario where you pay for the mistakes of others.

Bovenzi can sympathize with Marranca's complaint. In fact, it's very familiar to the FDIC executive. During the savings and loan crisis of the 1980s, community banks raised the ruckus: We didn't do it, it's not our fault; how could the FDIC raise premiums during such hard times?

The FDIC has to strike a balance between the needs of banks and the needs of consumers, Bovenzi says. "The banking industry is responsible for the insurance fund, not taxpayers," he says. "But there's only so much we can charge them at any given time without making their problems much worse."

Raising premiums isn't the FDIC's only approach. It's also asking for an increase in its current line of credit with the U.S. Treasury, from $30 billion to $100 billion. FDIC wants an option to borrow another $500 billion in case of a banking emergency.

But Bovenzi emphasizes that even if the FDIC had to borrow that money, taxpayers would be repaid by banks. Which doesn't mean ordinary folks are off the hook. If banks like Marranca's have to pay more in premiums to the FDIC, they'll likely try to recoup that money from ordinary customers.

If the banks have to pay for the mistakes of other banks, then customers — at least in some small way — will probably have to pay, too.