Accessibility links
China Puts Fizz In Bid To Reduce Carbon Emissions A power plant in China is experimenting with ways to capture and recycle its carbon emissions, producing CO2 to put the fizz in soft drinks and fill fire extinguishers. Researchers hope the pilot project will lead to wider efforts to cut industrial carbon emissions and slow global warming. 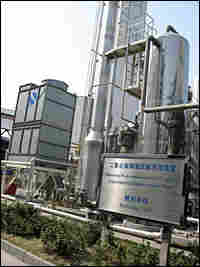 Machinery at the Huaneng Co.'s power plant in Beijing purifies carbon dioxide to 99.9 percent purity, so that it can be used in carbonated beverages. Mo Yang for NPR hide caption 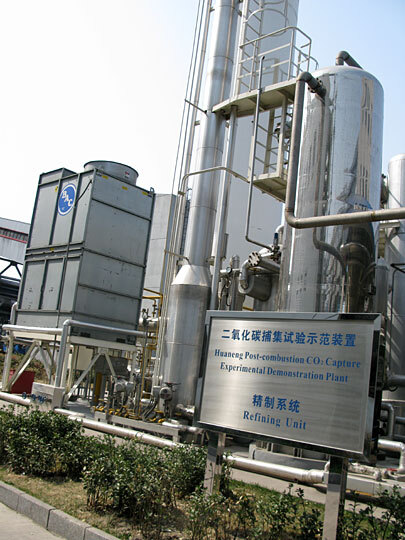 Machinery at the Huaneng Co.'s power plant in Beijing purifies carbon dioxide to 99.9 percent purity, so that it can be used in carbonated beverages.

Recycled soft drink bottles and cans? Nothing new about that.

But one Chinese company is now recycling the emissions from a power plant that puts the fizz in soda pop.

In an effort to cut carbon dioxide emissions and slow global warming, researchers have experimented in recent years with capturing carbon dioxide released from power plants.

But the technology has yet to win wide acceptance, in part because of its high cost and the problem of where to store the captured carbon.

One Chinese power plant has found a novel way to make the technology work, albeit on a small scale.

The plant in southeast Beijing produces 10 percent of the capital's electricity. In a pilot project, an intricate system of pipes and tanks at the plant divert a small amount of the plant's carbon dioxide emissions into a holding tower, where they are absorbed into a chemical solvent.

"The CO2 is then purified, cooled and compressed into a liquid and stored in this tank. A truck comes up and hooks up to this pipe and removes the CO2, just like filling a car with gas," says Xu Shisen, head engineer at the Xian Thermal Power Research Institute, a subsidiary of the state-owned Huaneng Co. that owns the plant.

The recycled carbon dioxide is then sold to a company that resells it as industrial-grade CO2 for use in making dry ice or filling fire extinguishers. Or, the power plant facility can further purify the gas — to 99.9 percent — and sell it as food-grade CO2 to put the fizz in soda pop and carbonated beverages.

This effervescent solution to curbing carbon emissions is, of course, only temporary. The carbon dioxide is only stored until someone releases it, for example, by popping open a can of beer or soda.

Making Progress On A Small Scale

The other problem is that power plants emit far more carbon dioxide than commercial markets can use. Huaneng's plant can only extract and process less than 1 percent of the 5 million tons of carbon dioxide it emits every year.

But just selling that tiny amount of carbon dioxide covers the cost of capturing the carbon, not including their original investment, Xu says.

"And this way, at least there's no need to manufacture more CO2 from scratch," Xu notes, "because that would itself consume more energy and produce more emissions. In the final analysis, we're still reducing emissions this way."

The pilot project has been a success since it began last summer, shortly before the Beijing Olympics, Xu says. It's the first of its kind in China. But the Huaneng Co. is building a second in Shanghai, and other power plants around the country are inquiring about starting their own programs.

Still, it is a long way away from the ultimate goal of significantly reducing China's greenhouse gas emissions, which are on track to exceed those of the U.S., if they haven't already.

But Huaneng is working on more efficient technologies to convert coal used in power plants to a gas and removing some of the carbon dioxide pollutants before the fuel is burned.

"The Chinese program is quite important on a world stage, because China is a very large user of coal for electricity production," says Jim Smitham of the Australian government's Commonwealth Scientific and Industrial Research Organization, which assisted the Chinese project.

"And China is getting an early-stage advantage of getting this familiarity with the technology at small scale, and they're already thinking of how to apply it at bigger scales and for other applications," Smitham said.