Accessibility links
Saint or Sinner? Mexico Debates A Cult's Status The Mexican government and the Catholic Church say shrines to Santa Muerte, the Saint of Death, are associated with the country's rampant and violent narcotics trade. Followers say the folk cult offers solace for the poor. 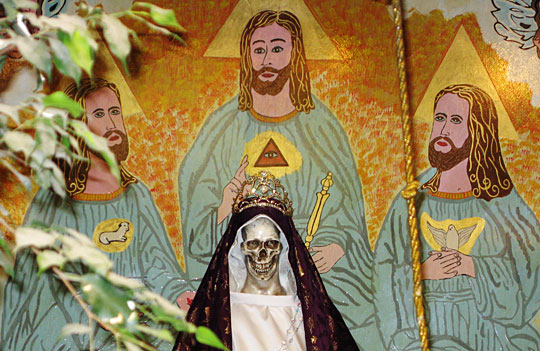 The figure of Santa Muerte, or Death Saint, stands before an altar with traditional Christian religious symbols.

On a dangerous curve in the highway just outside the Mexican border city of Reynosa, two shrines stand behind a battered guardrail.

One is an airy, glass structure holding a statue of the Virgin Mary. Fresh flowers have been laid at her feet.

The other is a dark, shacklike building filled with skeletal figurines of the folk saint known as Santa Muerte — the Saint of Death. Inside the shrine, a life-size skeleton clutching a scythe leans menacingly forward from a black altar. At its feet candles flicker amid offerings of whiskey, cigarettes and candy bars.

Along the border the Mexican army has been bulldozing altars to Santa Muerte, saying the sect caters to narcotics traffickers.

Devotees of the saint deny that they are part of the drug trade. They say Santa Muerte is a positive force who offers them protection and ways to cope with daily life, even though the saint is usually depicted as a robe-draped skeleton that looks like the Grim Reaper.

'You Just Have To Have Faith'

At the roadside shrine near Reynosa, just across the Rio Grande from McAllen, Texas, David Cansino says he believes strongly in Santa Muerte.

"Here you come to ask for the health of someone who's sick or about to have surgery," he says. "For small problems or big problems, there's nothing too difficult for her. She'll give you everything; you just have to have faith," he said.

But the Mexican government is waging a war against the nation's brutal drug cartels, and military officials say that these are narcoshrines.

Last month soldiers destroyed 30 Santa Muerte altars in Nuevo Laredo and several others in Tijuana. Santa Muerte followers have marched in Mexico City to protest the government's destruction of the shrines.

A spokesman for the Roman Catholic Church in Mexico calls the group "diabolical" and says it's no secret that Santa Muerte is associated with organized crime. Tattoos of the "holy dead" are popular in Mexican prisons.

Elsa Malvido Miranda, who studies death and its social significance at the National Institute of Anthropology and History in Mexico City, says some of the followers might be narcotics traffickers, but most are just poor people struggling to survive.

Amid the intense drug violence that has been sweeping Mexico and the current economic hard times, Malvido says it is understandable that shrines to Santa Muerte are popping up across the country.

In Service To The Saint Of Death

At the Mexico City headquarters for the Santa Muerte religion, self-declared Archbishop David Romo says the image of the grinning skeleton clutching a long blade shouldn't be frightening. Instead, Santa Muerte is a reminder of our mortality and the omnipresence of God, he and other devotees say.

Romo preaches from a small storefront in a notoriously rough section of Mexico City. A recent service was attended by about 90 people sitting on flimsy white plastic chairs in the poorly lit room.

In front of an altar that includes images of the Virgin of Guadalupe and Santa Muerte, Romo denounced the recent destruction of altars by the government.

Most of people in the congregation say they follow Santa Muerte not out devotion but out of pragmatism. They recount their beliefs that the saint answered prayers for a new boyfriend, a better job, a negative AIDS test.

"God doesn't see the color of your skin, nor your economic level. God sees you just as you are," Romo said. "You may try to hide your failings from God, but to him nothing is invisible and all your actions count."