Accessibility links
Brown Fat: Don't Try To Burn It Not all fat is created equal, according to several new studies. Researchers found that "brown fat," typically found in babies, is present in adults and has impressive calorie-burning powers. C. Ronald Kahn, of the Joslin Diabetes Center at Harvard Medical School, explains the findings.

Not all fat is created equal, according to several new studies. Researchers found that "brown fat," typically found in babies, is present in adults and has impressive calorie-burning powers. C. Ronald Kahn, of the Joslin Diabetes Center at Harvard Medical School, explains the findings. 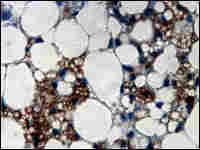 This image shows a cross section of fat tissue from a mouse. The large white blobs are white fat cells. The smaller brown circles are brown fat cells, which burn energy to generate heat. Brown fat cells are actually brown, but these have been dyed to accentuate their color. Patrick Seale and Bruce Spiegelman hide caption 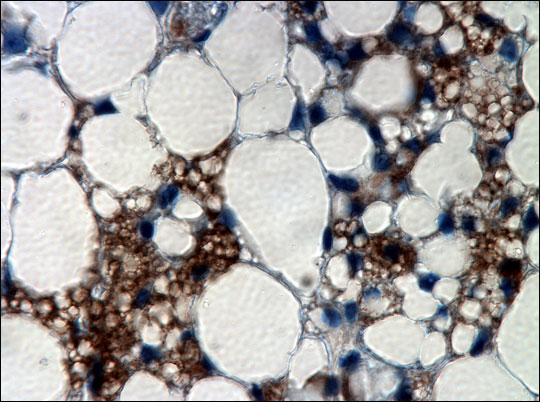 This image shows a cross section of fat tissue from a mouse. The large white blobs are white fat cells. The smaller brown circles are brown fat cells, which burn energy to generate heat. Brown fat cells are actually brown, but these have been dyed to accentuate their color.

We've all been taught that too much fat is bad. But the problem with fat isn't so black and white. In fact, it's brown and white.

White fat — considered the "bad" kind — is a way for your body to store excess energy that accumulates when you consume more calories than you use. White fat comes in handy when you're short on food and your body goes searching for extra energy. But brown fat — the "good" kind — actually burns excess energy to generate heat.

Who Has Brown Fat?

Brown fat is mostly found in newborns. It's arranged in little pockets along the shoulders and between the shoulder blades. It makes up about 5 percent of an infant's total body mass. People have less of it as they age, but researchers now believe that some people maintain brown fat deposits into adulthood. White fat, in contrast, is widely distributed throughout the body, particularly in adults.

Infants are at much higher risk of dying from cold than adults. Brown fat generates extra heat to help babies maintain their core temperature. Researchers aren't exactly sure why small amounts of brown carry over into adulthood, but what they're hoping to do is to find a way to rev up the body's "good" fat to help it burn off the "bad."

White fat does have its benefits. It stores the excess energy and provides us with a layer of insulation that helps keep us warm. But too much white fat can lead to serious health problems.

Brown fat is activated by temperature changes in the environment. When a baby's environment is cold, brown fat quickly begins producing heat. The heat is generated by mitochondria, little energy factories in a cell that turn glucose, fat and other nutrients into a form of energy the cell can use.

Brown fat cells have a higher density of mitochondria than perhaps any other tissue in the body, and defying common sense, it's actually the inefficiency of these mitochondria that makes them so valuable. Instead of breaking down nutrients into energy that the brown fat cell can use, the mitochondria leak out most of the energy in the form of heat.

Small capillaries surrounding the cells then transport the heat energy throughout the baby's body, helping to maintain his core temperature.

Why Is It Brown?

Again, the mitochondria are a defining feature. Brown fat cells are packed with mitochondria, making the cells more opaque. The blood-carrying capillaries that surround the cells also help give brown fat its distinctive color. — Jenny Gold 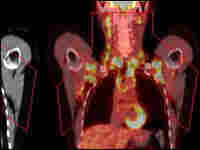 The left image is a PET scan from the study. The dark spots within the red outline are brown fat. The dark areas at the top are the brain and, at the bottom, the heart. The middle image is a CAT scan. The right image shows the PET and CAT scans together. The brown fat deposits show up as green-gray spots in the collarbone and neck area. 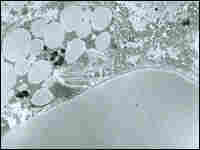 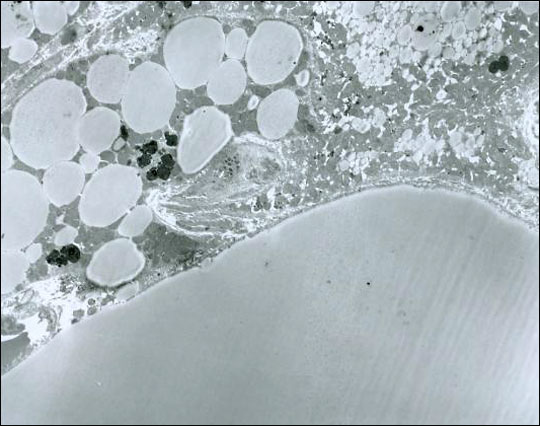 The good fat is medically known as "brown adipose tissue." It's good because it burns calories. The more familiar fat — known as white fat, although it's actually yellowish — stores up calories and stubbornly accumulates around waistlines, thighs and bottoms.

Scientists have known about brown fat for decades. Small mammals and human infants have deposits of it around their shoulder blades. It generates heat and helps maintain the body's core temperature. But until now, conventional wisdom held that brown fat dwindles with age and becomes physiologically unimportant.

Three studies in the current issue of the New England Journal of Medicine overturn that dogma. More importantly, they point to the possibility of a whole new way to help people lose weight and keep it off.

"Up to now, the vast majority of interventions have been targeted toward energy intake — meaning reduction of food intake," says Francesco Celi of the National Institutes of Health. "This is a new tack, a new development."

Scientists are beginning to work on ways to increase people's stores of brown fat and to turn up its metabolism to make it burn calories faster. The idea is to rev up the body's "good" fat to help it burn off the "bad" fat.

It wouldn't take much, says Dr. Aaron Cypess of Joslin Diabetes Center in Boston, an author of one of the new studies.

"We calculate that if you had three ounces' worth [of brown fat], that would be enough, if maximally stimulated, to burn up 400 to 500 calories per day," Cypess says. "A little bit could go a very long way."

By looking at high-tech imaging scans of nearly 1,800 people, Cypess and his colleagues discovered that almost all adults have small deposits of brown fat around their collarbones and in their necks. Women have twice as much on average as men. But even so, most women have only about a half-ounce of brown fat.

The new studies, which also come from the University of Maastricht in the Netherlands and centers in Finland and Sweden, provide some other new insights about brown fat:

-- People have less of it as they age.

-- It's activated by spending even a little time in a chilly room.

The Dutch team studied brown fat activity in 24 healthy young men — 10 of them lean and the others overweight. Study subjects spent two hours in a mildly chilly room — 61 degrees Fahrenheit. Then they underwent PET scans and CT scans to measure the location and metabolic activity of brown fat deposits.

Brown fat showed up as "hot spots" in the scans of 23 out of the 24 volunteers. The one with no detectable brown fat was the most obese.

Researchers don't know yet whether people become obese in part because they lack brown fat, or whether their brown fat stores go away after they become obese.

The Scandinavian researchers found that exposure to chilly temperatures caused a 15-fold increase in the metabolic rate of brown fat in their healthy adult volunteers. They figure that if a way could be found to activate the typical person's stores of brown fat, it would burn off at least 9 pounds of regular (white) fat a year.

Researchers speculate that brown fat could be activated by a drug targeted at particular parts of brown fat's metabolic pathways. Some candidate targets are already known.

Cypess, the Boston researcher, says it's also possible that doctors could remove a small amount of a person's brown fat, amplify it in the test tube, and transplant it back. A drug might be necessary to increase its metabolic rate, too. The result: your own internal calorie-burning furnace.

Or it might not take a drug at all. Maybe just turning down the thermostat or, for those who live in cool climates, spending more time outdoors could help.

"What we need to find out is how many more calories you burn if you sit at home at 60 degrees Fahrenheit versus 72 versus 80," Cypess says. "That may be a very simple way — and a green way — to lose weight and help your health."

But the researchers caution that it might not be that simple. Spending more time in a chilly environment might just make people eat more.