Accessibility links
Latina Actress Aims To Break Maid Stereotype Actress Lupe Ontiveros has built a career on playing immigrant characters. Born to immigrant parents, she has starred as a maid in more than 150 roles, and says she hopes to branch out to roles where the characters have "some chutzpah." 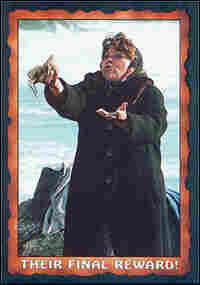 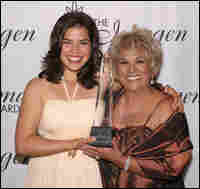 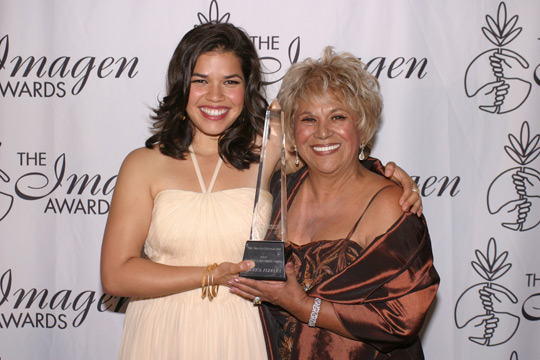 Lupe Ontiveros (right) with America Ferrera, her co-star in Real Women Have Curves. 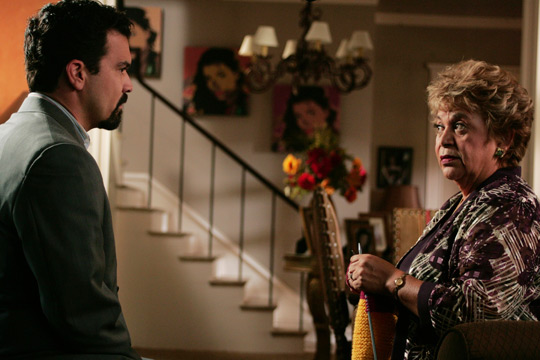 Lupe Ontiveros had an ongoing role in the TV show Desperate Housewives in 2005.

Actress Lupe Ontiveros has built a career on playing immigrant characters. She may not have a household name, but she says that she's been a maid more than 150 times, including on the sitcom Reba and in the films As Good As It Gets, Charlie's Angels and Who's The Boss?

Now in her late 60s, she was born in El Paso, Texas, to Mexican immigrant parents, and she says throughout her career, she has had limited choices for roles.

"You've got maids and you've got maids," she says. "You got maids that have longevity beyond what you ever conceived of in your wildest dreams. I'll give you an example — The Goonies. Those that got hooked — I have a whole following of 30-year-olds who got hooked. Oh my gosh, I'm a heroine to them."

That's because at the end of The Goonies, Rosalita discovers jewels that enable the family she works for to keep their home. Ontiveros says she gets so many immigrant parts because of her indigenous looks. But she has mixed feelings about playing characters that reinforce the Latina stereotype.

She says that when she goes to auditions, she knows what they want.

"'You want an accent?' And they'd say, 'Yes, we prefer for you to have an accent.' And the thicker and more waddly it is, the more they like it. This is what I'm against, really, truly," she says.

In 1983, she broke out of the maid role and starred in what she calls the Godfather of immigration films, El Norte.

"It was depicting a beautiful story line of those two young kids with all of its shortcomings and its horrors, and I had an incredible role in that," Ontiveros says. In the film, she plays an illegal immigrant working in a sewing factory who takes a young girl under her wing. When the young girl gets sick, Ontiveros' character searches for the girl's brother and pleads with him to come visit his dying sister.

After filming El Norte, Ontiveros played more maid parts. She said the work got predictable — taking on roles with names like Rosalita, Camilla and Margarita. But in 2000, Ontiveros's career took another turn. Director Miguel Arteta handed her a script for the movie Chuck & Buck. It was a part written for a white woman.

"Miguel told me to look at the part of Beverly," Ontiveros says. "I said, 'Beverly. You said Beverly. Her name is Beverly.' And I said I'll do it, I don't care what the script is about — I'll do it because her name is Beverly, it wasn't Maria Guadalupe Conchita Esperanza — this Latino stereotype."

"It was so lovely when I got that phone call from her, when she said 'Miguel, this is what I've been waiting for,' " Arteta says. He cast her to star alongside Mike White in the film, and Ontiveros plays a first-time theater director casting Mike White's first play.

Playing 'Someone With Some Chutzpah'

Years later, White wrote a TV drama called Pasadena and couldn't decide whether to call Ontiveros for the maid character, knowing how she feels about playing maids.

"I didn't ask her to do the part in the pilot, but, I ran into her and she was ticked off for [my] not offering her the part," White says. "I was like, 'Lupe, of course I want to work with you again. I think you are genius, but I felt after all of the conversations we had on the set of Chuck & Buck you wouldn't want to be offered the part of a maid.' And, she's like, 'I want to work!' "

She says that the younger generation of Latina actresses, like Jennifer Lopez, Salma Hayek and her friend America Ferrera have different choices than she did. Ontiveros says Ferrera "probably has already formulated the kinds of roles she will or will not accept. She doesn't have to sacrifice her identity, her culture or her dignity to become a star."