Accessibility links
Plastic Peril: Is 'Better Safe Than Sorry' Reason Enough For Law? Sen. Dianne Feinstein invoked the "precautionary principle" when she introduced a bill a few weeks ago to ban a plastic additive called bisphenol A from food and drink containers. She said if we can't prove a chemical is safe, we shouldn't use it. But experts say that's an extreme interpretation --and impossible to follow. 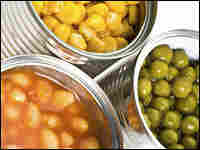 Most tin food cans are lined with a plastic epoxy that contains bisphenol A. Unlike water bottles, this use of BPA is much harder to find a replacement for. iStockphoto.com hide caption

A federal proposal to restrict a plastic additive called bisphenol A (BPA) is focusing attention on a guiding concept known as the "precautionary principle."

The proposal would ban BPA from food and beverage containers. Proponents say the precautionary principle requires such a ban because high doses of BPA can cause reproductive abnormalities and cancer in animals.

But whether you agree with that stance depends on how you define the precautionary principle. It's not written into federal law, and it turns out that people have widely differing views on what it is, and how it should be applied.

BPA In The Body

BPA is used to create polycarbonate plastic products that are clear and durable. It's also used in resins that coat the inside of many food and beverage cans.

In the body, BPA can act like a weak form of estrogen. And studies show that BPA is used so widely that most people have detectable levels.

Scientists don't know whether these low levels of BPA pose a health risk. So arguments about the proposed ban tend to involve discussions of precaution.

The precautionary principle dates back to at least the 1930s, says Jonathan Wiener, a professor of law, environmental policy and public policy at Duke University. He says there are at least three basic forms of the principle, though one scholar found 19 variations.

And then there's the variation that Sen. Dianne Feinstein (D-CA) used last month when she introduced her bill to restrict BPA.

"If you do not know for certain the chemical is benign, it should not be used," Feinstein said.

But that standard has never been part of the precautionary principle because it couldn't be met, says Dr. Ted Schettler, director of the Science and Environmental Health Network, an advocacy group that has warned regulators about the potential risks from BPA.

Even though Schettler disagrees with Feinstein's take on the precautionary principle, he strongly supports her effort to remove BPA from food and drink containers.

Precaution Says To Seek Out Alternatives

Schettler says he backs a more mainstream version of the precautionary principle. It states: "When there are credible threats of harm from some proposed activity, precautionary action should be taken even if some cause-and-effect relationships are not fully understood."

The competing versions of the principle can be confusing, Schettler says. And he says that confusion has been made a lot worse by people who don't want regulators or the government to use any version.

"They say the precautionary principle requires you to ban something if you have the slightest glimmer that it might cause harm," Schettler says. "That is not what it does. It does ask you to look carefully, whether there are alternatives, and then look at the range of activities available to you."

Schettler notes that products like baby bottles are already being made without BPA.

"In my view, we've gathered enough evidence to say that we know enough to act," he says.

The European Union, though, hasn't acted against BPA even though it has a law requiring it to follow the precautionary principle.

Wiener says that's a reminder that Europe's formal endorsement of the principle doesn't mean Europe is always more precautionary than the United States.

"On the contrary, what we find is that there is a complex pattern of particular precautions applied to particular risks on each side of the Atlantic," he says.

Wiener says the European Union is usually more cautious about chemicals than the United States.

In 2006, the EU passed a tough law requiring companies to register the chemicals they use, gather safety information, and switch to safer alternatives when possible.

But Wiener says it was the U.S. that proved more cautious when mad cow disease started killing people in Europe a few years ago.

The United States not only halted beef imports from affected countries, it banned blood donations from anyone who had spent much time in Europe.

That was "a highly precautionary strategy given that the evidence of transmission through blood transfusions was very preliminary and the countervailing risk of not having enough blood in hospital trauma centers was quite real," Wiener says.

Wiener says the United States also maintains tougher standards for certain types of air pollution, and acted sooner to get rid of chemicals that damage the Earth's ozone layer.

Linda Birnbaum, who directs the National Institute of Environmental Health Sciences and the National Toxicology Program, has spent years pondering the precautionary principle.

She describes it in subjective terms: "The precautionary principle says that you act in the presence of concerning information."

In other words, Birnbaum says she finds the information about BPA "somewhat concerning," especially studies showing that the chemical tends to leach out of plastic that's been heated.

"So I stopped microwaving in plastic many years ago," she says, "not because I was convinced it was going to cause harm, but because it just wasn't a necessity."