Accessibility links
Series Overview: Troubled Skies Even in the best of times, airlines struggle. Planes are expensive; labor is highly skilled and mostly unionized; and online search engines make it easy to shop for discounts. Now the great recession is squeezing the industry even harder. 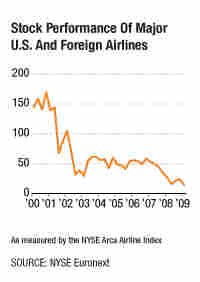 Other Stories In This Series

Even in the best of times, airlines struggle. Planes are expensive; labor is highly skilled and mostly unionized; and online search engines make it easy to shop for discounts.

Now the great recession is squeezing the industry even harder. With the economy shrinking, both business travelers and vacationers are canceling trips. To cope with falling demand, airlines are cutting flights and slashing fares. Makers of corporate jets also are cutting production as customers cancel their orders.

In a new series, "Troubled Skies," NPR reporters explore the problems, within both industry and government. NPR's Ted Robbins found some 200 airlines parked in the world's largest commercial aircraft storage facility in the Arizona desert. Last year, it was domestic carriers parking planes. This year, foreign carriers are grounding them in large numbers.

For passengers, the cutbacks mean fewer flying options. People who live in major, competitive markets are benefiting from falling airfares. But for those who use smaller airports, air travel is getting tougher. Robbins found that at Tucson International Airport, airlines have dropped flights to nine of 15 direct destinations in the past year.

Airlines are hurting not only because of a bad economy but also because of Congress' failure to settle on a way to fund upgrades to the air traffic control system. Reporter Audie Cornish found that on Capitol Hill, lawmakers realize they need to update the radar system developed more than 40 years ago to guide aircraft. But for nearly two years, they have been wrangling over how to generate billions of dollars for a major upgrade. Congress, the airlines and operators of small aircraft can't agree on how to split the costs.

Part of the reason the funding debate has dragged on so long has been the lack of leadership at the Federal Aviation Administration. The agency has not had a leader since August 2007 because the Democratic-led Senate would not approve President Bush's pick. Now President Obama has nominated Randy Babbitt to head the FAA. He is a former pilot for the defunct Eastern Airlines, a former head of the pilots union, and more recently, an aviation consultant. If the Senate confirms him as expected, Babbitt will take control of an agency with piles of problems even beyond the outmoded equipment.

NPR's Peter Overby also found plenty of problems in the corporate-jet business. Last November, the industry fell out of favor when the Detroit automakers' CEOs couldn't explain why they needed to fly in corporate jets to seek financial help from Congress. Since then, the makers of small jets have been slowing production lines and laying off workers.

All of these problems mean fewer planes landing at airports. One hard-hit airport is McCarran International in Las Vegas. Traffic is off more than the national average as leisure travel dwindles and companies cancel conventions. The Vegas Convention and Visitor Authority is aggressively marketing the destination, and travelers can find big bargains. But still, the loss of air traffic is hurting everything from car rental companies to casinos.