Accessibility links
Lisa Hannigan Interview: Stitching Together A Solo Debut Two years after her sudden dismissal from Damien Rice's band, in which she sang backup for seven years, the Irish singer has crafted her first solo album. Literally, crafted: Not only did Hannigan write the music, but she also hand-stitched the liner notes. 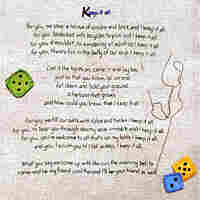 The hand-sewn lyrics to the song "Keep It All." Courtesy of ATO Records hide caption 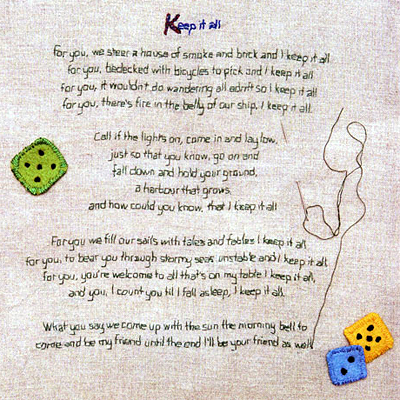 The hand-sewn lyrics to the song "Keep It All." 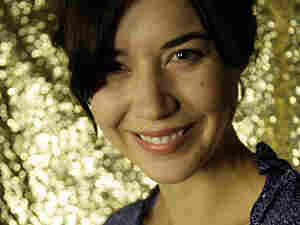 Two years after her professional split with Damien Rice, Lisa Hannigan has released a solo debut in the U.S. Graham Keogh hide caption

Now, she's out with her debut solo album, called Sea Sew. When she was young, she'd spend summers in a little fishing village by the sea, where her mother's family is from. And her lyrics often draw from the imagery of the ocean.

The "sew" part becomes clear when you take a look at the liner notes inside the CD package. The words to the songs are stitched — literally hand-stitched, every letter — to a piece of linen.

"I made the whole thing — I have it at home, and it's about twice the size of the CD case," Hannigan says. "It's all stitched and sewn and ironed and full-sized."

In an interview with Melissa Block, the 28-year-old Hannigan says she wrote and then sewed the lyrics herself.

"It took May," she says. "It took a month, in all, to do. But I really enjoyed it, because it was at the end of the process of making the record, so I'd had all the writing and arranging and rehearsing. Then I took this time — I gave myself a month where I just was doing the artwork. And it was a really lovely, kind of solitary time for me."

And then it was all photographed for the liner notes.

"I just wanted everyone that had the record to — for it to be sort of special," she says. "Because music is so — it's so easy nowadays to send it through the Internet. It's like sending an e-mail as opposed to getting a letter. And I wanted people to be able to hold it in their hand, and for it to be quite a tangible, textural thing. I think it worked."

In preparing the songs for recording, Hannigan says she arranged all the material and rehearsed her band on a farm in the Irish countryside. But first she had to write the music.

"Most of the songs — I tend to go away and write by myself," she says. "Or start something, and then maybe go for a walk, and go for a big — hours and hours, really, and come back with threadbare boots and half a song, you know?"

Many of the songs on Sea Sew are accented by odd sonic elements — what Hannigan calls "funny noises." She says that was part of the idea.

"When we started recording, I wanted it to sound like rusty custard," Hannigan says. "Well, I wouldn't recommend eating it — it sounds quite dangerous. But I wanted that sort of rusty, creaky sound — and just that warm-and-creaminess as well."

On "I Don't Know," for which a music video was commissioned, Hannigan sings, "I don't know if you can swim / If the sea is any draw for you."

"It's that moment where you see the turn of somebody's elbow or a book peeking out of someone's bag on the train," Hannigan says. "And — I do this anyway — I sort of construct a person behind it, invariably positive. And I think that song is about that moment, where you're sort of full of hope about someone you really have no idea about."

Elsewhere, on "Lille," the album's lead single and last tune, Hannigan finishes with an a cappella moment. She says she wanted to end the record with that particular song, but that decision didn't necessarily have anything to do with the way she sang it.

"It always makes me smile when I'm singing it," she says. "Even if I'm not necessarily [smiling] at the beginning, I am at the end. And it was the first song I wrote when I left the band."

Hannigan was abruptly fired from Rice's band about 10 minutes before a show. But she says it was a long time coming.

"We'd worked together for seven years," she says. "So it was a long enough time to be working with anyone. And I think it had just come to the end of its natural life, really."

Despite the circumstances of its creation, Hannigan says that "Lille" is a hopeful song.

"It could have been quite dark. But I think it's definitely shining a positive light on stuff, as opposed to a negative. I suppose you can't really shine a negative light on things, can you?"