A special U.S. Navy operation freed Richard Phillips — the captain who was held captive by Somali pirates for five days off the east coast of Africa. U.S. Navy snipers shot to death three of the pirates on Sunday.

It's MORNING EDITION from NPR News. I'm Renee Montagne. And it turned into a joyous Easter for Richard Phillips. He's the cargo ship captain who was held captive by Somali pirates for five days off the east coast of Africa. In a dramatic rescue, U.S. Navy snipers yesterday shot dead three pirates who were holding the captain at gunpoint in a lifeboat. A fourth pirate surrendered. Phillips is now safe aboard a U.S. warship, preparing to return to his family in Vermont. NPR's Tom Bowman has the story.

TOM BOWMAN: The beginning of end for the pirates came soon after negotiations broke down. One of the Somali pirates was aboard the American destroyer, the USS Bainbridge, in talks with naval officers. The pirates demanded money, or threatened to kill Phillips. The officers told them ransom money was not possible.

Vice Admiral BILL GORTNEY (U.S. Navy): We explained to him that there aren't many good options by not giving up and giving us the captain back.

Vice Admiral GORTNEY: It got heated, and the on-scene commander interpreted hostile intent by the pirates.

BOWMAN: Hostile intent from the three other pirates - they were just 90 feet away, inside a covered lifeboat being towed by the destroyer during the negotiations. The lifeboat was bouncing in the wake of the increasingly choppy seas.

Vice Admiral GORTNEY: The pirates were armed with AK-47s, had small-caliber pistols, and they were pointing the AK-47 at the captain.

Vice Admiral GORTNEY: The on-scene commander saw that the weapon was aimed at him, and took it that that pirate was getting ready to use that weapon.

BOWMAN: Navy SEAL commandos armed with high-powered rifles watched closely from the rear of the Bainbridge. Gortney says they could see the pirates in the lifeboat pop their heads up.

Vice Admiral GORTNEY: The snipers positioned on the fantail of the Bainbridge observed one of the pirates in the pilot house, and two pirates with their head and shoulders exposed.

BOWMAN: The SEALs took careful aim at their targets and fired. All three pirates were dead. Some of the SEALs slid down the tow rope to the lifeboat. Others pulled alongside in their own inflatable boat. Phillips, a 53-year-old longtime seaman, was pulled aboard the Bainbridge unharmed. His family says a chocolate Easter egg is waiting for him at home in Vermont.

Vice Admiral GORTNEY: We are working the transport to get Captain Phillips home to his family as quickly as possible.

BOWMAN: Phillips was praised as a hero by his shipmates. Five days ago, pirates came aboard his ship, the Maersk Alabama, and demanded ransom. The crew refused to cooperate. They disabled the ship and held one of the four pirates. Suddenly, the pirates grabbed Phillips. He agreed to leave with them in the ship's lifeboat. The rest of the crew were able to sail away in the cargo ship once the Navy arrived. On Friday, three days into his ordeal, Phillips jumped from the lifeboat at midnight. The pirates shot at him, then swam after him, pulling him back to the boat.

During the past year, there've been dozens of commercial ships grabbed by pirates for ransom in the waters that stretch from the Gulf of Aden to the coast of Somalia. This is a first time a U.S. flagship and American crew were attacked, and that brought a response from the U.S. Navy. Crews normally cooperate. Companies usually pay millions of dollars to pirates for the safe return of cargo and crew. There is rarely bloodshed. Now, Gortney says this rescue ending in the death of three pirates may signal a new, more brutal phase in the piracy.

Vice Admiral GORTNEY: This could escalate violence in this part of the world, no question about it.

BOWMAN: Now, there is at least an escalation in American naval power. The top American commander in the region, General David Petraeus, has ordered more warships to the waters off Somalia, now the center of pirate activity.

This photo released by the U.S. Navy shows Maersk Alabama Capt. Richard Phillips (right) standing alongside Cmdr. Frank Castellano, commanding officer of the USS Bainbridge after being rescued by U.S. Naval Forces off the coast of Somalia on Sunday. AP/U.S. Navy hide caption 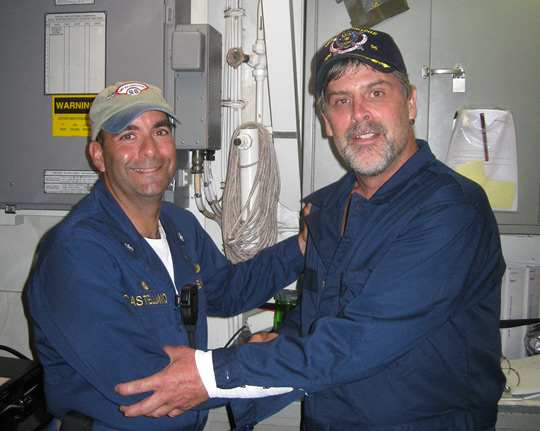 This photo released by the U.S. Navy shows Maersk Alabama Capt. Richard Phillips (right) standing alongside Cmdr. Frank Castellano, commanding officer of the USS Bainbridge after being rescued by U.S. Naval Forces off the coast of Somalia on Sunday.

Statement By The President On The Rescue Of Captain Phillips April 12, 2009

The U.S. Navy rescued American cargo ship Capt. Richard Phillips from Somali pirates in a daring operation on Sunday. Three of his captors are now dead, and a fourth is in U.S. military custody after sharpshooters on the USS Bainbridge were able to get clear shots of the three men holding Phillips hostage.

Navy officials said that President Obama had given permission Saturday to move in militarily if at any time military officials felt the 53-year-old Philips was in imminent danger. And that seemed to happen on Sunday. That's when Navy snipers aboard the USS Bainbridge spotted the pirates pointing an AK-47 at Phillips' back. They were concerned that they were about to shoot the American captain — so they took out the Somalis.

The U.S. sharpshooters aboard the Bainbridge were only about 100 feet away when they took their shots. At the time, the Bainbridge was towing the lifeboat, which had run out of fuel several days ago. Phillips was just feet from the pirates when the snipers opened fire.

The three pirates on board the lifeboat were killed. Phillips was pulled from the lifeboat and transported to the Bainbridge. It was there that sailors delivered a note to him from his wife that read: "Your family is saving a chocolate Easter egg for you, unless your son eats it first." Gortney asked his wife to make sure to save the egg for her husband.

A photograph, showing Phillips shaking hands with the commanding officer of the Bainbridge, showed that the cargo captain was healthy and unhurt from his ordeal.

The dramatic shootout took place at the end of four harrowing days of negotiations and brinksmanship with a ragtag group of Somali pirates who had originally set out to hijack the Maersk Alabama — a U.S.-flagged ship full of African relief aid — hoping for a hefty ransom. Instead of a compliant crew, however, they found a group of Americans who not only refused to give up their vessel but actually at one point took one of the pirates hostage. Crew members say they tried to trade the pirate for their captain, but the pirates reneged on the deal. The pirates then took Phillips off the ship and into a covered lifeboat, demanding a $2 million ransom for his safe return.

A little more than a day later, FBI negotiators and U.S. Navy were on the scene. They began by boarding the Maersk Alabama and taking the ship and its crew to Mombasa. That left Phillips and the four pirates bobbed in the Indian Ocean in a small, 18-foot covered lifeboat. There was food and water on the boat, and a radio, which the U.S. Navy used to communicate with the pirates and Phillips himself.

On Friday, officials say Phillips tried to escape and dove into water; the pirates shot at him and then fished him out of the ocean. He was unhurt and negotiations continued.

Gortney said the Navy had every intention of allowing the talks to work toward a nonviolent end. But it became increasingly clear that Phillips' life was hanging in the balance, he said. Tensions were rising. The pirates had threatened to kill Phillips if the ransom wasn't paid. Officials didn't want to take any chances, so as tempers flared and it appeared they had a clear shot at the three pirates, they took advantage of the situation.

A fourth pirate was on board the Bainbridge negotiating Phillips' release when the shooting occurred. He is now in custody. The Justice Department will decide whether to prosecute him in the U.S.

Both the lifeboat and the Maersk Alabama are considered crime scenes. The FBI is talking to the crew of the ship in Mombasa now to start gathering evidence for a criminal trial.

Phillips could be back with his family in Vermont as early as Tuesday.