Accessibility links
Keeping The Native Nipmuc Language Alive Native American languages have slowly been vanishing as tribal members and cultures have died out. But one electrician in Brimfield, Mass., is doing all he can to keep the Nipmuc language alive, by teaching language classes and inspiring young children to keep the heritage strong. 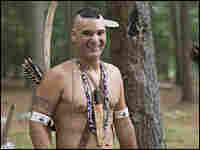 About 'We Shall Remain'

In conjunction with the television series We Shall Remain, airing Mondays on PBS in the coming weeks, NPR is presenting four radio stories reporting on contemporary Native American lives. This story is the first of four that will air within the next month.

PBS: 'We Shall Remain' Series

Today, fewer than 10 people speak the Algonquian dialect spoken by the Nipmuc people. Tribal elders and teacher David White have tried to restore the dialect using documents from the 17th and 18th centuries. Below, watch White teaching a language class. 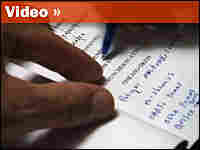 Some scholars estimate that at the time of Columbus, there were roughly 300 native languages spoken in North America. Many of them are now extinct. But David White, an electrician in the small town of Brimfield, Mass., is on a mission — to save his native language, Nipmuc, from dying.

On busy days, his van doubles as an office. After placing an order for some parts, he travels to a modest, one-story home near Brimfield, where he installs some light switches.

But he's finding it challenging to explain what he's doing in Nipmuc: "I don't think there's any word for switch, or electricity for that matter. Maybe you could say "lightning" would be electricity, and lightning is ptoquahin," White says. "Caged lightning, I guess. I don't know how you'd say lightning in a cage, but I guess that's how you'd describe it."

Some scholars have already written off the Nipmuc language as dead, but White counters that at one time, authorities claimed the Nipmuc themselves had died out.

Today the Nipmuc are in a peculiar position: recognized as a tribe by the state of Massachusetts, but not as a nation by the federal government. And there are only about 10 people who speak Nipmuc.

"When I was young, I didn't hear the language at all until, I think it was when I was around 10 or 11, when I started going to powwows," White says.

The language was spoken in the circle in the opening prayer. In the 1950s, as part of a growing pan-Indian movement, the Nipmuc adopted the Western tribes' tradition of the powwow for gatherings and ceremonies. It was at one of these gatherings that White first heard a traditional Nipmuc prayer. The prayer thanks the Great Spirit for the day, for health, for the tribe and for all living creatures — and as White says, everything we take for granted.

"Oh, it was beautiful, I was just so amazed by it, and it sounded so beautiful to me, and I wish I could talk like that," he says. "Of course I had no idea what it meant when I heard it."

Tribal elders were using preserved fragments like the morning prayer, along with documents left behind by colonists and missionaries, to reconstruct the Nipmuc tongue.

"When I was named, I had my first interactions with our spiritual leader, Little Turtle. I was 11 years old and quite scared when I first met him, in his regalia," he says. "Just his demeanor — I was pretty scared. Even though he was a small frail man, he was very powerful in his aura, in his demeanor."

Little Turtle gave White the name "Tall Pine." And in spite of his initial intimidation, White joined the small language class taught by Little Turtle and quickly became his most enthusiastic student. After about 10 years, when the elder was increasingly ailed with emphysema, he made a powerful request.

"He said, 'I'm getting ready to walk on, and I want you to keep the language classes going. I just want to make sure there's somebody that will keep this going on, and I'm asking if you would do that for me,' " White recalls. "It was tough — not to answer the question — but it was tough to know he wasn't going to be around anymore. Because he was the strength of our people — that spiritual strength. That was the hard part."

Five years later, White is still teaching — not only the original study group, but to new students in three new classes.

It's harder these days for White to pay for class supplies, as along with more than half a million Americans, he lost his job in February. And while he's looking for another job, he still makes time on Saturday afternoons to teach the classes to children.

"They tell their friends about it," he says. "They're so proud because it's something they have and nobody else has. They can say, 'I know how to do this. This is my language. I'm Native American. I'm Nipmuc — this is my language.' They feel very proud about that, and it's a wonderful experience to work with kids."

White loves working with the kids and fulfilling the promise he made to Little Turtle years ago. No one can call the Nipmuc language dead, he says, as long as he's keeping it alive.