Accessibility links
Compassion: Easier For A Broken Leg Than Heart If you see a friend break a leg, you'll wince almost immediately. But responding to the emotional pain of another person's broken heart is not quite as easy. A new study suggests that the brain has to work a lot harder to react to another person's psychological pain than to physical pain. People aren't born with compassion — they have to learn it. 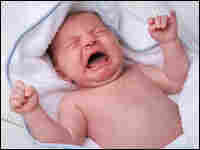 People are born hard-wired to react to other people's emotions, such as as pain or fear. When one baby starts crying, other babies tend to join in. iStockphoto.com hide caption

When we see someone with a broken leg, we feel his pain instantly. But it takes a bit longer to feel compassion for a broken heart, say researchers from the University of Southern California.

A team led by Mary Helen Immordino-Yang used functional MRI to study the brains of 13 people as they responded to stories designed to provoke a range of emotions.

Immordino-Yang reported in the online edition of the Proceedings of the National Academy of Sciences that it was easy to get people's brains to react to another person's physical pain. All it took was a few seconds of video.

"For example, a tennis player reaching for an outside shot," Immordino-Yang says. "And then you just see her ankle break as she lands on it."

The response is immediate because people are born hard-wired to react to other people experiencing simple emotions like pain or fear, Immordino-Yang says. That's why when one baby starts crying, other babies tend to join in.

And there's evidence that a basic ability to feel another's pain emerged pretty early in human evolution, says Antonio Damasio, a co-author of the study. Damasio is the David Dornsife Professor of Neuroscience at USC and the director of USC's Brain and Creativity Institute.

Damasio says early humans were probably more likely to survive if they could tell when a friend needed help or a foe was in pain.

"It probably took longer in evolution to get to a stage in which human beings could look at another human being, not see anything externally wrong with them, but imagine that there was something quite wrong in terms of their feelings, in terms of their mental pain," he says.

Damasio says people still aren't born with this sort of compassion. They have to learn it.

And the USC team found that the brain had to work a lot harder to react to another person's psychological pain than to physical pain.

Immordino-Yang says the team was able to induce that sort of compassion using recordings of real stories told by real people. One involved a woman with cerebral palsy who had given up hope of having a romantic relationship.

And the team was also able to provoke admiration — another complex social emotion — with stories about people helping the poor or disabled.

Damasio says brain scans showed that even the most complex psychological emotions engaged many of the same brain systems that responded to physical states.

But Immordino-Yang notes that it took the brain up to six seconds to react to a complex emotion like emotional pain, while reactions to physical pain occurred almost instantly. Reactions to emotional pain also took much longer to dissipate.

That raises questions about the effects of news programs and video games in which a traumatic psychological event may flash by in a just a second or two, Damasio says.

He says that might not be long enough for children who are still learning compassion.

"What if it is happening to a child who does not have parents or a guardian around who can say, well, 'Wait a minute, there are terrible implications for the person who just underwent that particular event'?" Damasio says.

Without that sort of help, some children may not acquire the full range of compassion for other people, Damasio says. They also might not develop admiration for people who do virtuous things.

Damasio says that would be a big problem because compassion and admiration help anchor moral systems — and society itself.