Accessibility links
Ship Operators, Insurers Nervous Over Pirate Woes The hostage drama involving ship Capt. Richard Phillips is over, but there's no sign that the piracy problem is going away in the Gulf of Aden. This has made ship owners and the companies that insure them worried about conducting business in the high seas. 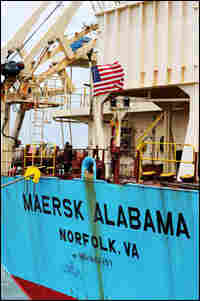 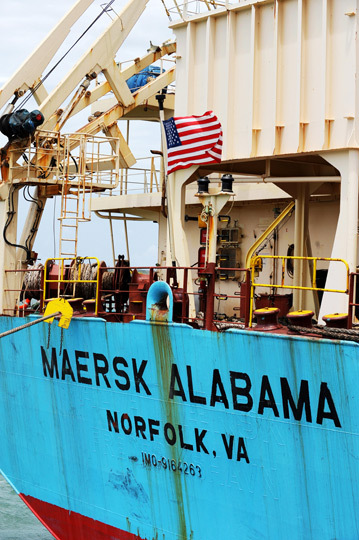 The U.S. merchant ship Maersk Alabama sits moored in Mombasa, Kenya, on Sunday. Shipping companies and insurers remain concerned about the future use of commando actions against pirates.

The successful rescue of Capt. Richard Phillips from the hands of Somali pirates continues to reverberate. Some pirate leaders are warning that they will take revenge on other American ships.

President Obama said the U.S. is resolved to confront the pirates and make sure they "are held accountable for their crimes."

Ship operators and their insurance providers, like everyone else, intently followed the story of how Phillips was rescued from his pirate captors; but one line in Vice Adm. William Gortney's account especially caught the attention of people in the shipping industry: "This could escalate violence in this part of the world, no question about it."

Piracy had already been on the increase off the east African coast. Generally the ship owners — or their insurance companies — have paid million-dollar ransoms to get the crews and their cargo freed. But the consequence has been higher insurance premiums.

Now, in the aftermath of three pirates being shot dead, the pirates' leaders say they'll be even more aggressive. Paul Bingham, who follows the shipping industry for IHS Global Insight, an economic intelligence firm, says shippers have reason to feel nervous now.

"I think there's a lot of apprehension in terms of what it's going to do to either their costs of delivery of their goods, or perhaps the reliability of the service in providing it," Bingham says.

If insurance rates are too high, and the risk of pirate attacks is too great, Bingham says shipping lines will change their routes — avoiding the Suez Canal and the Gulf of Aden and taking their cargo all the way around the Cape of Good Hope. But the longer ships are at sea, the greater the shipping costs.

In the shipping business, piracy is an economic problem. But up to now, neither the big shipping lines nor the insurance carriers have argued loudly for aggressive military actions of the sort carried out Sunday by the U.S. Navy.

Bingham says that in most cases, when ships are hijacked, shipping companies just negotiate with the pirates. "The ransom gets paid to resolve the situation. It becomes a cost of doing business," he says.

One London-based attorney who represents maritime insurance underwriters and ship owners told NPR on Monday that his clients are generally uneasy with the idea of commando actions against pirates. He asked not to be identified by name because of the sensitivity of the issue. If the military action fails, he says, there could be a catastrophic loss. And that could well be greater than the more modest cost of paying the ransom.

Bingham says an important factor is whether ship owners or insurance carriers are feeling patient. The rescue of Phillips, he points out, unfolded relatively quickly.

"If this had gone on for a month, I think the shipper would have said: 'Well, let's just pay the ransom and get me my cargo. This is starting to cost me some money.' "

There is one other issue that is likely to come into play in the future. Phillips' ship — the Maersk Alabama — was a U.S.-flagged ship with an American captain, an American crew and American cargo. Far more typical is the case where a ship flies the flag of one country, but has an owner from a different country and an international crew. In that situation, shipping experts say, a military intervention is less likely because no single country feels its interests are at stake.