Accessibility links
Al-Qaida-Inspired Groups on Rise in Lebanon Islamic militancy has been growing among the Sunni Arabs of Lebanon, and al-Qaida is a new element in the radical mix, security sources say. 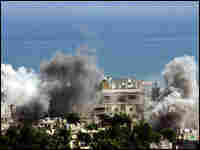 Smoke billows from the Palestinian refugee camp of Nahr Al-Bared near Tripoli in northern Lebanon on May 21. Ramzi Haidar/AFP/Getty Images hide caption

Islamic militancy has been growing among the Sunni Arabs of Lebanon.

In just the past two days, at least 50 people have been killed on the outskirts of Tripoli between government troops and Islamist militants holed up in a Palestinian refugee camp.

Some of these militant groups proclaim their presence on the streets, with black flags posed in traffic islands and on street corners. Others are less obvious.

"There is not an area that is radical, but in every poor area you will find groups of radicalization. This is fertile ground," says Ali Ibrahim, who works with an established Islamist group in Tripoli.

The war in Iraq has accelerated recruitment to these groups. Some in Tripoli fought with Iraq's Sunni insurgents and came back to Lebanon to recruit others. Lebanese security sources say neighboring Syria is a big part of the problem, turning a blind eye to a smuggling route from Iraq, through Syria, to Tripoli. Syria denies any involvement.

But al-Qaida is a new element in the radical mix, security sources say.

Fateh Al-Islam, a relatively new group inspired by al-Qaida, is challenging the Lebanese army in Tripoli.

Lebanese journalist Fidaa Itani said that other al-Qaida-linked groups have come to Tripoli as well. He says these Arab militants have organized underground cells.

The political crisis in Lebanon leaves an opening for al-Qaida, says Bruce Reidel, of the Saban Center at the Brookings Institution in Washington, D.C. He added that al-Qaida looks for local groups with a shared ideology – of which there are many among Lebanon's Sunni Muslim militants.

The government has been paralyzed since December when Shiite Cabinet ministers resigned and the opposition launched a campaign to topple the government.

"It's precisely the kind of political meltdown that al-Qaida thrives in," says Reidel. "It particularly looks for franchises in failed or failing states — and we've seen Lebanon, a divided state, is perfectly made for al-Qaida to operate in and we've seen in the last year or so al-Qaida trying to put roots down there."